With Jonno left in the thrall of Sapporo I jumped on a train to Niseko, to ski Grand Hirafu, even though I had no idea how to ski. I'm coordinated enough I thought to myself. I got this.

Now I should explain the timeline here. It is now almost six years to the day I went to Niseko and I am finally writing the last chapter of this trip. I am now currently living in a ski village and have some decent skills on both a snowboard and on skis; skills that I can confidently say I did not have the first day I attempted to place my ski boot into my binding.

The trips to and from the mountain are about as blurry as staring through a train window. There was a train and shuttle bus and visa versa and I managed to get myself there and back without a memorable drama but that's about all I remember. Oh and it was a near blue sky day and the view out window of the train captivated me the entire way to the slopes.

But the skiing, oh I remember the skiing. I remember studying the map and chosing a green run (beginner) to start on, only the chair I took placed me on a blue (intermediate) run. Of course I fell off the chair lift and was holding my skis. Somewhere along the way I found a cat track that I assumed lead to the green run, decided to get those skis on and give it a try but I could not for the life of me get them on. That's right people, the rookie mistake of trying to put your ski on when the binding is locked. I must have looked like an idiot to the Aussie that pointed out my binding to me. Slightly embarrassed, I half skiied half walked and stumbled back to the bottom of the mountain (fortunately I had not travelled very far by Whistler standards). There are two things I think about now in hindsight: the first being I probably should have started on the bunny hill; the second is how I would love to cruise down that blue run on my skis now (the at the time dauntingly steep blue run that now looks like a beautiful wide, perfectly groomed speed run in my head).

For the remainder of the morning I relegated myself to the bunny hill. Over and over again I would pick myself up after falling off the chair lift, prepare and with trepidation make my way down the slight incline that currently sits between a magic carpet and the Magic Chair in Whistler. Like I said, bunny hill. Around lunch time I could actually turn with a little confidence but I knew I wasn't getting anywhere fast and I needed help. I went to the Ski School booth only to find they were fully booked for the day. Well that idea was short lived.

I didn't stop for lunch that day, and by the time I was becoming so sore from all the falling. There was good news though, I'm almost certain I stuck a couple of exits off the chair lift. It was almost time to go back home, but I had barely been on the mountain. I could try another green run by now right?

And so with that thought in my head I took another chair lift (the right chair lift this time) up the mountain. A couple of non-selfie (it wasn't a thing back then) happy snaps later I VERY slowly made my way back to the bottom of the mountain where I could hand back the skis to the rental shop with great relief. I may have fallen once or twice (I can't remember), but I know I successfully navigated the sometimes quite narrow green run to the bottom and on that happy note I was done for the day. So SORE! 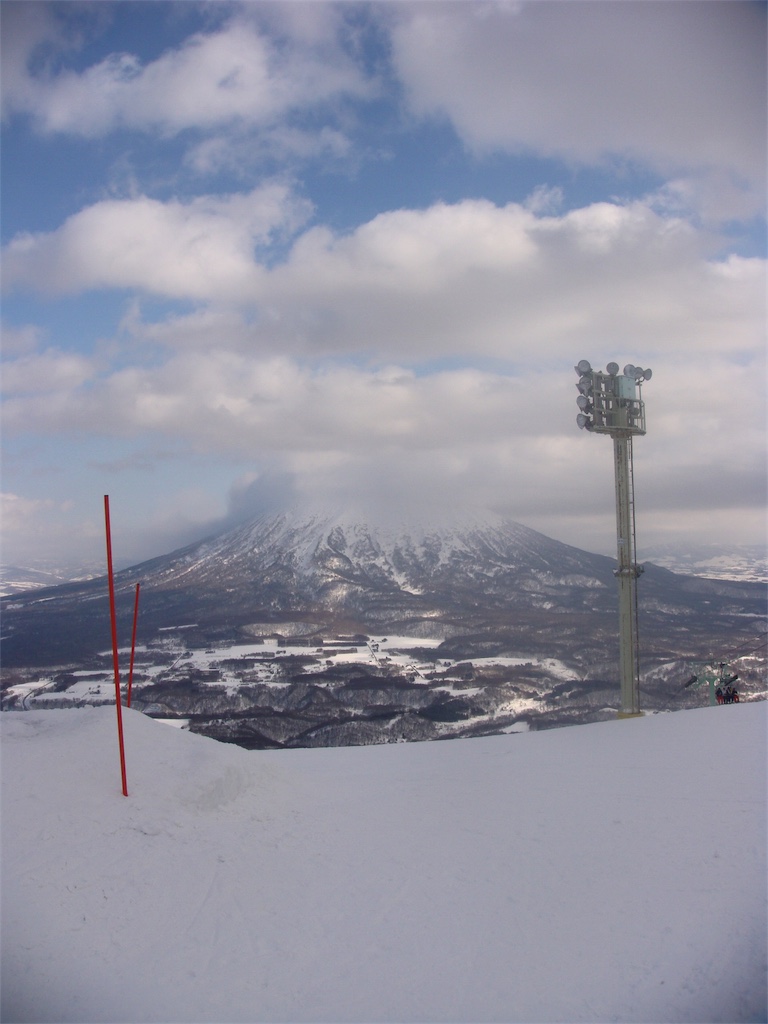 Perhaps if I had have planned that better, lesson and all, I may never have switched to snowboarding the next time I saw snow. Perhaps I would have learnt to ski in Whistler before I snowboarded. I wonder what that would have been like? I know for sure I wouldn't, or couldn't have fallen as many times as that first time on Easy Out on skis right?

Now all I'm thinking about is how much I want to go back to Hokkaido to ski (and board) another round.

And on that note I will leave you with the strangest KitKat variation I have ever seen (seen in Sapporo at the train station the evening I returned from skiing).

I kid you not.

Got to love that place.

Powder and Ice - Part One