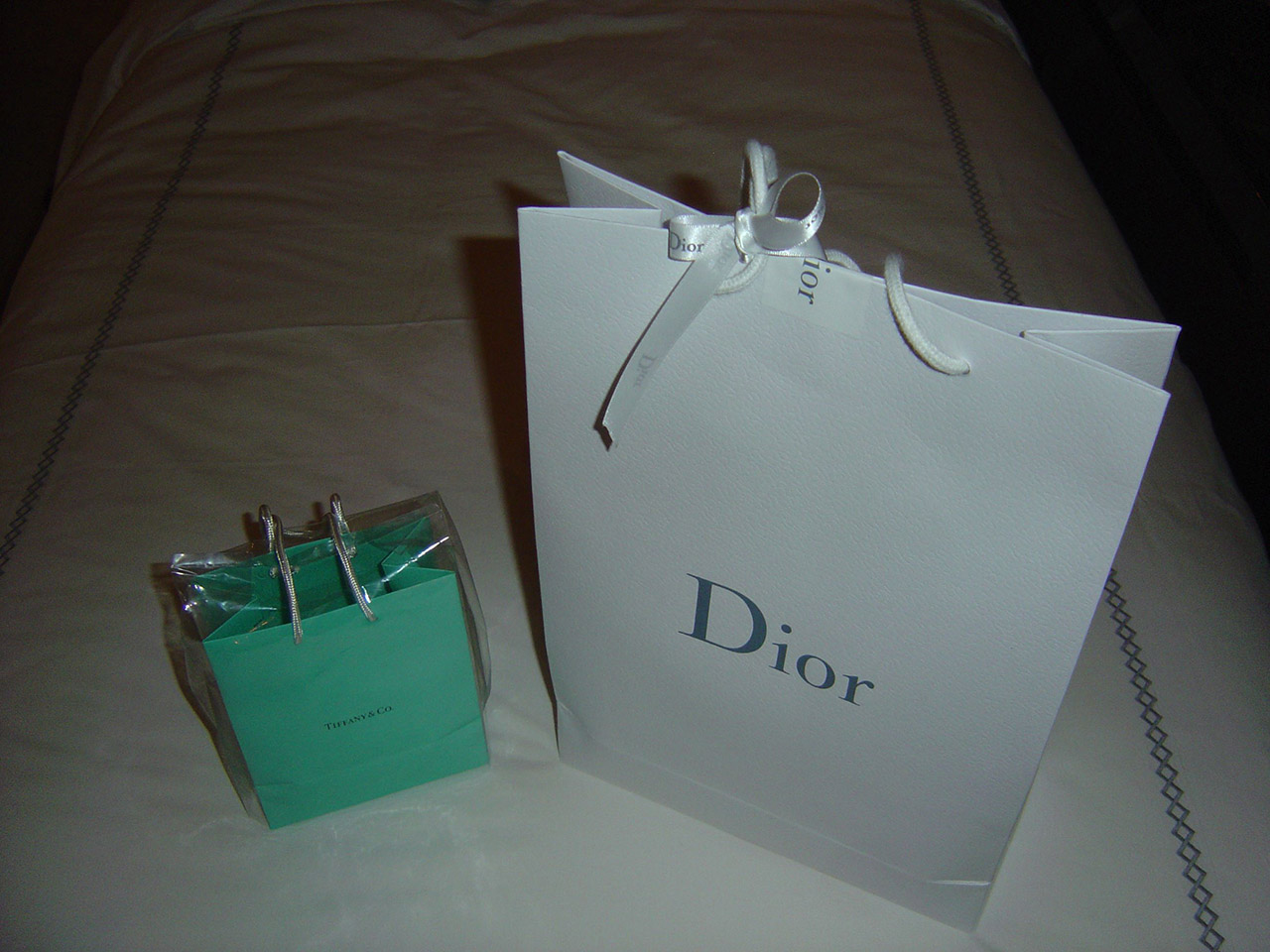 Now before I begin this is a shopping day to challenge even the insane Shibuya day spent with Jonno.

Time Spent Shopping = 8 hours
Number of Prada stores = 3
Number of Tiffany stores = 2 (tried to get into the third but they were closed)
Amount Spent = ... enough

Normally I don't spend too much time in all the 'designer' stores, but for the special ocassion of Hong Kong, I made an exception. Now I was certainly not dressed for this kind of shopping, my cargos and a cheap t-shirt I bought in Shanghai and my joggers. But after a couple of stores, I didn't care about what I was wearing.

What better way to start a shopping day then to go into Tiffany's. There was two purchases made there and both Mum and my bag (due to the rain) had it's own little raincoat to protect the bag. It was so cute. I wished they had given me the charm and the box seperately, because I don't won't to open it, it's so adoreable!

Prada, Bally, Loewe, Hermes, Vuitton, Gucci, Dior, Fendi, Chanel, Coach, Versace, Marc Jacobs my eyes were swimming and then you go into the next shopping mall and you see the same shops all over again! Insert scream of glee here. Shopping in Hong Kong is so much fun because most buildings are linked with overhead walkways and almost all office blocks have some kind of shopping below. There was no need to walk out in the pouring rain, at all! You walk out of one centre and soon enough your starting from the beginning again!

I was so indecisive, I was a kid stuck in a candy store and everywhere I looked there was something I liked. The one good thing about there being more than one of every store is you left one store and it wasn't too long before you got to look at something that caught your eye again. It made the decision making just a little easier, but it was still really hard.

In between shopping malls, Mum thought it was important to stop and do some siteseeing, so we stopped, on an undercover walkway, looked at the city to our right... for all of 5 seconds and kept walking. Shop, shop, shop, shop.

Finally after starting at 11am, around 3pm there was only one item in my mind.... A little Dior bag that the more I saw, the more I fell in love with. It was a little painful handing over my credit card, but it's my special treat for the trip. I must admit, until today, me and Dior never meshed, I never thought it would be my first choice, but this bag.... is exceptional.

A little later in the afternoon after tossing up between Gucci and Prada, Mum finally made up her mind and purchased the Prada bag. This devine white leather bag, quite a lot bigger than mine (I hope to borrow it sometime) :)

With many bags in tow (most of them Mum's) we decided not to go back to the room before dinner. We found this really nice restaurant, Harlens in the IFC Mall (attached to the Hotel) and once again the thought in my head was, 'I am so under dressed for this restaurant'. I had a great pizza and went back to the room to unpack all my goodies.

PS. This picture does not contain all the shopping of the day :)

Clearly Not a Lucky Day