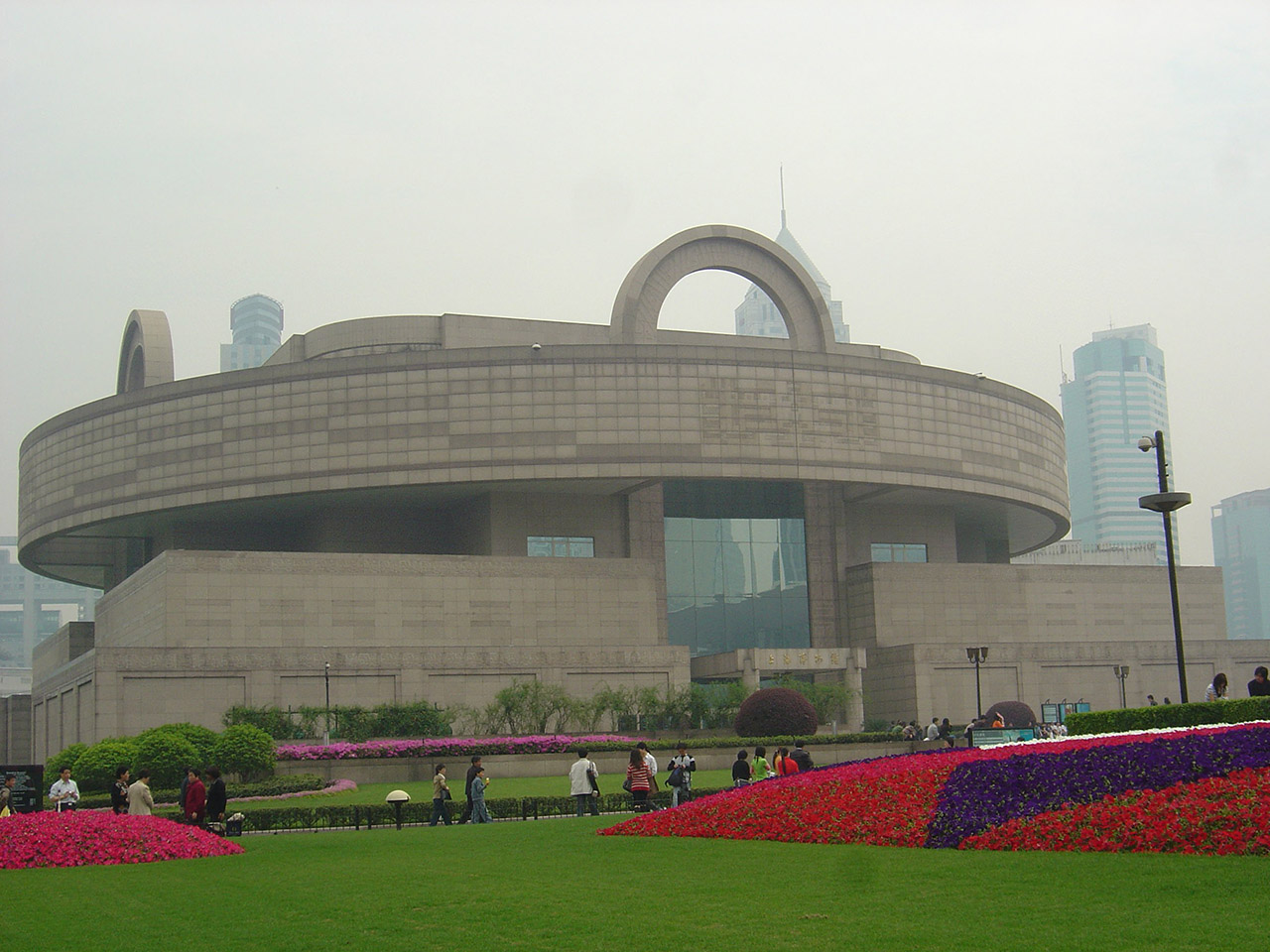 Our first day in Shanghai begun with a nice long sleep in, not having to catch a plane or go anywhere in particular is great. I eventually forced myself out of bed, stumbled into my clothes and out the door at about 1030. We decided to walk down to the Shanghai Museum which is at People's Park. Now, if we had have taken the Nanjing street we would have been surrounded by people trying to sell us stuff, but we took the other road which was far less eventful (sometimes this is ok). Walking along we started to have an appreciation for the architecture and how new everything is in Shanghai. All new buildings have great design elements, especially on the top. Most buildings, including apartment buildings have detailing on the top. The only question that came to mind is should I be looking at the street or the tops of the buildings when walking?

The museum itself is quite new (like most things worth seeing in Shanghai) and has a rather spectacular staircase going up it's four floors. A neat feature was in the painting and calligraphy exhibitions where you walked up to the glass and the lights became brighter, conversely, walk away and they dimmed (that's one way to save on electricity). We were easily looking back at history spanning 2100 years, all in next to perfect condition. Like all the coins from the states before China was united (early BC) and Bronze works dating back to around 160BC. I'll say it once and say it again, it's a history we just can't touch and you can't help but be fascinated by it all.

Next we went in search of food, because I skipped the whole breakfast thing. Dying for a Maccas, the best I could find was KFC and I was bitterly disappointed but so hungry I took what I could get. After eventually figuring out the easiest way to order, I thought everything was fine, but no, they didn't have any Pepsi or 7up, only Orange Juice and Ice Tea... grrrr. The chicken burger was not thrilling at all and the fries were only so so, but it filled the void. Now to go in search of a drink.

We took a stroll in Xintiandi, an area with restaurants, boutiques and bars. Very new and all built in done up old style buildings. But everywhere we looked it was a sit down lunch and the few places that weren't only served coffee and ice cream. I needed Sprite! When we walked out of the Xintiandi area we found a convenient store where I bought a can of Sprite for.... about 38 cents... cold. Impressed with my bargin and my thirst quenched I was ready to take on the world.

Nearby was the Antique Markets, but as we were walking along we saw a site that you don't see very often, clothes drying on the streets. You might not think much of this now, but these clothes were hanging between street signs and traffic lights on the park side of the street (the clothes were most likely from across the road) but everything from underwear to fake (I'm assuming) Versace pants. Try that in Sydney or Melbourne and see what happens :) We wandered around the antiques market and finally made it out without too much damage to the pockets (Dad exercised his bargining skills yet again, this time he was more successful).

Huaihai road is another shopping strip in Shanghai and since it lead back to the Hotel.. why not? Not as many people as the day before but still enough to require some brain power to dodge, duck and weave through the oncoming masses.

Safely back at the Hotel we left plenty of time to catch a taxi to the restaurant (after our experience last night) but that was not a problem, we just jumped straight into the cab and ended up at the restaurant 25 mins before our booking. Now this restaurant, Kaarin's suggestion (1221) a favourite amoung expats is in the back corner of a building. It's neon sign (1221, The Dining Room, that really looked like.... 1221, The Dumb Room) was the only indication from the street that this place existed. Inside there were Americans to the left, Americans to the right but for a good meal, this can be forgiven. They serve tea by pouring hot water from a metre long spout (a very good reason to have tea) and the food just kept coming. Soon I was so full Mum was asking me to try some of the dish she chose and I just had to decline perfectly fried chicken (bet it would have been 10 times better than the KFC for lunch).

Soon we were back at the Hotel having an evening drink on the 37 floor, the visibility was not that great but they serve chips as a bar snack, even though I was stuffed from dinner, I just picked at the chips for the entire time we were up in the bar.

And I forgot the mention.... Four Seasons bed..... Definitely not a stone slab. My back rejoices!

Caught on a Technicality