Other possible titles for this blog:

To avoid spending another day in the dysfunctional chaos it was necessary to investigate modes of non-ground transportation. Wouldn't it be nice if the Hotel had a dock on its patio where you could hire a water taxi to shoot you down the Bosphorus to the old city? Oh wait, that's exactly what the Hotel has! 25 - 1 hour drive turned 15 - 20 minutes by boat. Why did we not jetset through the tankers, cruise liners and ferries yesterday?

Bizarre Bazaar was the title I had always suspected I would use when I finally reached the Grand Bazaar however there was very little Bizarre and a bit more of the ordinary. Yes, the building is very old and large but the shops were typical of those on the Istanbul streets and other corners of the globe. Fake handbags, leather goods, jewelery, clothing, only after that were some more traditional Turkish stores of carpets, ceramics and Turkish Delight. For the most part it was organised and finding ones way around only required a reasonable sense of direction.

I have also become highly adept at ignoring the many peddlers trying to engage you in conversation. Most are friendly enough and take the uninterested shake of my head as a sign to walk away. We've only encountered a couple that are more pushy, that will follow you a little ways down the street or try to sell you something when you are standing still figuring out what to do next. I admit I did expect the city to be more pushy from what I've heard but to me that is not the case at all. Shake your head, keep walking... I've got the hang of this.

I think the boys became bored of the Bazaar very quickly. Mum and I did some light shopping but most was done in fixed price stores where bargining was not necessary, the only other time was when something was so cheap (like $2) Dad gave the man his money without haggling. After tiring out the bazaar we found we had an abundance of time before the ferry back to the Hotel at 4pm.

Cats rule this city. They wander around the city or down by the waterfront like they own the place, whereas the dogs just want to find shade and lie down. Our guess is that they aren't strays as almost all look clean and well fed, not that I'm going to intentionally touch one, just saying.

Why did I wait so long to try Turkish Tea? I thought to myself as we sat in the bar at FS Sultanahmet having some snacks and drinking tea. I could have been drinking this deliciousness for the last 5 days!

And speaking of deliciousness: for dinner we decided to go round two at a kabab restaurant, different restaurant from last night but same type of food... Meat, meat and more meat. Got to love this style of cooking. 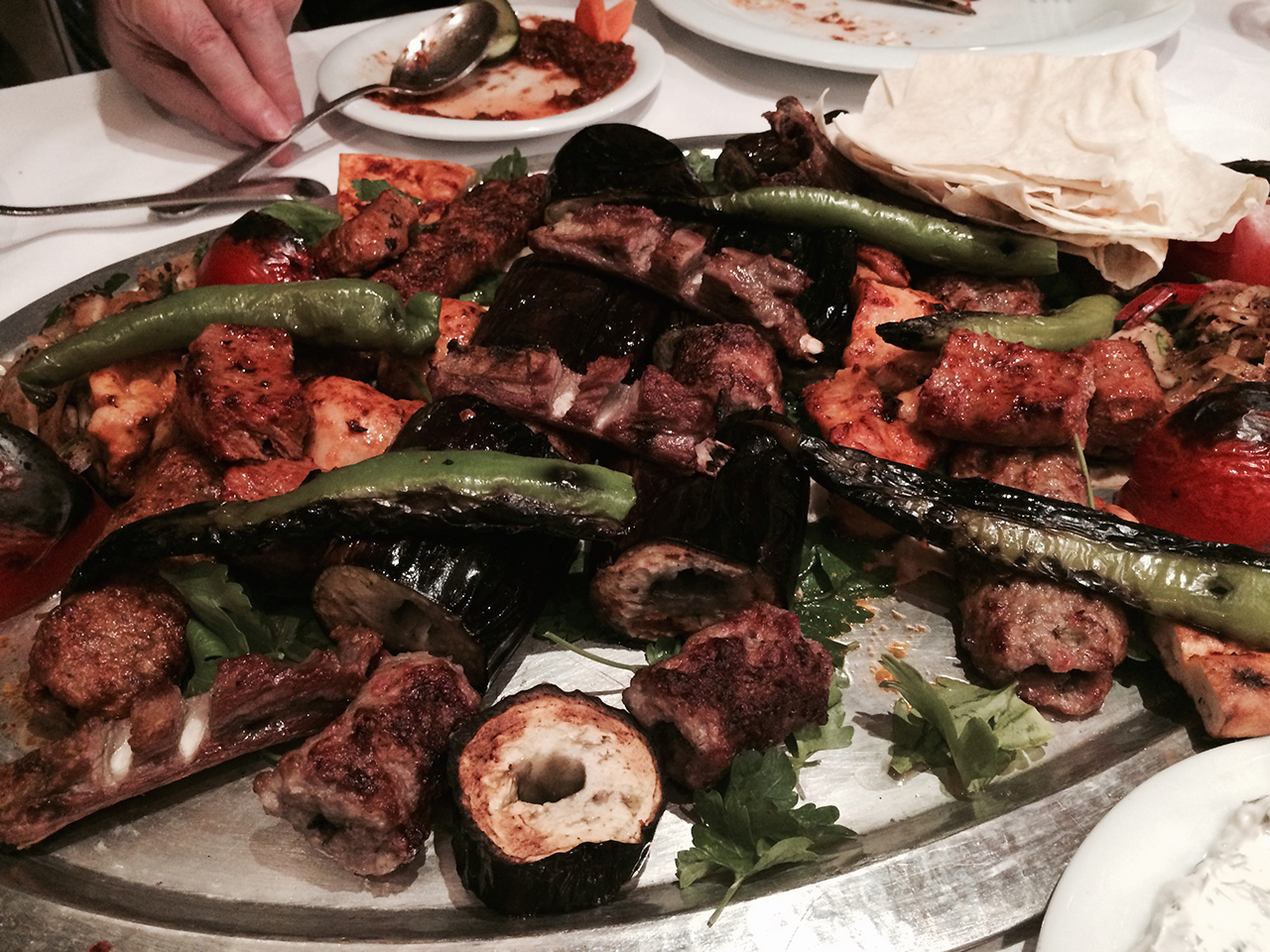 During dinner it was clear that there was a severe shortage of bread for the appetisers. We waited patiently for our bread to be replenished and when it finally did Jonno decided to corner the market on bread, hoarding 5 small pieces just before our meat platter arrived. We discussed at length the economics of bread in the restaurant, the exchange of meat for bread with other tables (not that we could finish all our meat), and the soon to be over-supply of bread when the kitchen finally met production levels. Just as we were about to leave the table next to us received their bread, a tennis racquet sized steaming hot flat bread. Suddenly the bottom fell out from underneath us and the bread market was dead.

Chillin' on the Bosphorus