So we took the long road around to Assisi, entered from the other side of town, got into the parking station at Centro only to find it full but then magically the man points us into a disabled parking spot… SCORES! SPACE!

We headed straight for the Basilica of St Francis of Assisi. Shame that there were no cameras allowed inside because the Frescoes were beautiful and almost every panel, ceiling and wall was decorated in some form with paint. There was a packed service at one of the smaller alters, the mumbling of pray and hosannah rang throughout the church, so did the loud speaker… “Sliencio” when the tourists were getting too loud (and let me tell you that happened often).

St Francis’ tomb is underneath the main alter, we walked down the stairs to see it. There was a line of people making their way downstairs and in front of me was possibly the cutest little girl ever, all of about 1 year old looking over her mother's shoulder at me. She pointed her pinky finger at me and I did the same, think of it like the God and Adam fresco in the Sistine Chapel. When our pinkies touched the smile that lit up her face behind her dummy... well cutest thing ever. The whole time her Mum and Dad had no idea this was happening. We played a little more before her Mum gives her a candle to play with and from that point on I was the discarded toy, but SO CUTE. Later we would see them again at the water fountain, the little girl having so much fun until Daddy wanted to leave, then she began to cry, but we took a picture of her enjoying herself before that point. She’s totally the star of my blog today =) 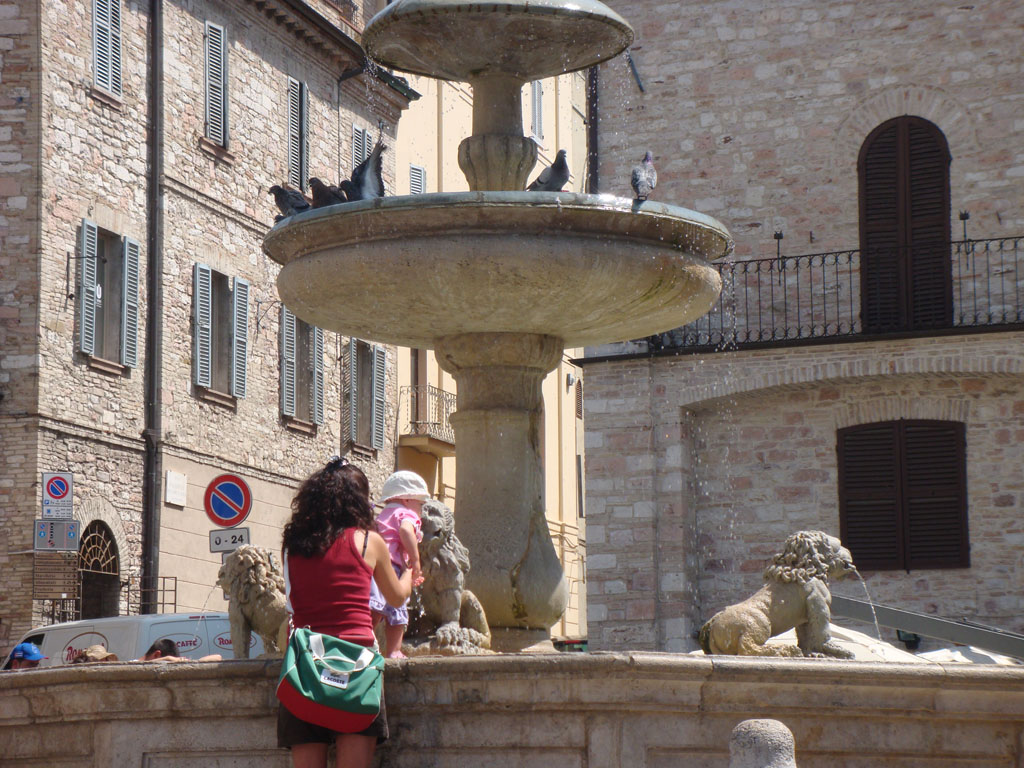 It is a very spiritual Basilica and no matter which way you looked people were in deep prayer. You can see the tomb before you and you think that that has been lying there since something like the 13th century, you can’t help but be drawn in.

After the Basilica and more gold in the Museum we headed to the streets, up to the main square. There were quaint shops all along but a jammed pack place full of ceramics caught our eye. Mum and I have said we have bought enough now… I don’t know if that will stop us. Oh and the pastry shops have amazing window displays, makes you want to lick the windows.

We left Assisi and the thousands of tourists at about 145pm, realising the other church we wanted to see was closed between 130 and 3pm). We then took the recommendation of the Manager at our Hotel and headed for another Medieval town called Spello. Very quaint, less tourists and all uphill from the parking lot. We walked the entire town up and back with a stop for our traditional early afternoon Gelato.

Back to the Hotel and within about 10mins I was down at the pool soaking in the sun again. We stayed for a few hours before heading out for dinner. We had seen this funky looking restaurant about 2 mins walk from the Hotel, Dad scouted and came back saying yes, should be fine, I booked, I couldn’t read the menu though, but it looked like pasta and pizza. Well he was right there was pasta, no pizza though and the menu was entirely in Italian and not your in your usual I-might-be-able-to-work-this-out way. Thankfully the service was relaxed which gave us plenty of time. We successfully negotiated main and dessert but waited almost 25 minutes from the time we asked for the check to when Dad finally paid for it at the counter… Italians do not rush you out the door that’s for sure, but it does drive me nuts. I'd rather be blogging than tapping my fingers on a table waiting for the check.

There must be a festival happening in Torgiano at the moment we walk out of the restaurant. Besides the fact that its 10pm, it was the first time we had seen all the shops opened. There was a play happening in one of the small piazza’s and live music with an open eating area of benches and a carousel in the main area. It had sprung alive during dinner time. It must have had a huge influx of people from the other townships in the area. A cool way to finish off the night.

Under the Tuscan Sun

My House in Umbria