Some people don't get Dubai, like the customs lady at Vancouver airport allowing me on my flight to Seattle. "Dubai? For Vacation?" she said with a look that was clear she will never travel to Dubai in her lifetime. Then I explained it was a stopover and I was going to Turkey and Jordan. Once again she repeated my destinations as though she must have heard incorrectly. I get it, people like that don't get Dubai or the other destinations I am sure to be facinated by. In the case of Dubai, people like the customs lady just don't understand how much of a cultural melting pot it is, where a shopping centre has brands from every possible corner of the globe.

Dubai Mall. After my failed attempt two and a half years ago to make it through the entire centre in a day there was a need to start early. So an hour after landing I was already shopping.

However, over the course of the next day and a bit I didn't do half as much shopping as I expected. Yes, I did shop until closing (10pm) on that first night but when I woke up at 530am the following day another thought had taken over... I want to go to Aquaventure out at Atlantis at the Palm.

There is a certain pain that comes with waking up early due to jetlag. It's knowing there are hours between where you are and what you want to do. Mine was about four hours which I filled with swimming, breakfast and trying to sleep again.

The Palm, the man-made island in the shape of a palm tree. Every wacky dream in the world turns into reality in Dubai. Anyway, I was surprised by all the buildings down the middle road being about 12 storeys tall. The smaller houses were out on the 'leaves' of the Palm. At the very top of the Palm is the massive Atlantis Hotel and that was where I was heading... Aquaventure, the direct competitor of Wild Wadi Waterpark.

Hit at opening time, barely a person in sight in the queues only to find the way down without an inflatable tube is this... 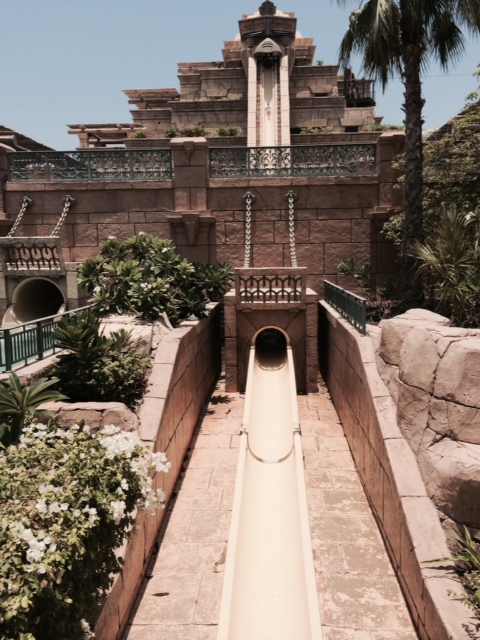 Now I’m all one for the crazy water slides where you prepare yourself like a dead person at the top but as a first ride I was lacking the extra bravery a few layers of water can give you. Oh and this particular ride goes through an enclosed tube in the shark tank, wonderful. But in the end it was only a few extra seconds of hestiation and a "Let's do this," to the lifeguard as I pushed off from the top. Rise and repeat.

Note: Way too fast to see sharks through the water splashing around the tube so the novelty they sell the ride on isn't really a novelty at all.

After that the rest of the rides on Neptune tower seemed tame, including one that went through the shark tank at a leisurely pace so you could actually see them, so off to Poseidon tower I went, this time starting from the tamest and working my way up to the craziness. The craziness being Poseidon's Revenge that drops the bottom from under your feet into a barely there incline at around 60km/hr before twisting and turning all the way to the bottom. I am sure that particularly nasty ride is the reason why I have a bruise the size of half my palm on the back of my leg. How I accomplished such an amazing bruise I do not know, did I mention 60km/hr? I didn’t need to do Poseidon’s Revenge again, but I did go round 2 on a fun oversized rubber tube that seats six that goes into a drop to a gravity induced u-turn, that was fun, just not as fun as the Leap of Faith, so I went back for one last try.

As the temperature gage increased into the 40’s so did the queues of people. I had been lucky not to find many on my adventures so far but that was because they were now all queuing for the Leap of Faith. A mass of british tourists from the boys with their rather girly tattoos to the girls who should rethink their choice of bikini. A half an hour later at the bottom of Leap of Faith with a snowcone in hand I was done with Aquaventure.

Convenience is a Hotel attached to one of the best shopping centres in the world. Throw a load of washing in the machine and go shopping until it is done. Only problem with that was when I finally came back to the room the jet lag finally hit and I had to crawl into bed for a couple of hours before reliving that brilliant Lebanese meal that I had nearly two and a half years ago. The food, as delicious as it was, defeated me yet again. And that took me until 9pm and the last thing on my must do this trip list of Dubai. 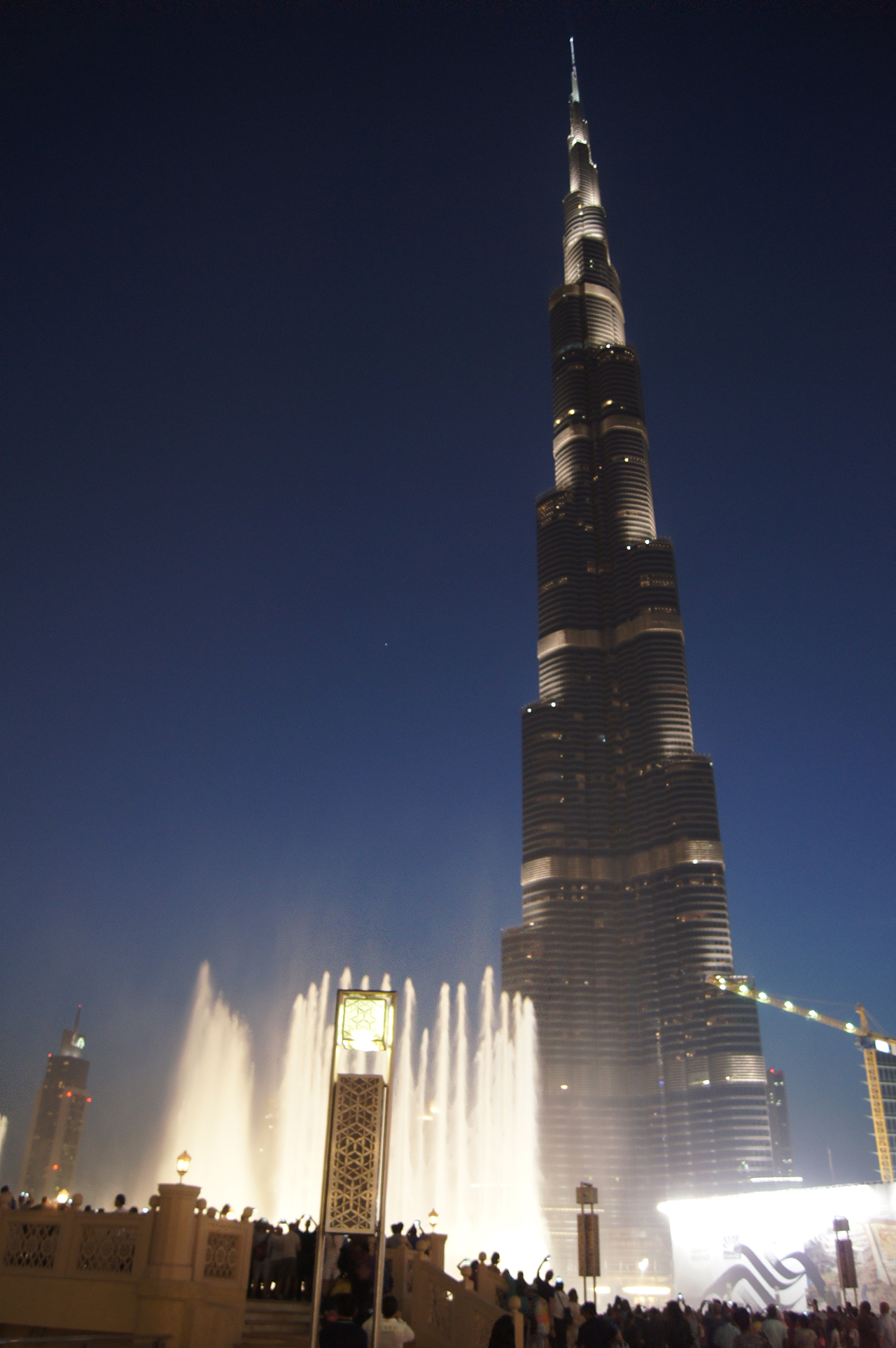 Night-time Burj Kalifa. I don’t think I’ve ever ogled a building more than this one. From its colourless form on the horizon to standing underneath it and everywhere in between it is a building meant to hold your attention. 124 floors up and not even close to the top is the observation deck. Photo opportunities at ground level may have been hindered by this seemingly ever persistent haze, but the view from the top was still spectacular, especially when the water fountain below is coordinated to Michael Jackson's Thriller. 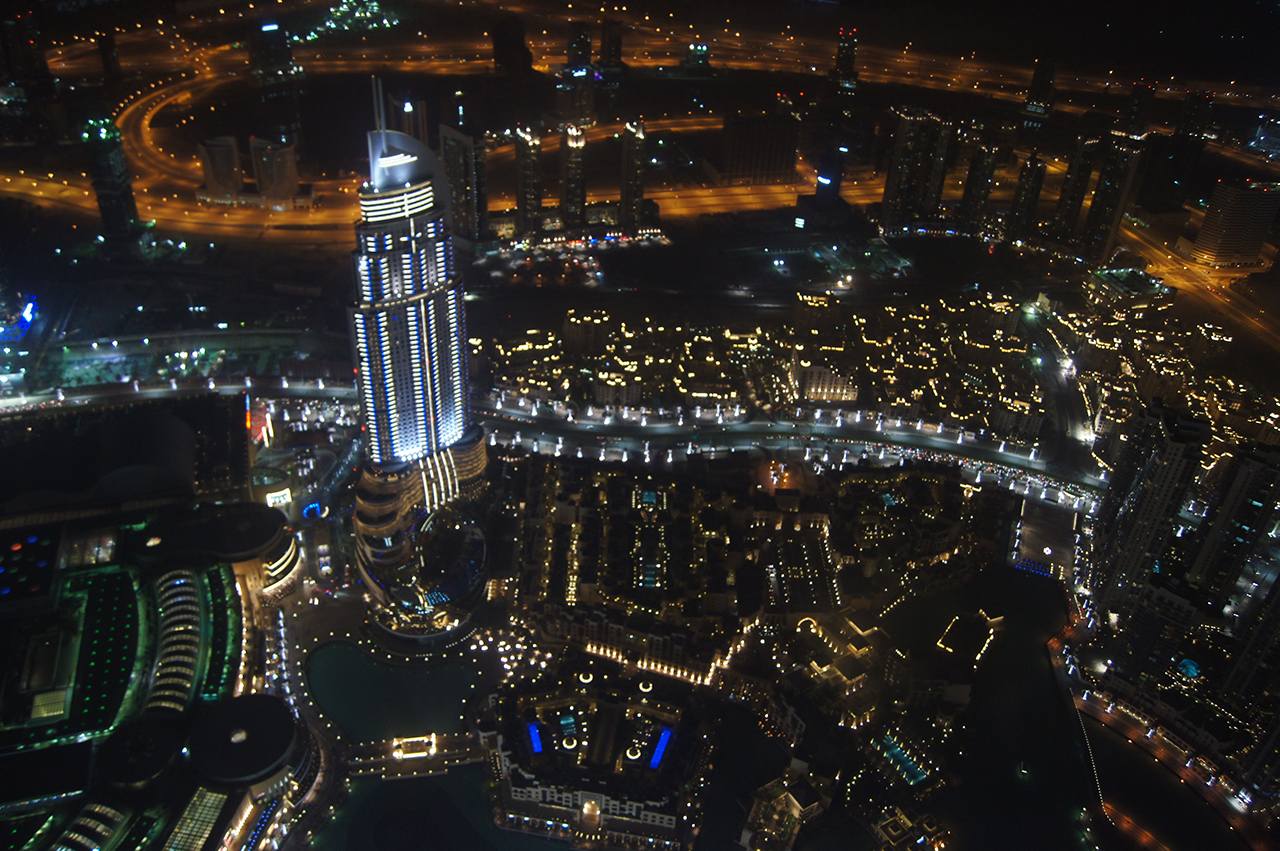 And that my friends is how to successfully embrace the craziness of Dubai in a day. That plus the following side adventures: