I had to break that day in two otherwise it would be yet another epic blog without pictures and the hope of an ending as you scroll down the page.

So we left the excitable girls primping and comparing their dolls and headed out into the pouring rain and here I am thinking the game is going to be cancelled. I've been looking forward to seeing a baseball game at Wrigley Field for months now and I'm going to miss out. Back to the Hotel and another attempt to enter the forbidden residences (fortunately the doorman was much less snooty than the lady earlier). Another crisis averted and a quick break in the room we were back out in the sun. Yes people, I said SUN. It had gone from thunderstorms to scattered clouds in the space of about half an hour. Could we be so lucky?

The answer is yes, yes we were.

and literally all the action happened at the bottom of the fifth with a Home Run (glad I got to see one of those), a lost ball in the hedges and the only drops of rain we saw came from the second elevation (that we were under the ledge of) and had a nasty habit of dropping right down into what little cleavage I actually have.

Our seats were awesome (thanks Dad!) basically in line with the foul line on the left of home plate. Did that mean we were in foul territory? Only from the right handers (and there are a lot of leftys... quite disproportionate actually) But we still got a lot of action. A couple were within a handfull of rows and seats. Others were almost directly above our heads in the upper grandstands. We saw fumbles, catches, balls hitting knees and dropping to the ground to be scavenged up. There might not have been much action on the field but they kept us guessing where the next foul was going to end up. Seriously one cub player hit four foul balls into the stands in one turn to bat.

Somewhere during the Cardinals turn to bat (because they weren't really hitting anything) we went to the shop and then followed our noses to the Hot Dog stand where I filled up on a Dog with Onions, Mustard and Relish. No tomato sauce on this Dog people! Soon after that the game was finished, everyone was packing up to leave and after a few I WAS HERE photos we headed out for a walk around the field.

The guy outside the pub summed it up, "The sun is out, we beat Cardinals two days in a row, why wouldn't you come inside for a beer?" Well we didn't but we loved the atmosphere outside the field almost as much as inside. Wrigley is smack bang in the middle of a residential area. So much so that the apartments across the road have grandstands on top. Do I have a photo of that handy? You might be lucky here... 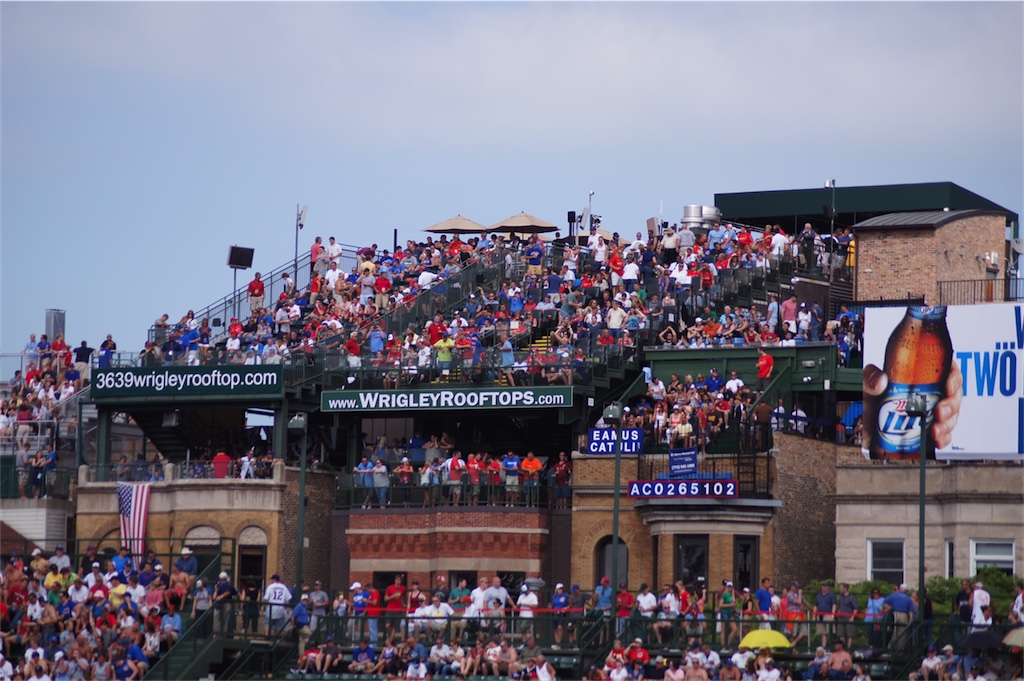 I could not imagine seeing Wrigley Field without going to a game here. It will put a smile on my face for a long time to come. Back to the Hotel by train and out the door again shortly after for dinner at the Cheesecake Factory which is an adventure in itself. We waited 35 mins for a table after them telling us it would be an hour and us showing them a Four Seasons business card. But just to watch what's happening in there is worth the wait.

So you have been given a pager to wait out your 35 mins or so then you are taken inside where you wait for one of the hosts (there are many) to take you to your seat with the menus. This place is like clockwork. The passing parade of customers, waiters with/without food. There are 100's of items on the menu and Mum forgot her glasses, fortunately I didn't have to read the whole thing to her because we both knew we were in a burger mood. Smokey BBQ Burger later (thumbs up) and a little bit of rain (lucky we weren't seated outside) we ran down to the Lake Shore Road to view the Navy Pier Fireworks. It was a crazy day but at least the sleep was better than the night before.

It's a Doll People - The American Girl Phenomenon