The good news is I got to see the Daytona 500 race track, from the plane. The bad news was a storm had settled on Orlando and whilst my parents made it safely to the ground no more than 20 minutes before me, I was stuck on a plane with a bunch of Disney crazed kiddies waiting for the storm to pass in Daytona Beach.

They put on Cinderella to pacify the little ones and me but sadly the audio in my seat meant that I can hear the audio, with a constant beeping over the top of it. Needless to say the headphones were stowed away, because I can't imagine how listening to that constant sound was going to make this situation any better.

The crew were great at bringing water around (which is amazing) however I'm remembering my breakfast some 10 hours ago and water just ain't going to cut it.

Finally after a two hour delay and a kiddy car seat jammed in the baggage claim (+20 minutes) I was watching the most spectacular sunset, from the car. Curses! A missed photography opportunity.

So imagine if you will: Me, up since 130am Pacific time, two flights later, two hour delay and a complete lack of food at 845pm Eastern time saying screw makeup lets just get a dress on and find food and a drink, I don't care about anything else right now.

I did find it a bit strange that Dad said their friends were in the Capa bar and when we walked in they were nowhere to be seen but reread two paragraphs above for the reason I was choose to ignore this oddity. So here I am sitting at the table with Mum, ready to pounce on a waiter for a drink when the Hostess from the front of the restaurant comes up to me and gives me a glass of champagne and a set of instructions.

Well I wasn't one to argue with the that and shortly after taking a sip I was given a small plush toy Mickey and an envelope (+1 Tsum Tsum). I was very confused. The Mickey was a Tsum Tsum, a game that my best friend and I play. I was seriously racking my brain, who would know to give me such a specific gift besides Jonno, or maybe it was just coincidence? I opened the envelope. 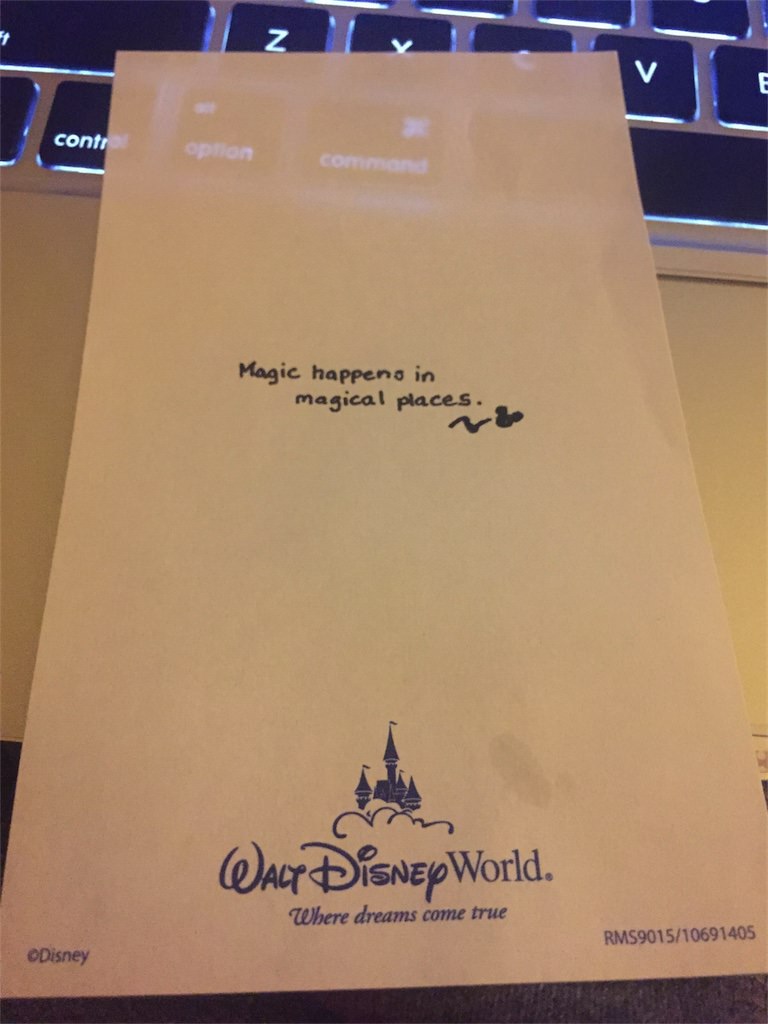 Still confused, it kind of looked like my best friend's writing but no, I'm thinking crazy thoughts. There are other people with similar writing, maybe it was my friend Melissa, how would she...

I exclaimed in mid thought for the person that walked around the corner was not my parents friend at all. It was my friend, my best friend and he had thoroughly succeeded in surprising me for my Disney/birthday celebrations.

My best friend was here, in Orlando. Here, right now with his cousin to celebrate my birthday. Was he really here? I kept poking and pinching his arm to make sure. We were so distracted by the reunion and the conspiracy that we didn't manage to order in time for our food to make it out before the 10pm fireworks. Did I mention the Capa restaurant has a view of the Magic Kingdom fireworks?

The remainder of the evening was filled with delicious Pork Belly and Steak, some bubbly, a bottle of wine and the unraveling of the conspiracy. This had been going on for weeks behind my back, parents organising with Jonno, planning the ultimate surprise. Well played. I had no clue this was all happening and the thought of 4 days of Disney and Harry Potter World with my parents, my best friend and his cousin had me giddy like a little school girl. Whatever plans I had made hit fever mode. This was going to be BRILLIANT!

The Intense Scrutinisation of a Single Traveller