It was an egg day. I knew that 2 hours before we managed to get down to breakfast. But an 8am breakfast meant we had the entire morning ahead of us, and no shops opened until 12. What to do? Jonno stayed in the room to get a few things done so I decided to take a walk through Hyde Park, through as in end to end with a few detours (like down to the Royal Albert Hall). I shared the walking paths with a running race (didn’t look like a marathon but was at least a couple of laps around the Serpentine), horses, tourists, more runners and dogs. There was a father running with his three young daugthers, one which wanted to do four laps (she had done 3 already) and later I saw them running again. “Pick up the pace girls, we have really slowed.” Wow, driven.

Oh and then there was this randomness... made me laugh =) 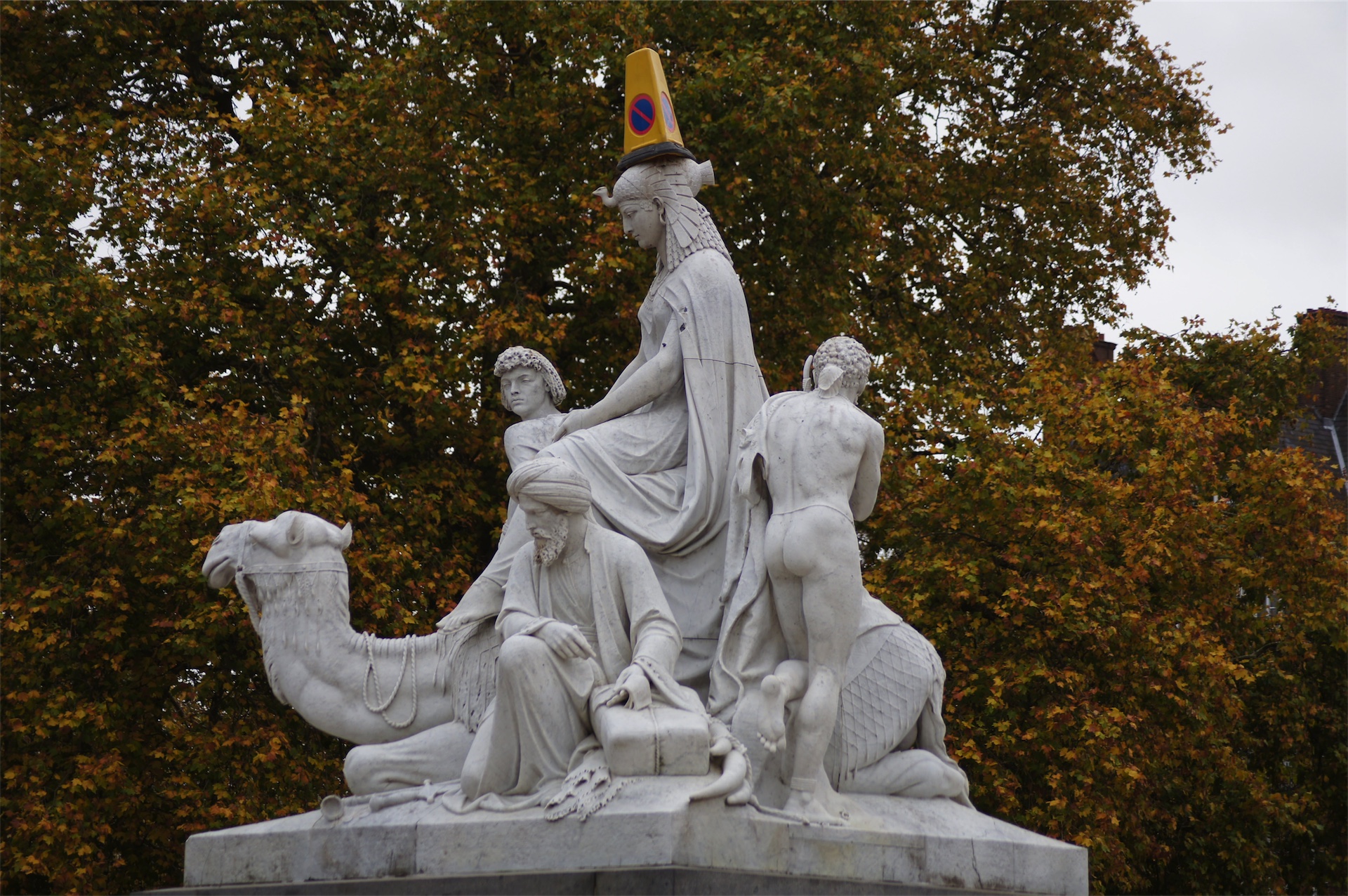 I ended my park walk at Kensington Palace which is currently undergoing some pretty major renovations (as is a lot of other things in London). Walked out onto a closed street which Dan told me later was the most expensive in London, you can walk down it but there are guards at either end to check cars and there are signs everywhere saying no photography. Oh and two police officers carrying their semi-automatic guns outside the Israeli Embassy. And that was the first of many Embassy’s I saw whilst making my way through Kensington to Knightsbridge with a brief stopover at the V&A Museum.

The ATM for some reason offered me US dollars or Pounds… why would I want US dollars? I got caught in a sea of people waiting at 1130 for Harrods to open (I guess that extra hour to do nothing in the morning meant as soon as there was something to do people were doing it).

I made it back to the Hotel room at 12, three hours after starting my walk. I had scarce sat down for 3mins outside the V&A museum but other than that all walking. Driven, like those little girls with their trainer daddy. But my feet were gone. They needed… a bed. But about 10mins later we were back out pounding the pavement and with a quick stop at Burberry we were heading for Notting Hill. This time thankfully it was via the Tube for a bit.

Notting Hill is a funny place, you walk out the tube station and onto the main street and its not that pretty, the office buildings are drab, small chain food and coffee shops lining the streets but you look down one side street and its completely different. Beautiful and huge white houses line the streets, and that’s the way Dan took us. It seems the good side is sandwiched between the not so good side. But the good side is like a Woollahra kind of neighbourhood.

Dan promised us a Sunday roast and that is exactly what we got. Beef and Yorkshire pudding stacked on the plate thusly. 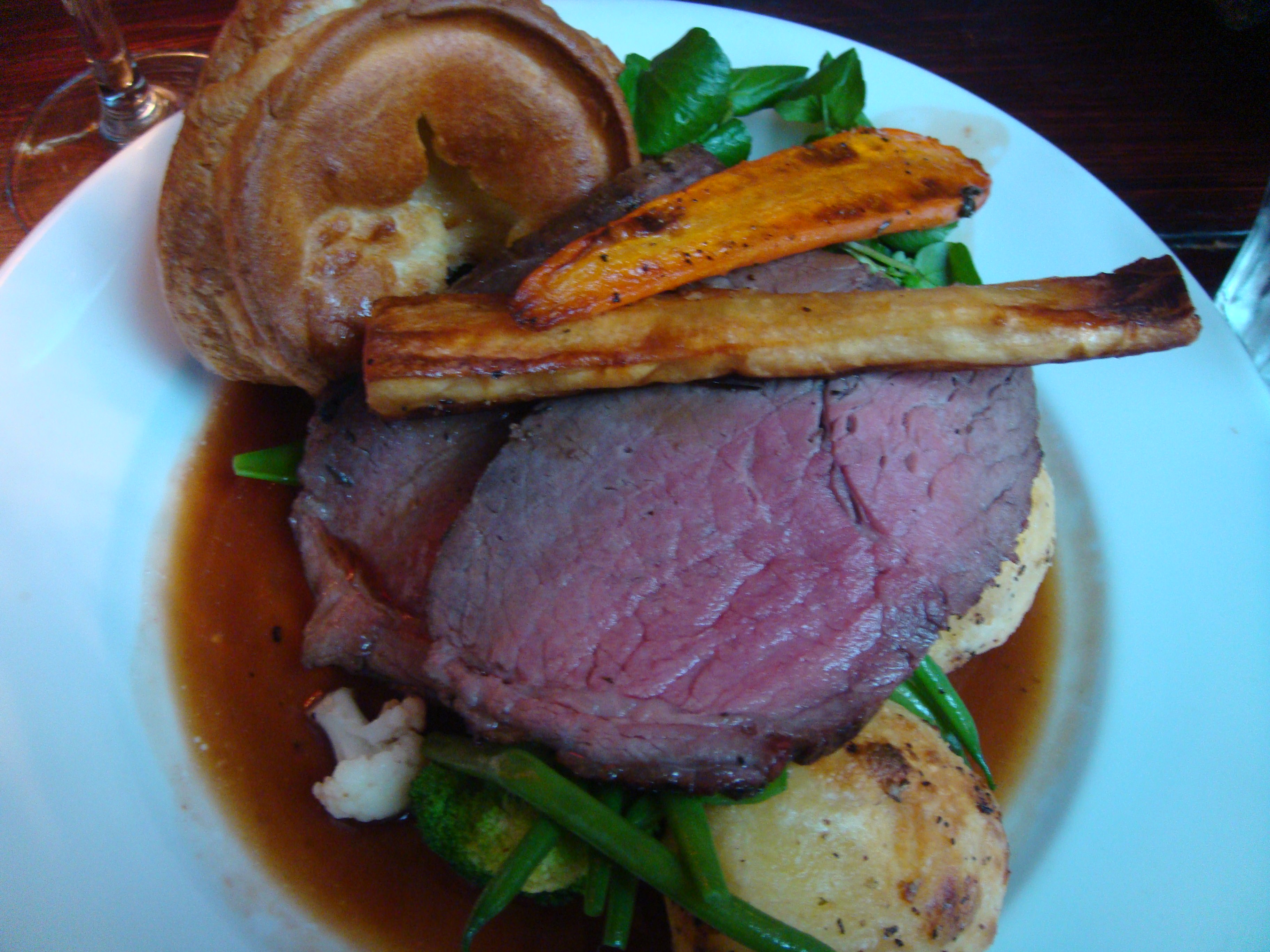 Verdict = Delicious but the Yorkshire Pudding wasn’t as good as Mum’s. Leftovers = Part of a Potato, Broccoli and some beans. The boys cleaned their plates.

So after the great food, wine and company we headed back into London for a little more shopping (mostly Jonno) until my feet wouldn’t take anymore walking. At about 6pm we ended up back in the Hotel, completely exhausted. I was stuffed, tired and had to force myself to wake up to watch Downton Abbey, but now that is done and all I want to do is sleep. I’ll throw stuff in my bag tomorrow, we are leaving the convenience of our Park Lane address to the further out Canary Wharf, but there is still much to see and do =)

A Wicked Kind of Halloween

The Touristy Thing To Do