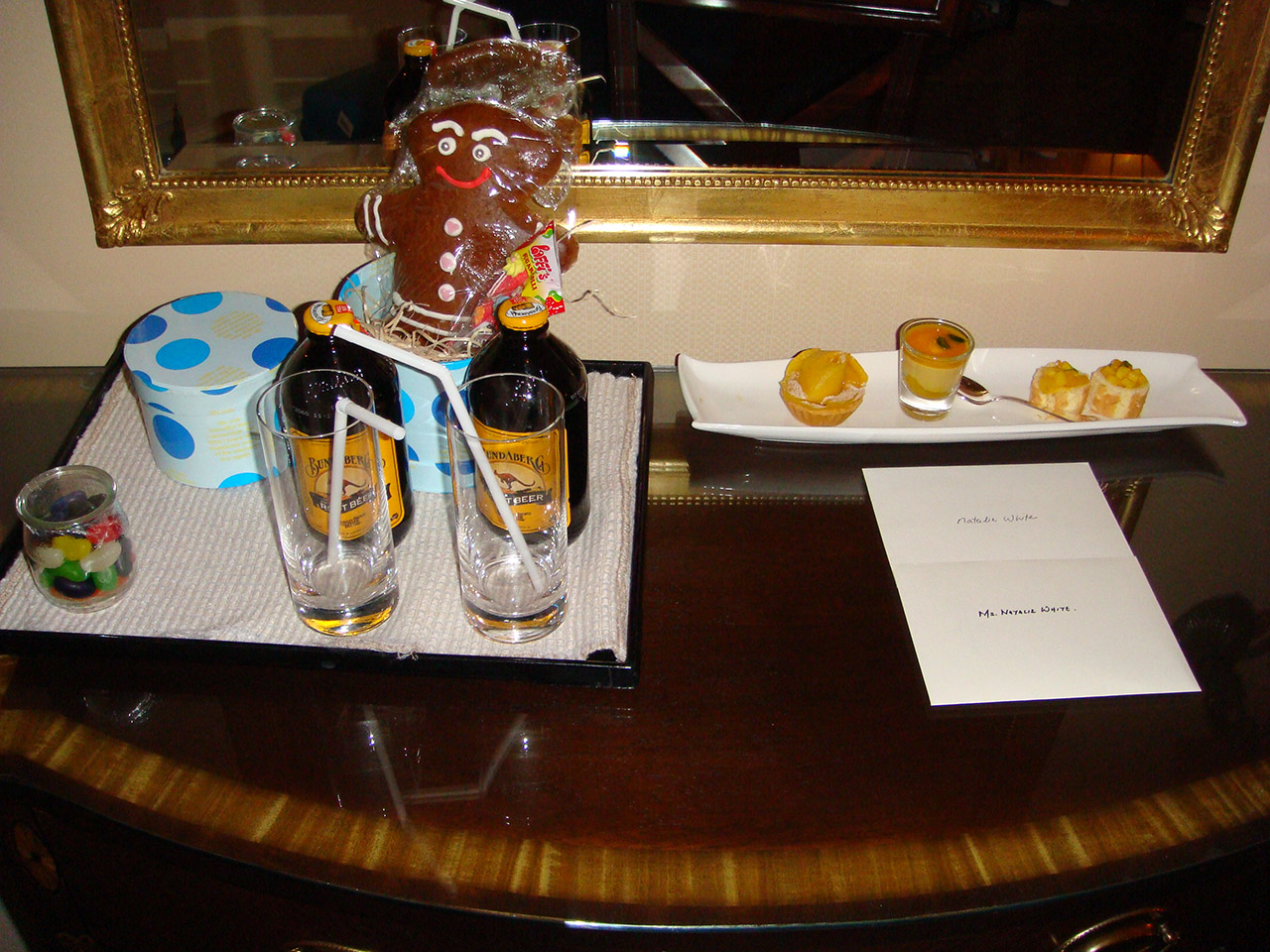 Good Morning one and all. I'm back! Only a quick adventure this time around. I'm currently sitting in my room at the Four Seasons Singapore waiting patiently for the shops to open.

The flight over was average but thanks to that plane loving boss of mine I had a spare seat next to me. All I had left to endure was 8 hours of crying babies and toddlers (there seemed to be many on this flight). I then jumped into gear as soon as we landed... There were places to go, people to meet.

I thought that I was going to be in the basement (the Hotel is pretty busy) so image my surprise when I found myself on the 16th floor in a deluxe king room. Someone had left me an awesome amenity complete with a huge gingerbread man. The amenity also came with popcorn, root beer, a lollypop and jellybeans, but Dingy (yes, I've named the giant Gingerbread Man) made me laugh. I doubt I will eat him as he is likely to become my travelling buddy for this trip. There was this mango amenity next to what was clearly meant for kids, since I assume the Area Director of Finance would not be giving me a kids amenity I can only think of one person just crazy enough to think I would love it. Thanks Sally.

I didn't spend too much time with Dingy because there were only a few moments to get over any jet lag before hitting the town with an old friend, Kuni. We went to this really quaint restaurant called Broth which serves Modern Australian. It's in an older style area of Singapore where the old houses have been converted into bars and restaurants. A little cobblestone pedestrian street with lots of plants everywhere. We sat outside and I couldn't help admire its ambiance. Instead of wearing name tags, all the waiters have names on their belt, bright and sparkling so it's really hard to miss. After sharing an entree I could barely fit in the main. It was great food and I'd like to go back one time when I feel like eating more.

Afterwards Kuni took me to a bar called Toca Me and I thought when he said that we might bump into a few people I didn't realise he would know almost half the people there. You see Toca Me is a lesbian bar and yes you do notice but it is so laid back and small that it kind of has this homey feel to it and I completely understand why Kuni likes going there. We sat with some of his friends and had a few drinks. One of the girls used to work at FS Sydney (before my time) so we had fun talking about all the people she knew. The rest of the girls were more than happy to chat and give me advice on where to shop the next day. There should be bars like Toca Me in Sydney. Small, cool, relaxed, little balcony and table service where it never felt rushed.

The girls were heading off to Karaoke, however Kuni was missing the company of men so we then went to a gay bar nearby called Mox. Cheryl gave us all a lift, so there was four of us squished on the back seat rather awkwardly (my legs were on top of Kuni), thankfully it was only two blocks. Mox was up on the 4th floor and had a little balcony area. It had a very private feel, still laid back but not as much as Toca Me. We ordered a drink called Liquid Ecstasy and Kuni compared it to a long island ice tea. It was rather potent. I don't quite know how Kuni managed to do two of them. They had this old style swinging seat, where you sit facing one another. It took a while to understand the swings rhythm, but as soon as you did it was easy to keep it going. So there we were with liquid ecstasy, swinging back and forth and back and forth. Kuni cringed both times I put my drink down on the stationary table beside us and subsequently when I picked it up (no spills, it was all about the rhythm). Stepping off and you still felt the motion of the swing (or maybe that was the drink). We then sat on the balcony until they closed at 2am (that's 4am Sydney time, it was a long day) just chatting away. It was so good to catch up. 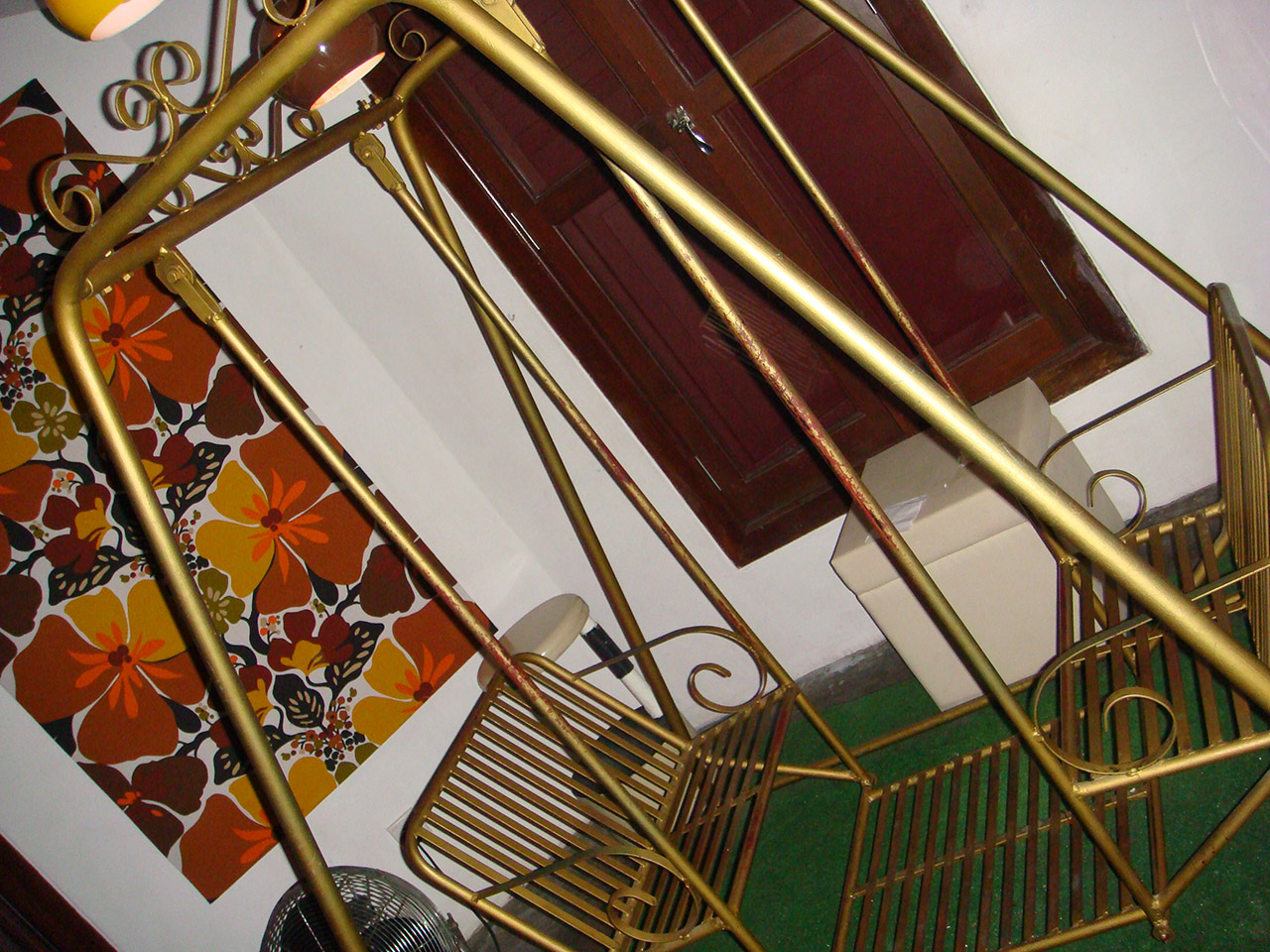 I happily crashed in my King size bed. Day one, complete.

My $7 Bottle of Water

How to leave HK in style