We started the morning at a corner cafe. A decent local breakfast. The smallest thing they served was 3 eggs of your choice in a pan with potatoes. I know I said I didn’t want to see food after last night but this was something I could not miss. We had our fill again well before finishing off the plate and the plan was to head down to ‘Cloud Gate’ or affectionately called ‘The Bean’ but it was starting to rain and we thought it might clear up in the afternoon, so back to Water Tower Place for some serious shopping. Lego (ok, maybe that isn’t serious), Akira Footwear, Betsey Johnson, Victoria’s Secret and Abercrombie. I don’t know how long this all took but I think it was around 1 o’clock before we had dropped more bags at the Hotel and jumped in a cab (the rain had stopped).

Mum must have had fun when the shop assistant in Betsey Johnson MADE me try on about ten dresses, funny that the one I had my eye on in the first place was the one I ended up purchasing. Stunning cream lace over black with a black bow and pleated skirt layers. After sitting there for so long it was only when I was at the counter that Mum found these two short sleeve cardigan’s on sale and joined me in carrying a pink bag around the shopping centre.

We won’t talk about VS, but after meeting really nice shop assistant’s in the same shop two days earlier the one we got was, well a bitch to put it nicely but at least Mum got something out of it, I just got an argument and embarassment (fortunately there was no one but Mum in that change room because I would have been completely mortified had there been other people).

Anyway, needed to be said. Abercrombie distracted me with many, many things to try on (much like Banana Republic where I was trying on ten items but this was play clothes). Moving On… 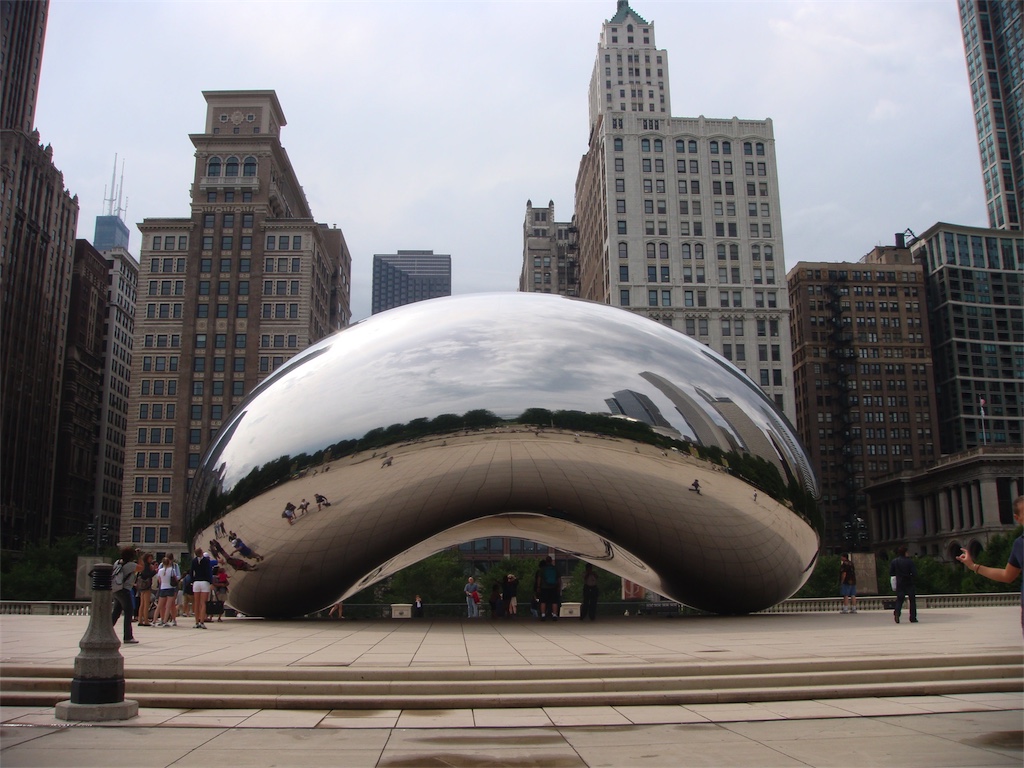 I had seen pictures of this sculpture. I’m sure most of you have too. It is a mirrored bean effectively but it is called Cloud Gate and I can tell you now no picture quite does it justice. It’s stunning as both a still piece of art and even more so as a moving piece of art. We initially caught a glimpse from the distance and I was floored immediately. I never anticipated there to be such clarity in the reflection, it was phenomenal. I can’t quite describe it but you could take pictures from a distance and see yourself taking the picture in the reflection. The seagulls sit on top and laugh at you below but by far the most interesting part of the art is watching how each and every person reacts to it. Some are curious from a distance, others place hands, feet, sides of faces against the sculpture to watch the different ways it changes with what is around you. We sat on a damp bench for ten minutes taking in the people, the amazing view behind us which was really in front of us. It was bizarre in such an awesome way and I felt like I could spend hours there watching (I felt that a dear best friend that wondered why I was even going to Chicago would have been captivated and would have spent an entire day there with his camera). Fortunately with my new camera I think I got some amazing shots but there are many that I need to sort through. I’m hoping for that perfect one that can sum up as best as I can what it is like looking at the Bean. 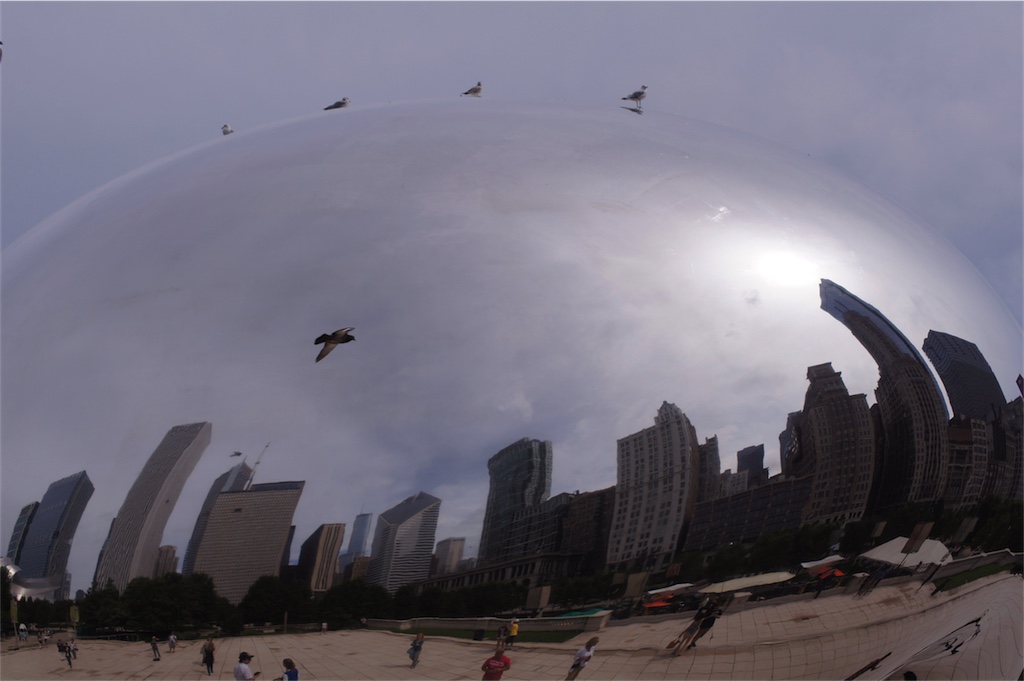 From the Bean it began sprinkling rain again. Umbrellas up I couldn’t believe my luck when we walked past Garrett Popcorn. Haven’t cracked open the spoils yet so will need to give you the verdict a little later. A small is huge and is only 4.60.

VERDICT LATER…
Best Caramelised Popcorn Ever. The soggy leftovers are still in the kitchen at home, and I’m still prepared to eat soggy leftovers because it still trumps everything else.

From there we bought out half the Sephora store, was saddened to see that Borders looked to be closing up shop on one of the main street’s of the Loop (crazy, are they going bust in the states too?). By that time Mum needed coffee again and the first place would have been great because I would have scored a chocolate milkshake but it was a little dingy, so we walked back to the Gold Coast area and on the way stopped at a cafe (no milkshake, only coke) that was just about to close. Only then did we realise it was almost 5 o’clock and there was still a lot of shopping to be done.

A ‘we-are-only-going-to-look-in-Burberry’ ended up being fatal to my credit card. Well actually not fatal because here I am worrying that they are going to block it at any moment (I forgot to tell the cc company I was going away) by it went through. I told myself then that was it, no more spending and mostly I kept to that, only adding a few little items after that.

Loved the Crate and Barrel store on Michigan Avenue with all its cool and funky homewares. Bring please to Sydney so I can buy stuff!

Our first shop stop in Chicago also ended up being our last (well second last because we were worried that it might close at 6pm). Mum finally got her Tiffany’s and I used Trent and Sue’s money to buy a cute little necklace (it was either that or an American Girl Doll and everyone I have spoken to so far agree I chose wisely). We made it back to the room with enough time to do some organising and a redress for dinner.

Since I listened to one bosses advice and went to the Cheesecake Factory I felt obliged to follow my other bosses advice and since he used to live in Chicago I thought it was a pretty safe bet. Bring on Mike Ditka’s Restaurant. Footballer turned Coach turned restauranteur (think like Michael Jordan’s in NYC). Steakhouse of course with memorabilia lining the walls. Now our favourite concierge told us that we had to at least try the pot roast nachos. She told us to go in knowing that you will barely make a dent if you want to eat your steak later and so we did and I know I’ve used this a lot on the trip but BEST NACHOS EVER! If I hadn’t been needing to try the steak I would have cancelled my order and just eaten that. YUM! Highly recommended people, but remember the rule, it’s there for a reason. The smallest steak came out shortly after, 8 oz. Filet Mignon, perfectly cooked, close to Moncur but not quite there, not to say we weren’t happy. I just made it through, forgetting the chips and digging deep into the steak. I think our waiter was surprised that we a) finished our steaks and b) ordered ice cream to share. Great last meal but as soon as that was over and our last short walk along Michigan Avenue back to the Hotel it was time to do some serious organising, packing time had arrived.

From 12kg at Sydney Airport to 2okg on the bathroom scales in Chicago… yeah, pretty good effort.