This morning was an earlier start as we had booked tickets on the 1st architectural river cruise of the day (10am). Mum grabbed a coffee from the real coffee place in the shopping centre in the same building as the Hotel and we took a nice stroll up Michigan Avenue to start the morning. That’s when I found out where Burberry was but that is a story for tomorrow’s blog. We get on the boat (pissing a guy off because we went around to take an aisle seat on the other side instead of going through the people to get to it) and think we are going to need sunscreen. It was hot and the sun was glaring straight onto us but no sooner did we do that the clouds came over and it started getting really cold.

The cruise was a great way to see all the buildings of Chicago (Frazer was right again) and take in the sites without much effort on our part. I can’t remember much of what was said on the tour but I know it was informative and I want to do some more research on the 1871 (I think) fire in Chicago that jumped the river and burnt most of the downtown area to a crisp.

The cruise went for an hour and a half so when we got off the boat we were thinking… walk to Navy Pier and find food. Unfortunately my idea of the Italian Beef failed and we ended up with Ben & Jerry’s ice cream for breakfast/lunch (tough life huh?). Navy Pier was quite a nice area with great views of the city and the lake. We jumped on the Ferris Wheel and I made Mum wait for me as I became king of the kids and jumped on the giant swing. 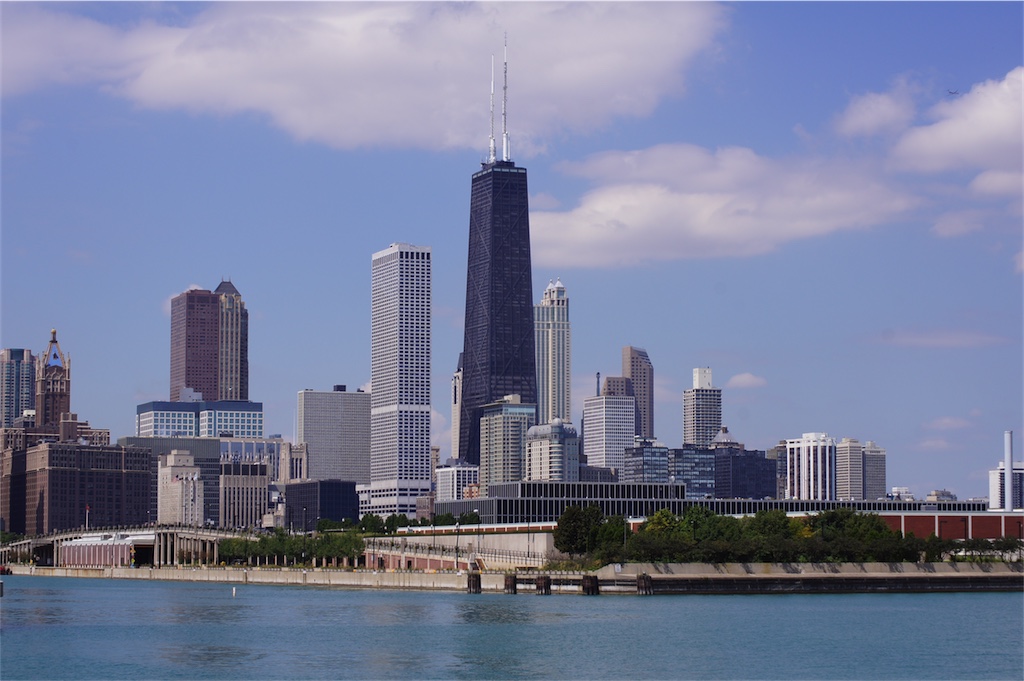 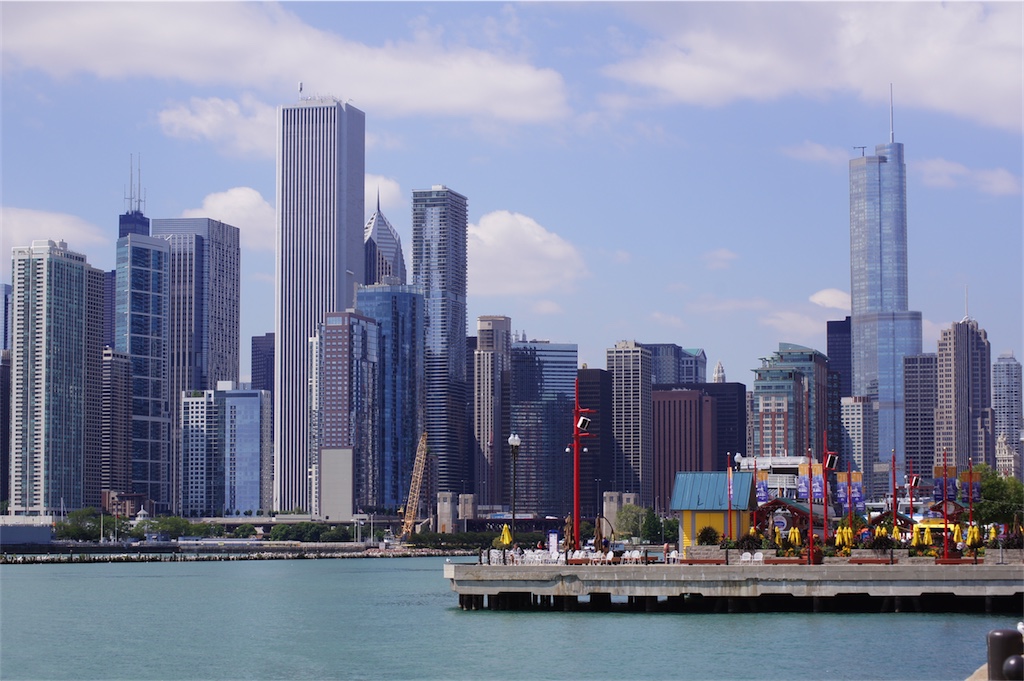 We jumped into a cab and headed out to Wicker Park (a local area to shop). What drew us here? Oh, just one store (yes, just one), but it is one of my top five stores to raid when travelling. Marc by Marc Jacobs. I heart Marc by Marc Jacobs. Why do you have to have so many little (and big) tempting items that make me spend money? I’ll give you a clue. The amount of characters so far in this blog entry divided by two was the amount I spent in the store. Mum was considerably less that me.

We took a walk around the rest of the shops, found a really cool shoe shop where Mum tried to catch up to my expenditure from a lovely shop assistant that helped us with where to catch a cab back into the city from (she took us outside the store to show us). Mum best described Wicker Park like Glebe; when it was still a little hipster and less trendy. The perfect example is coming up in a second.

Mum needed a coffee (I was dying for a coke too by that stage) so much so that we went into Starbucks but walked straight out when there wasn’t really anything left to eat. Enter the Wormhole, a delightful coffee house that made me feel right at home. DeLorean in the window, Galatic Empire dollars in the tip jar, retro nintendo to play whilst you drink your coffee, the Marshmallow man from Ghostbusters sitting on the sugar station and a collection of Star Wars coffee cups above the refrigerator with the coke in it (scores!).

Whilst Mum was waiting for her coffee inside I was outside chatting to the two guys sitting next to me. One a Nomad, covered in tatts (Black arms which made we wonder if he hadn’t liked what was there originally) and visible stitching in his ears (think like he had expanded the pierced holes in his ears only to stitch them back up), the other was less of a nomad and a little less confronting in appearance. But they were both great guys to chat with. Mum came out and we talked about Sydney, Chicago, the coffee, the geekiness that drew me to the cafe… Mum, it wasn’t all about the coffee. It was such a local joint and I think that’s what made the experience. 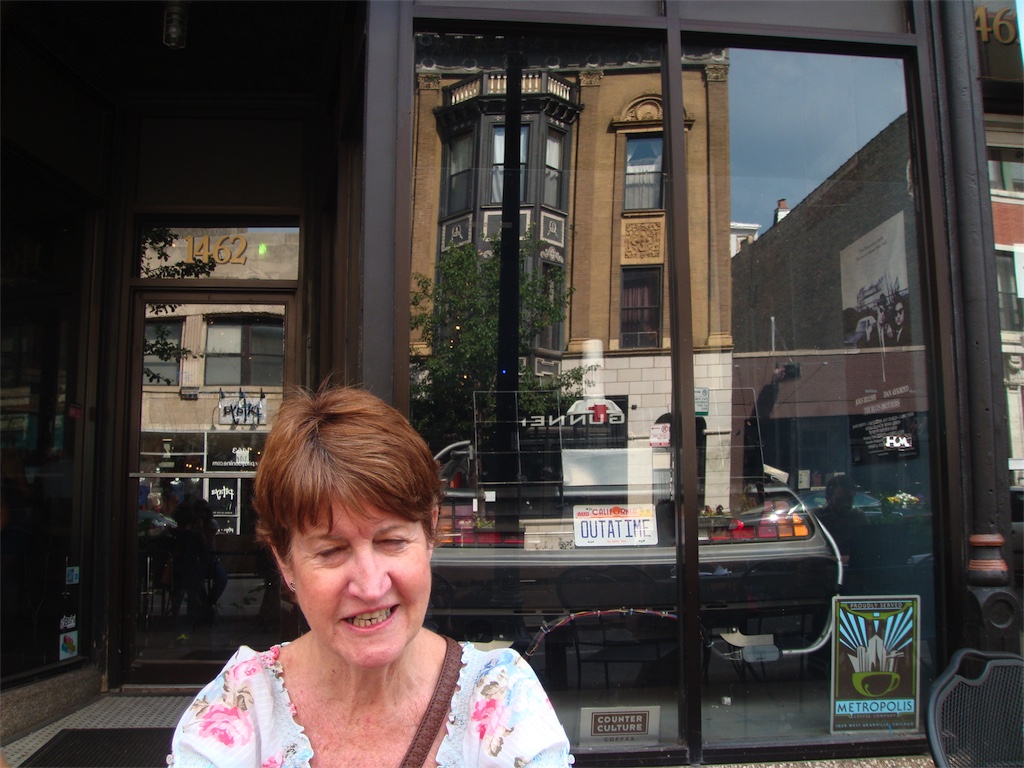 Mum will kill me for posting this charming pic of her but it has the DeLorean in it!

Back to the city and a quick shop in Oak Street (Juicy Couture, M.A.C) and then, well I have already blogged this part because I had to write about it as soon as it happened. This was the night of the DDPoD (if you are yet to read that small little paragraph I highly recommend you go do that now). Pizano’s is a chain but the restaurant we went to was small and more pub like. Seemed like the locals were in there including two cops that came into the restaurant, uniformed and didn’t leave before we did so clearly not for takeaway. The waiter was good for a laugh but felt horrible that we thought the sizes of the pizza was spelt out by slices and not how many people it can feed. We were going for a large but he said, small or medium. Yeah, we should have got the small.

That night I didn’t think I wanted to see food for days.