I was packed on the very very light side, everyone else that began to head to the beach at the same time as us were planning the long-haul, eskies, shelter, towels... even a tarp to place a doona on top of. The reason for this? Just the biggest Annual Air and Water display show in the US. Let's just say this to start... We arrived and stood at the front of the beach, we left and we would have been lucky to find a space within 15 metres of the water. Oh and it is not like watching the fighter jet scoot over the Grand Prix. It's watching 4 or 5 fighter jets in ONE display, skimming so close to the water that my camera shows it just above the people on the beach. The Navy Seal parachuters dropping from the sky being circled by 4 planes in a downward spiral. It is watching a refueling plane fly into view from the Seasons Restaurant (more on that later). It is walking through the city and hearing the jet engine only to realise when you look up it is already gone (btw it sounded way faster than the Melbourne plane). 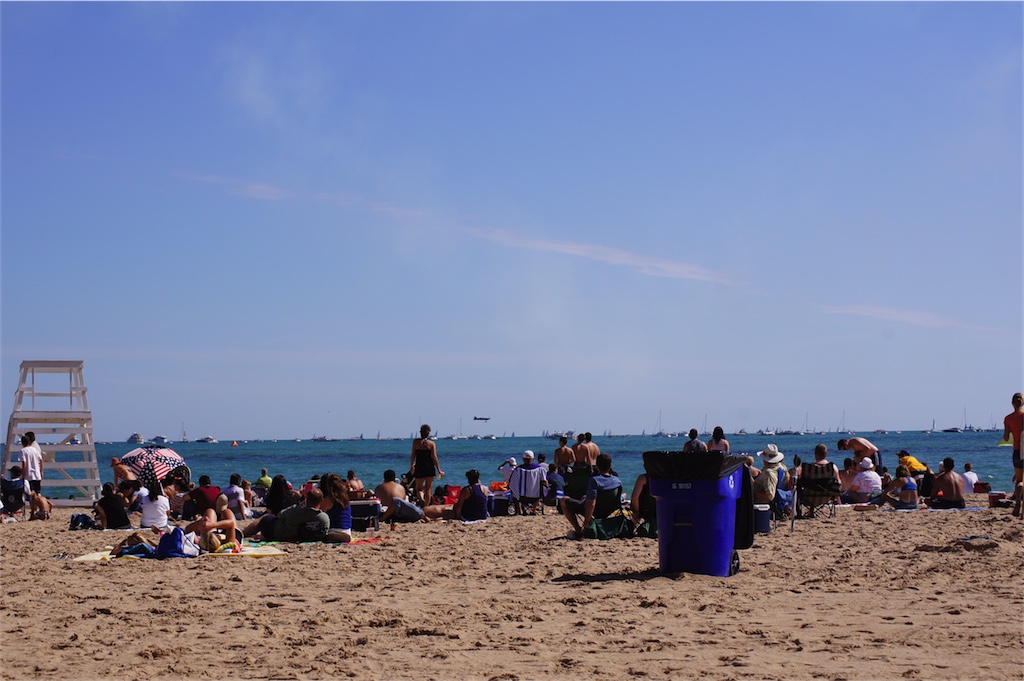 Oh. I didn't even talk about how strange it was to swim in freshwater. Besides the fact that a lake that looks more like an Ocean is a REALLY strange concept for me. The water is strange without salt, lighter, no smell and instead of seaweed there is grass (I said GRASS) on the sand.

What an experience to have. I kind of wished I could have stayed longer but we had a really busy day ahead of us.

Back to the Hotel, even though we could have spent the better part of the day outside, before heading downstairs once again to the restaurant but this time it was for brunch. The end result was of course us being sent into a food coma and struggling to find the motivation to shop (although we did).

I don’t think I gave Brunch as much attention as it deserved. There were many foods I could have tried but in the end sanity and stomach prevailed. Omlette Station 1st Course, Salad Station 2nd Course, Carved Meat Station 3rd Course and Dessert 4th Course. Other Stations included Asian & Moroccan, Breakfast, Waffles and Pancakes, Seafood, Sushi, Cheese and Cold Cuts. Yeah, writing it down has just confirmed… I did not do it justice at all. Oh and there was a Sangria station, but I did manage to attack that.

The people watching was bizarre as you can imagine. We had a table that looked out onto the whole dining room (and them onto us). Wealthy families with the Queen Bee mother ruling the table. The sons with their pretty blond wives. The pastel suit dress, one child, one husband in tow. A couple that clearly thought brunch was an occasion that needed to be dressed up for by wearing dinner formal wear. Hell, when I walked in I could feel the eyes burning. The cold was only part of the reason I put my cardigan on shortly after sitting down.

Near the end of our brunching experience four people came to a table just opposite us, two of them had very recognisable accents. Then they were talking (he was especially loud) about first class Qantas and how there is nothing like it in the world (cough cough Yeah, right). The massages before you board the plane and the food. Mum and I just turned around and smiled, yeah, we hadn’t travelled like them at all. We guessed that he was new money because all he wanted to do was to talk about it, his wife was far more pleasant (and quiet). We kind of took a stab that he was from BrisVegas or Gold Coast, but Mum was saying at the end they were talking a lot about Sydney.

Now since this was meant to be a shopping trip we had gone a long time without really doing any shopping. So this afternoon was devoted to that and what better way to begin one’s shopping adventures than in Tiffany. Searching the whole store we were unsuccessful in finding the earrings I was looking for. As a stab in the dark we asked the shop assistant (I think I remember his name as Chad but perhaps that was from another store). With the little description I could give him he jumped on the system to see what he could find… nothing. Website (1st attempt)… nothing. Website (2nd attempt) SUCCESS! But that didn’t mean they had them at the store but he said he was determined and left us upstairs to go searching downstairs. Minutes later I see him carrying a display box upstairs, “Mum, I think he found them.” He had. They were perfect. Purchase #1. NB. Mum was still deciding and didn’t buy anything during our first Tiffany adventure.

Next to Banana Republic, my trusty work clothes backup (because I never find stuff I like in Sydney). One (almost two) dresses and three tops later another success. Side note: it is amazing how much time can be wasted when trying on about ten items in the change rooms. There wasn’t a huge amount of shopping by the end of the adventure but we did like the new Allsaints Spitfields store with all the old sewing machines in the windows. Nice to see UK (effectively Australian) sizes in the states but that still didn’t help me when trying on a couple of dresses. I ended up with this funky wrap around cardigan but the price was a little more than I would expect to pay in the states and a little less than I would expect to pay in Australia.

Still in our brunch clothes and not at all motivated to change we dropped the bags in the Hotel and headed across the road for a drink (because there was no way either of us were going to eat dinner). But when I say across the road I don’t mean some pub on the corner. I’m talking about the 96th floor of the John Hancock building… and the view. Unreal! We arrived just as the sun set, got a table next to the window looking south away from the lake but with a twist of the chair we also looked east, down the loop and across the lake. The photos I hope do it justice because we nursed our cocktails until the orange sunset had all but disappeared from the sky. 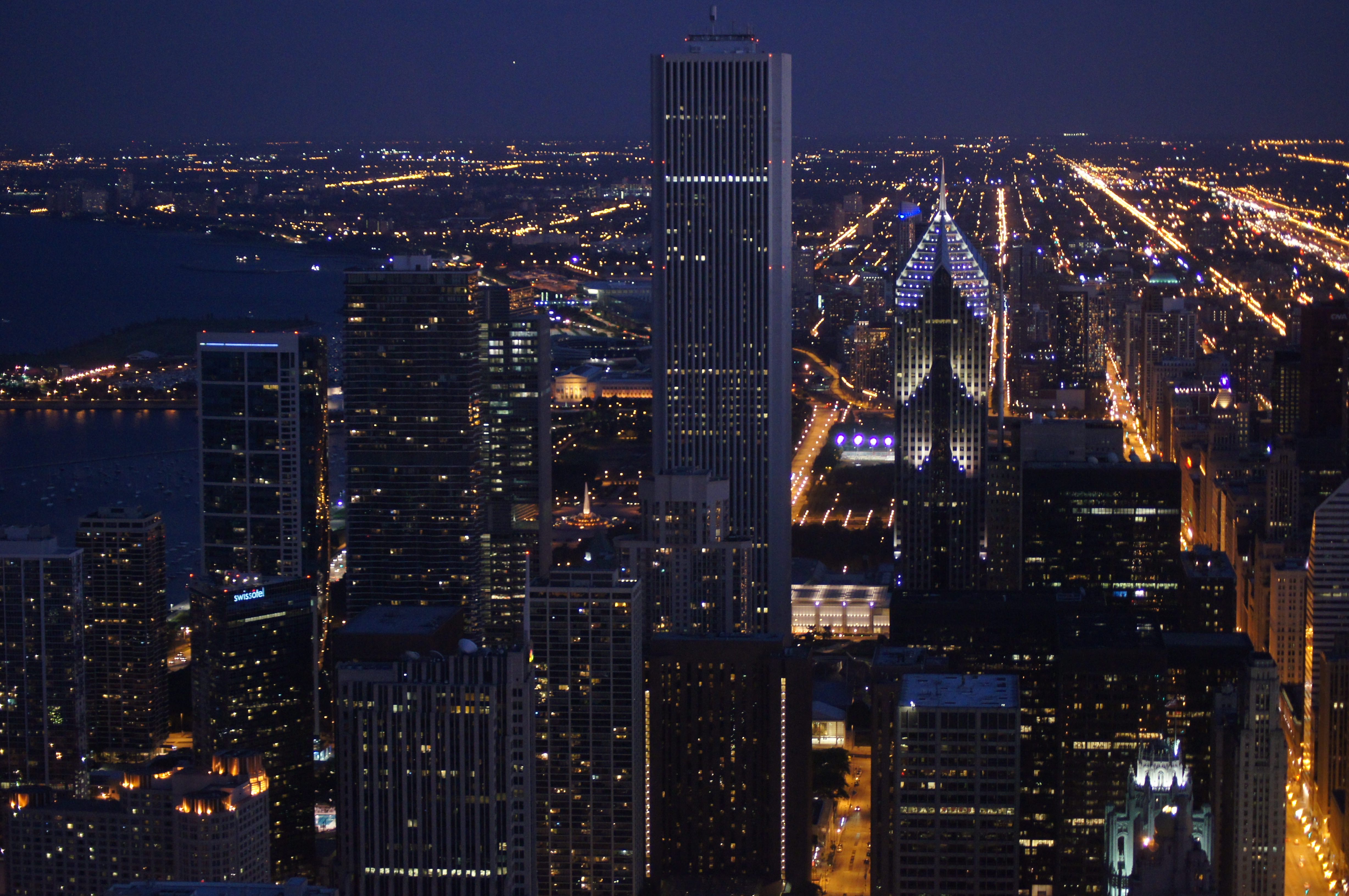 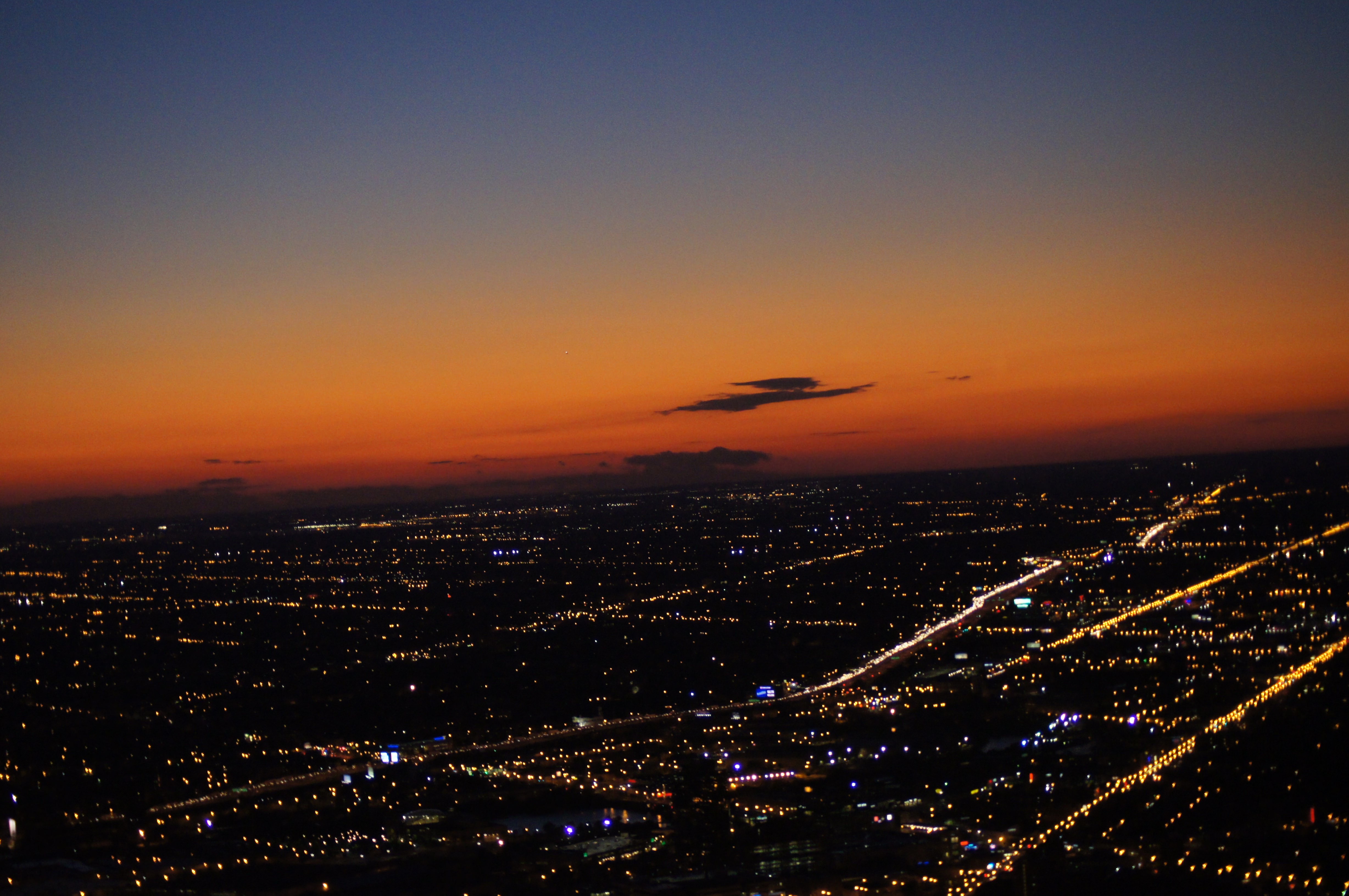 By that stage we were looking for nibbles so stopped in the bar for a bite to eat. Perfect timing they had just come into the heirloom tomato season (they grow these on the roof of the Hotel) and had a mixed sandwich plate. YUM! I thought we were over food but the nice waiter from the previous night bought us two desserts that were leftover from brunch (I tried not to mention that we had been to brunch but that ended up coming up in conversation), fortunately the two desserts that he bought out were two that we hadn’t tried.

So even when we don’t plan on eating much we still end up stuffed by the end of the night.