Let me clarify for a second, we bought plenty of clocks with us… Phones, laptops, watches but this morning when we all woke up EVERYTHING was stuck on Sydney time. None of us had any concept of time, but fortunately for us it was only 630am.

The breakfast room sits on the side of the Hotel and partly over the cliff face and looking directly out on to the water. It seemed everyone that had been working dinner last night was back for Breakfast this morning, including one matre di who obviously L-O-V-E-S her job (since I can’t add a sarcastic emoticon here, assume I have done so… Now). First thing I noticed on the buffet? The CHEESE—the ridiculous amount of Buffalo Mozzarella. Think an over-sized birthday cake size with a hole in the middle. And that wasn’t half the cheese available, Boccocini, Ricotta and then about five hard cheeses I won’t try and name. Next to the cheese, and no less impressive, was the redest, most invitingly juicy watermelon I have ever seen and the taste? That watermelon had it all, I will attack that before the Coca Pops tomorrow morning.

With the morning to be taken at leisure we headed out of the Hotel and onto the streets of Sorrento for the official Day One of our holiday (I refuse to count the two days prior part of our holiday, by the end it was more a major test of the family’s patience). It was not long before we were dodging scooters, blindly leaping in front of cars on pedestrian crossings (I learnt quickly, if you stop, they won’t… If you don’t, they will). Our first stop was the Il Duomo of Sorrento (Cathedral), a building that from the outside looks plain, but the inside… This maybe a small taste of what is to come, but the point was it had taste. 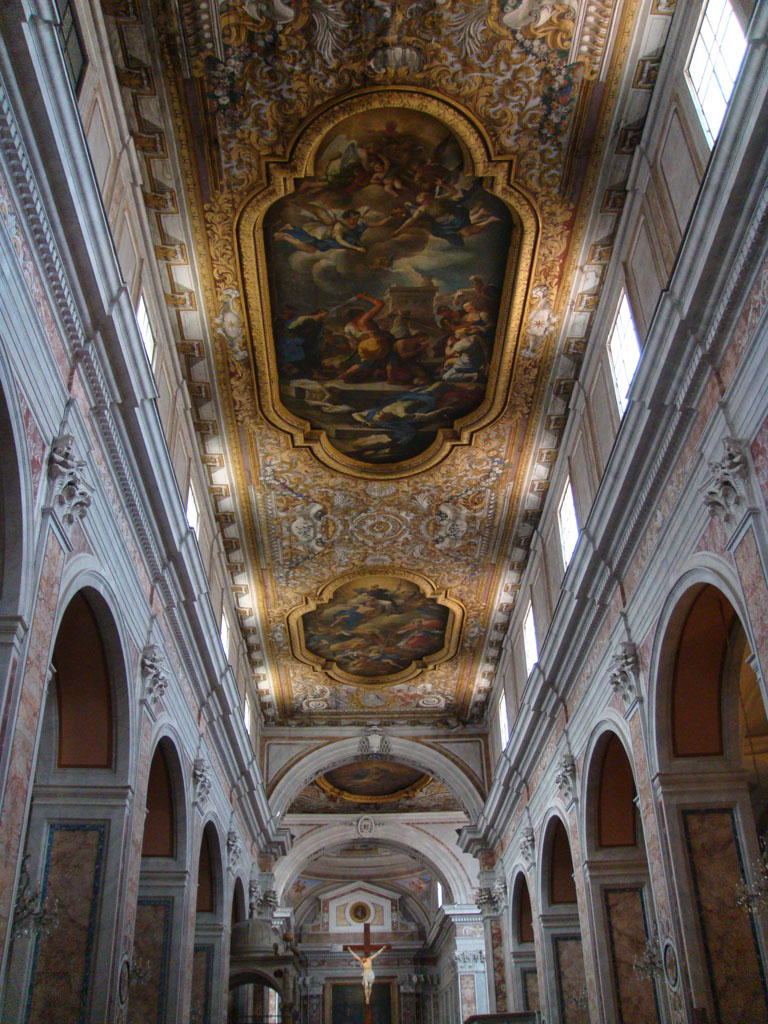 We walked the streets and lanes of Sorrento, visiting the ancient (2000 year old) part of the wall that once surrounded the town, looking into quaint restaurants and shops. Jonno would appreciate the over abundance of Spongebob Squarepants in all forms of water activity fun, as well as a random person wearing a t-shirt (tourist obviously, I’d say SS is not part of many Italian wardrobes). We visited another two churches, one plain inside and old, the other with a very nice crypt below the alter and a pretty statue of Assisi outside (I can tell I’m going to be using that name a lot so I’m abbreviating now), Mum and I had an old Italian man speaking to us whilst taking in the view from the edge of the cliff just next to the Hotel. He seemed happy to chat, even though he knew we didn’t understand. We watched the sunbather’s on the rocks below. We also watched as a young girl slipped down the steep walkways down to the beach area, clutching her ankle, crying in pain. Mum and I thought we might leave that walk, at least for today.

It was a lazy morning, up around 30 degrees and it was getting time to stop for a drink. Since there is not much of Sorrento we ended up back at the Hotel having a drink by the pool and watched all types as they enjoyed the summer sun, and I mean all types, including those teenage girls that try to wear an adult bikini when they really shouldn’t to the large women who have a little too much for their swimming costume to handle.

We began our afternoon by meeting with our tour guide at the Hotel. She was to take us by train to Pompeii. Stick thin and Italian tanned, Alesandra was through and through, a local. She knew her stuff too, by the end of the tour I was overloaded with Pompeii info, but back to the beginning.

Pompeii is huge. It’s a city. Walking in and out of the buildings, the shops, the public spaces. Wow, and I mean wow. So this is where I tell you we do like the Roman’s did. So there were shops, counter at the front with holes for large pots of food, spaces for seating at the back. It was the Roman take on McDonalds and these things were all over the city in what would have been high traffic areas for non-locals. Sounds familiar huh? How about a bakery then that has a wood fired oven that looks surprisingly the same as the ones we cook pizzas in today? 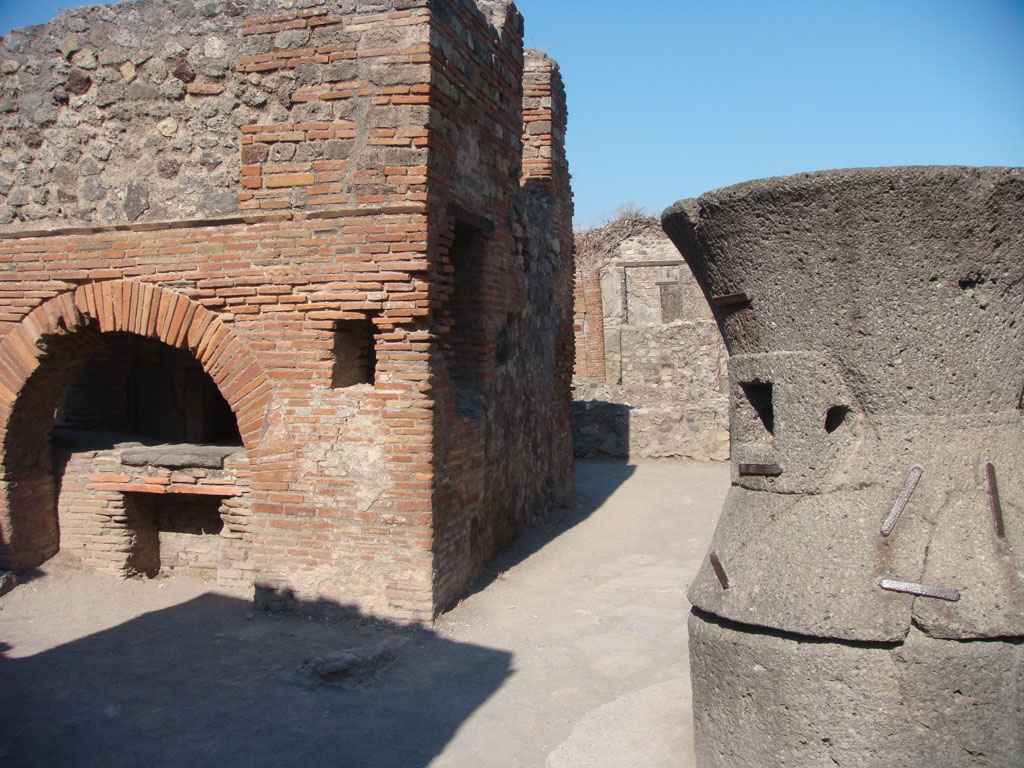 Those Romans weren’t bashful either. Brothel’s were everywhere, but the one we looked into was apparently the main brothel of Pompeii. Needed a menu to decide what you wanted? Sure, those were pictures above the door, some of which are still there today. Man on top, woman on top, with two levels you were going to find something to tickle your fancy. What about those people that don’t know where the Brothel is, how do they find you? Easy, just like a street sign on the corner of your street, stick a stone dick on the wall so people know they are heading in the right direction. I thought it best not to take a picture of that in front of Mum, Dad and the tour guide…. though I really wanted too. 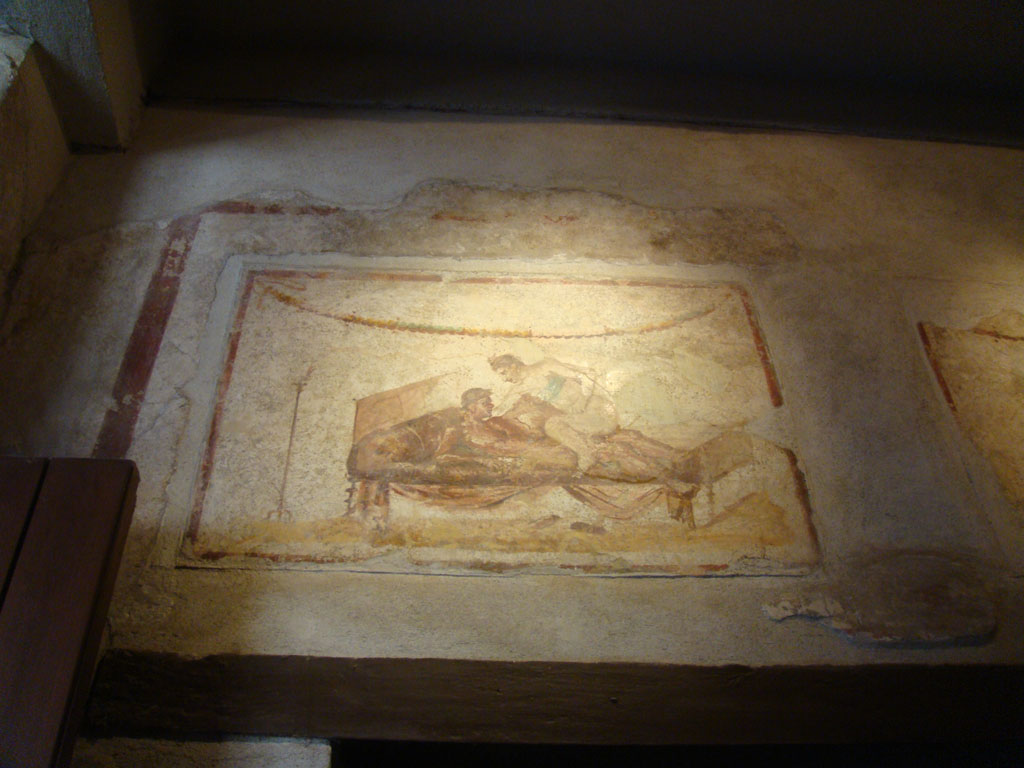 It was fascinating, we saw houses, big and small, forums and markets, McDonalds, bakeries, basilicas. We saw main roads and alleyways, stepping stones across the street like zebra crossings (though at the time it was to avoid all the crap on the roads), water collection tanks on the side of the roads. We saw spas where even the parts of the roof were still intact and frescos still showing their amazing colour. We saw a theatre that specifically says above the entrance that it has a roof, so people knew it was covered from the weather. If you want to imagine Roman life, go here. I can’t write this in a way you’ll understand, so here are some pics. 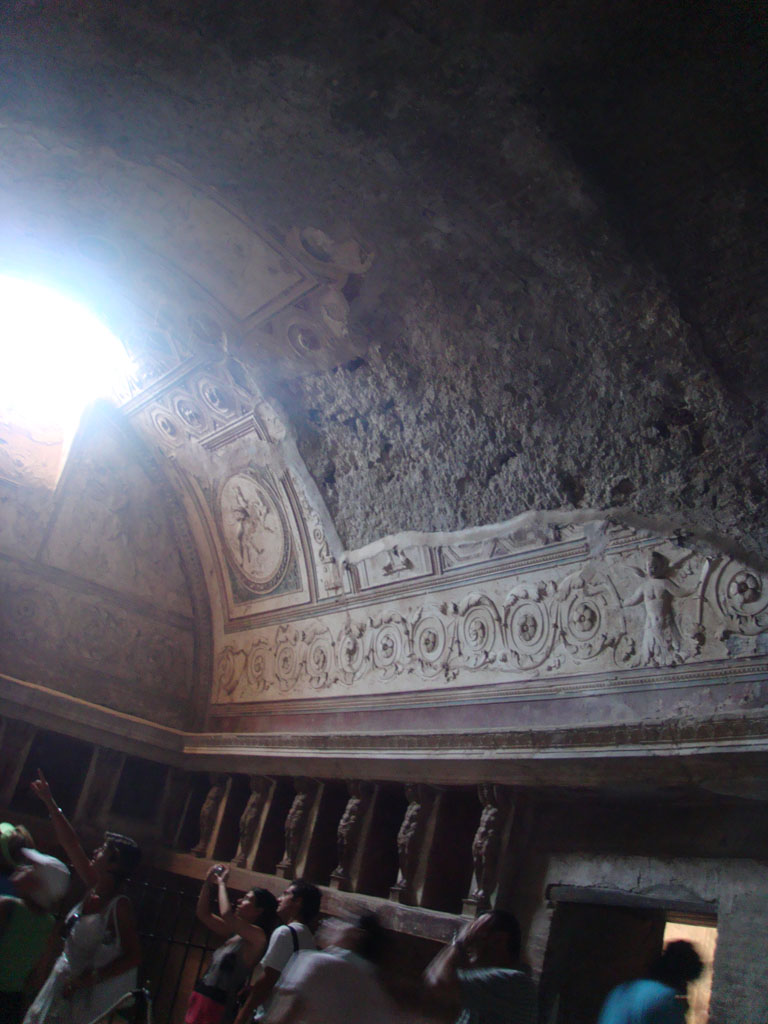 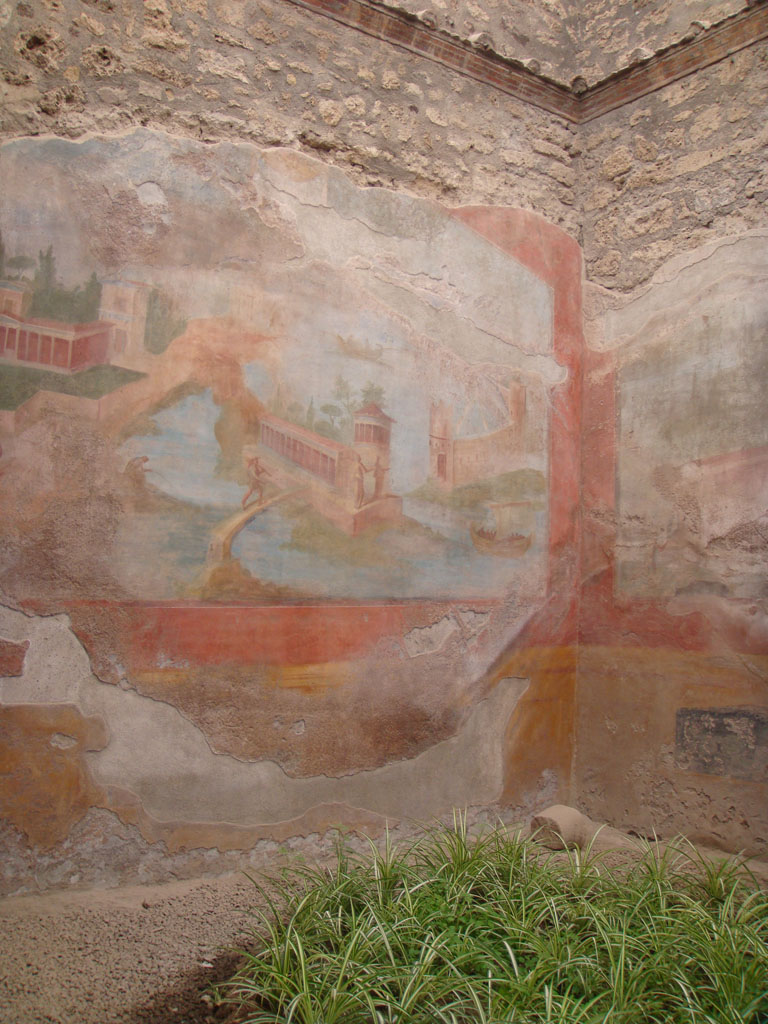 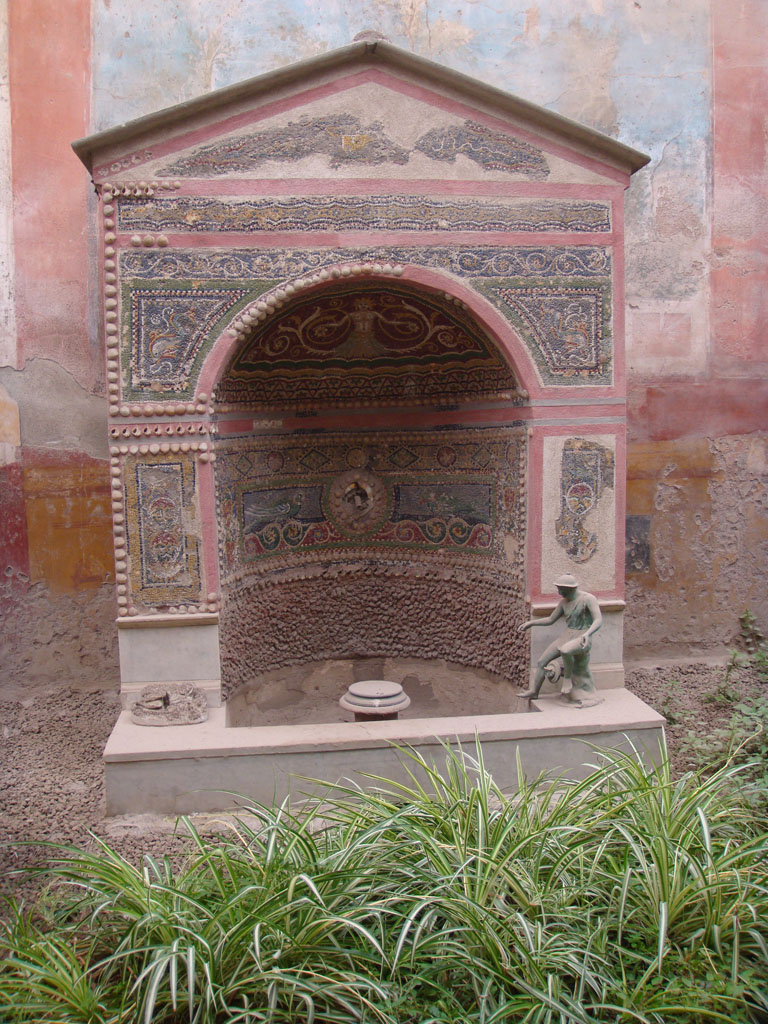 Local train back to Sorrento and my first Gelato in Italy. I stuck with the basics, to evaluate the flavour. Lemon. Wow, our versions are so watered down. Back to the Hotel and we all pretty much collapsed, finally making it back out at dinner time to the pizza restaurant across the road. I had Neopolitana, Mum a Margharita with Ham and Mushroom and Dad… well his was described by the waiter that bought it out as ‘An English Pizza’. He wasn’t impressed. Mum and I found it brilliant though. Mine was Tomato and Basil… no cheese, but wow (am I going to be saying this a lot about food here). The flavour was amazing and I devoured it ALL, that and my first official day in Italia.

The Isle of Capri