I was the first up this morning. After avoiding the shower in Death Valley I knew there was a definite need for one. It took about five minutes for the hot water to kick in, so it was a cold shower (nice start to the morning).

We left a little later than previous mornings and headed back into Yosemite National Park to do the area known as Yosemite Basic. In short, where you can go when everything else is closed because of the snow. I started the driving in the morning, it was pretty easy going... at first.

Our first stop (besides some quick photo stops) was the Visitors Centre. Nothing special, but always good to go and see. We then walked down to Lower Yosemite Falls, which wasn't really a fall at all, being September it was dry. It was funny, it seemed only a short walk and very early on I guessed that because of the lack of sound we weren't going to see much water falling.

Trent grabbed a Croissant and I grab some chocolate chip cookie with ice cream in the middle. I was over that before I finished it. The bins have a special latch on them (for the bears) you have to put your hand into a covered top section to release a latch and open the bin. Bears have a great sense of smell. They can smell a dead dear from three miles away. Which reminds me, we did see a dear yesterday by the lake. Bears also see in colour and can recognise things like picnic baskets and eskys.

After that little break we made the decision to take the 32 mile road out to Glacier Point. On the way just before you reach one very long tunnel is a viewing area known as 'Tunnel View' from which you can look down the valley. It was an amazing view, probably the best we had seen so far, but that was before we got to Glacier Point. 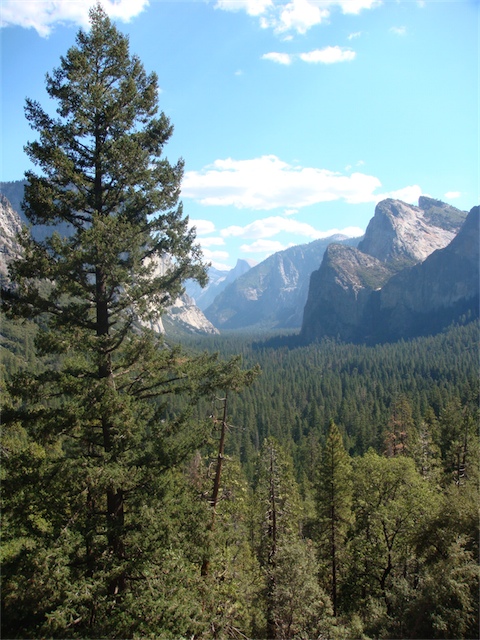 (would have been an impressive view if I wasn't in the car). Anyhow, we drove 32 miles to reach the half sphere, which is the first photo in the blog.

Not bad huh? I got Trent to drive back out of the park and on the way out from Glacier Point we got stuck behind a bus, well you could imagine it.... SLOW. So at the first opportunity (our car being second behind the bus) Trent darted out and overtook, just in time for the lines to go solid again. It was a great move that he was pretty happy about, even though VERY shortly after the bus pulled into a viewing point to let all the other cars through.

We were now on our way to San Francisco. We past two tiny towns before finally finding a decent fuel station at the third, which was a quaint little town, what you would expect in America. He then drove us to Oakdale, about 100 miles from San Fransisco. We stopped to grab some food and then pushed on, this time I was driving. I drove over many train lines and made my way onto my first interstate. It started out as two lanes, peaked at 5 plus a lane for turnoff. I ended up driving all the way from Oakdale to San Francisco. Now that was a driving experience. We came over the Oakland Bridge that was full of traffic, drove down into the city trying to get to the Hotel, which took a while because Market Street was pretty busy and the pedestrians were blocking a steady flow of right hand turners from the lane we were in. Got to the Hotel only to find that the driveway is around the back, no major drama but by that stage Trent had had enough.

I don't need to tell you that the Hotel is beautiful. Artwork all over the building. A far cry from where we spent the last two nights and the beds are heaven. We are on the 11th floor and look out onto the dry dock where one of the big cruise liners is sitting. It's quite a site.

We ended up walking around without much luck for dinner. Finally we went downstairs to the Westfield only to find they were also closing (it was 8pm). So we ended up at this very nice steak restaurant in Westfield on the 4th floor where I had a delicious burger covered in brie cheese and Trent had a steak followed by a chocolate pudding. Back to the room and watched a bit of TV before turning in for a wonderful night's sleep. It's now 845am and there is nothing much happening in the city before 930-10am so I'm going to get up, have a shower and head out. Keep posted for another posting.