New York City. If someone had asked me if I thought NYC was a possibility I would have laughed, shook my head, and secretly daydreamed about it because how cool would it be? I guess I just never anticipated that after leaving Sydney, after three and a half years in Whistler I would be packing bags (and boxes this time around) to move to not only a big city in the US, but THE big city in the US.

But there I was with a once in a lifetime opportunity to live in NYC...

One moment please, I need to pinch myself.

If anyone wants to test their organisational skills then I highly recommend moving to another country. It is a gigantic puzzle of visas and forms, of boxes and moving, and trying to find time for the list of things you wanted to do in Whistler but never had time for (did anyone say BUNGEE!?!) and this was all before I left Canada. What awaited me across the border was a seemingly endless stream of red tape that would take months to battle through. In the days of global cooperation, travel and a small thing called the internet you would think that important information could easily travel with you, even in a small part, to get you started. Things like your credit history, which is especially important when moving to a country where EVERYTHING runs on credit. Alas that is just a fantasy. I spent the first month of my NYC adventure running between ATM's and banks on a daily basis to deposit enough money to survive the next withdrawal. Financially I felt like I was in a bottomless pit which was probably not helped by low Canadian Dollar vs. the Green Back or that missing wire transfer that fell into the ether for 3 weeks before it magically appeared again... in the wrong account.

But despite all this red tape two weeks later I found an apartment willing to take a LOT of my money, which totally made sense since it was on Wall Street (and yes, I admit to having a lot of fun saying that to people). Now the only thing I needed was a bed, a couch, a TV... Well all the furniture my shoe box studio apartment would take and how boring would that be to do all that shopping without my favourite shopping buddy? Insert Mum here in my NYC adventure. I put her to work, carting bags and bags (and a TV) from the Hotel to the apartment, cleaning pots and pans and placing paper towel inbetween them when stacking (because that's what Mum's do). She was rewarded with a blow up mattress, our first Thanksgiving with Macy's parade balloons and a turkey she did not have to cook herself.

It took a month but things were starting to settle down, my furniture was arriving and my bank finally approved my credit card. My clothes were mostly unpacked, until I had to pack them again because I was flying home for Christmas! Now I'm not going to complain about my first Christmas back home in four years but I can tell you that at the time I wasn't ready to leave. It felt like I had just arrived and there I was packing up again.

Since returning just before New Year's NYC has become a revolving door of family and friends visiting of which I am most grateful for (it's Thanksgiving time so I am giving thanks). New Year's with Josh and Sean, a rained out baseball game with the parents, photography in Central Park with Amanda and rooftop drinks with Jonno and all the work friends that came to help out with opening. I've had more visitors in a year in NYC than I ever did in Whistler so I'm lucking out right now. 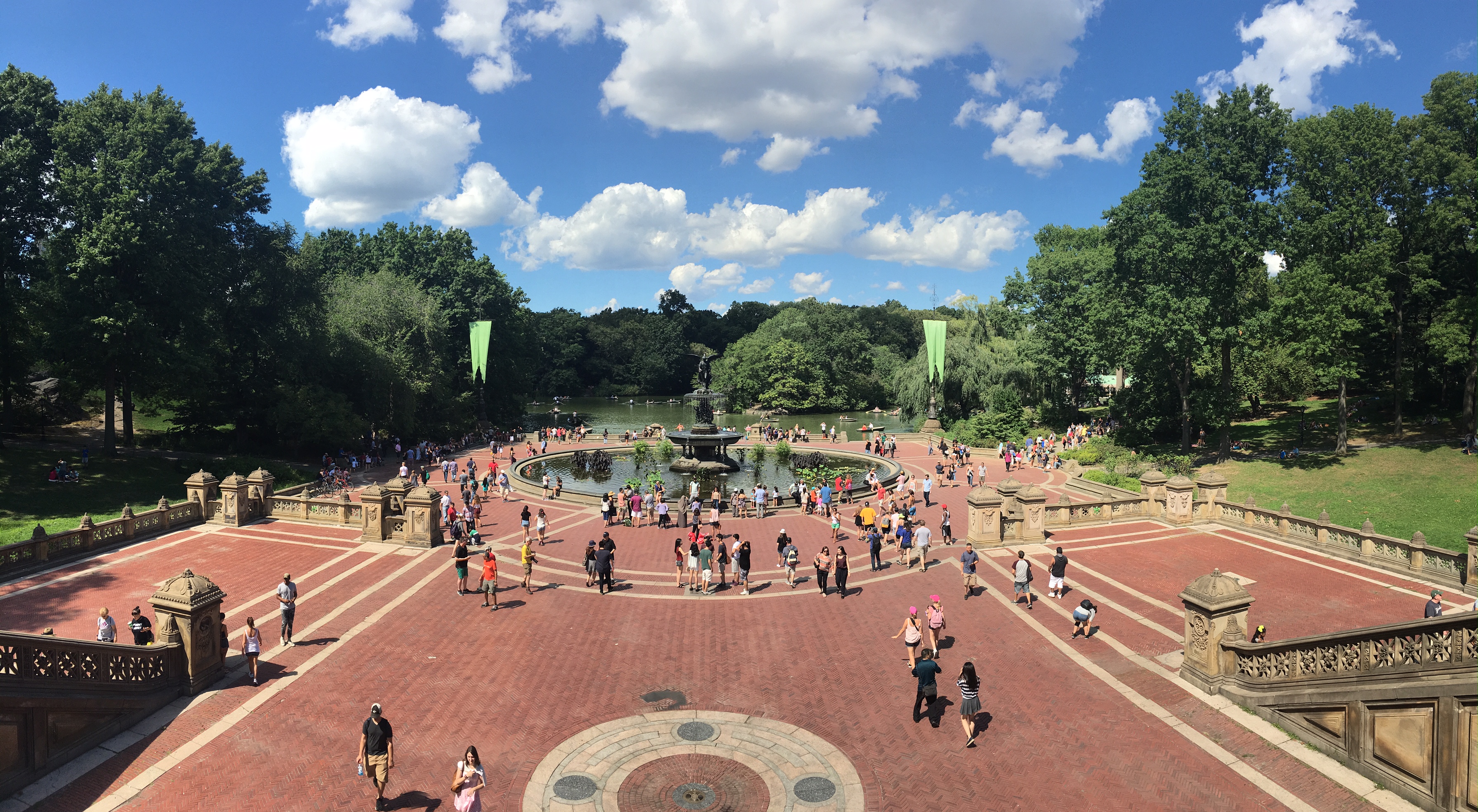 The list of musicals I've seen on Broadway grows ever larger and I've learnt that if you are flexible, entering the Broadway Lotteries for tickets is the best way to save some dollars. I've seen Aladdin, Kinky Boots (twice), Something Rotten, The Lion King, Wicked and New York's equivalent of Willy Wonka's golden ticket, Hamilton. It was a Friday in late January, we were sent home early due to the snow storm about to hit the city that would have skiiers and snowboarders hooking onto the back of cars for rides in Times Square. The city was shutting down and on Saturday morning I woke up, saw the horizontal snow in my window and thought, well nothing is happening today, but what about all the people that didn't make it into the city because of cancelled flights? Surely a few of them were going to see Hamilton on Sunday? I was right and I managed to snap up a reasonably priced ticket to see the hottest show on Broadway... and it was worth every penny I paid!

But nothing excites me more in this city, from the first day I arrived until today than the food. I promised to eat my way through the city because it is an endless treasure trove of cheap eats, every cuisine imaginable and fine dining at its finest. Even when you can't bring yourself to leave your apartment this city has you covered with Apps that will deliver, well anything and everything you can imagine. Food is just one of the conveniences about living in this city that will be sorely missed when and if I ever leave this place.

I was given a list of Downtown restaurants that I quickly made my way through. Now it is all about expanding that list, from Brooklyn to Flatiron and everything inbetween. As much as I adore returning to my favourite restaurants along the way I've recently made a resolution; to eat at one new place every week because you can't have brunch at ABC Kitchen, an Aussie burger at Coco & Cru, a popsicle from PopBar and dinner at Da Claudio's every day of the week. 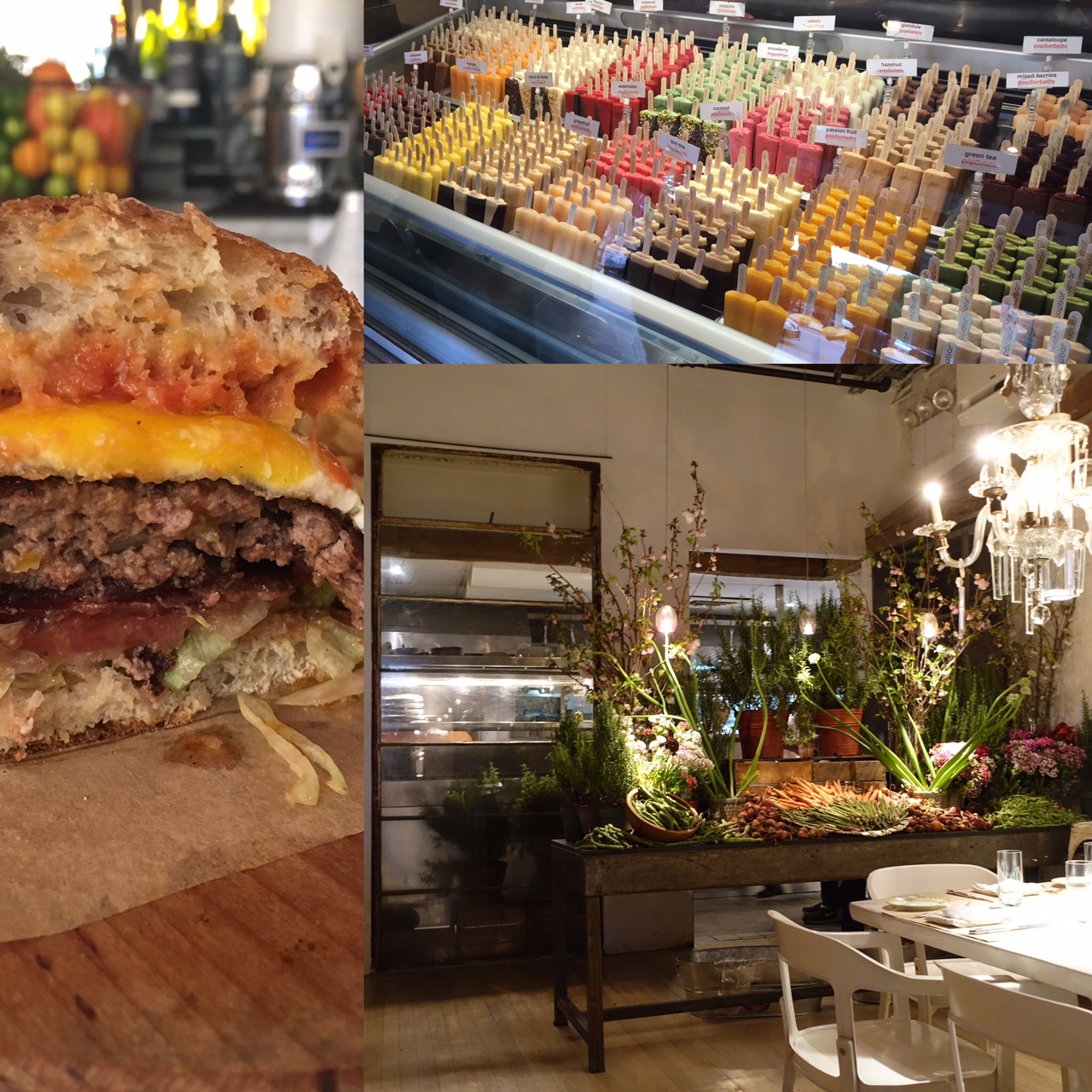 Oh and I have found my spirit foodies (like spirit animals) in the team at The Infatuation. Their crew sees this crazy city exactly the same as I do, so much so that I have to include a quote here because I can't write this any better...

The Infatuation on Summer in NYC:

"Summer in New York City is the greatest. There are free movies and concerts (not like you've gone to one since the summer you moved here, but still), you can bike or walk everywhere (not like you take any fewer cabs, but still), and it's socially acceptable to order a frozen negroni at 11am.

But summer in New York City can also be the absolute f$cking worst. You constantly feel the need to shower, you're certain that every tourist is conspiring to make your commute as painful as possible, and you're constantly assaulted by a haunting combination of sewerage and garbage smells."

Summer in NYC was EXACTLY like that. I would walk out and 30 minutes later I would feel like a shower. I warned all my family and friends that when walking down the street if you see a puddle and can't figure out the source it's dog pee... And wow, does Wall Street smell when it hasn't rained for a bit. There is certainly a less than glamorous side of the famous Wall Street (where I live, hehe) and New York City in general which leads me to the human wasteland that is Times Square. Oh how I wish Broadway and all the theatres were in a nicer area because that is the only reason I suffer through the sea of tourists; the poor choices of food; the screens that make night day; the costumed Elmo's, Batman's and Elsa's; and having a live snake almost hit you in the face (yes, that happened, I'll never be distracted by my phone in Times Square again).

They say if you can make it here you can make it anywhere and in some ways I really do believe it. This city can eat you alive and more than once I've thought to myself, 'this is not the subway to catch.' But if you accept that your pennies aren't for saving, that they are there for you to experience this great city and all it has to offer then New York is exactly like Hamilton: The Musical, a golden ticket.

Five years ago I fumbled through my luggage at Sydney airport, desperately trying to reduce weight in the two…

From Crazy to Lazy