We started driving at about 9am, knowing we had to make it to the other side of the island for 12.15pm. So we drove through a few sleeping towns on our way to our first stop (Nat runs to get a map because she can't remember it's name) Wipi'o which is a viewing point down into a valley with a sheer cliff on the other side. This brings us to our first photo..... 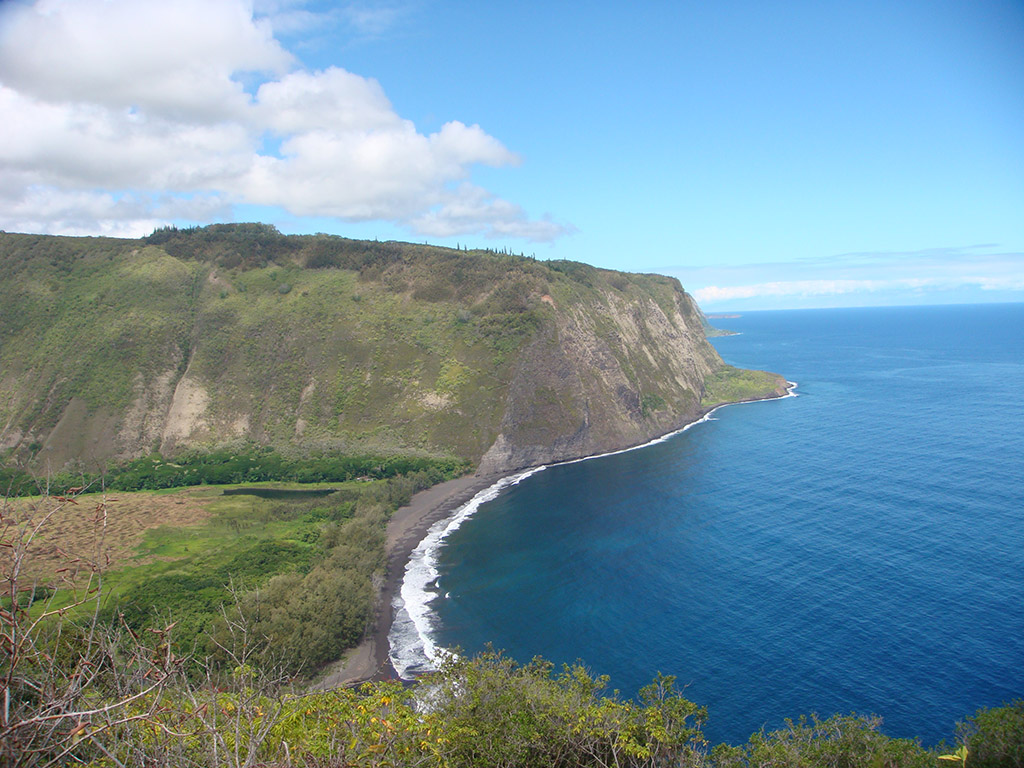 We then got back on the road and drove some more where I found out that the map Four Seasons gave us wasn't entirely to scale, fortunately we had another map that restored Trent's faith in my navigation skills. It was clearly the map's fault, not mine. This brought us to our second stop of the day Akaka Falls. It was quite a short walk from the car, which didn't bother Trent or I because we were both starting to get conscious of the time. As you can see by the below it was a pretty site. 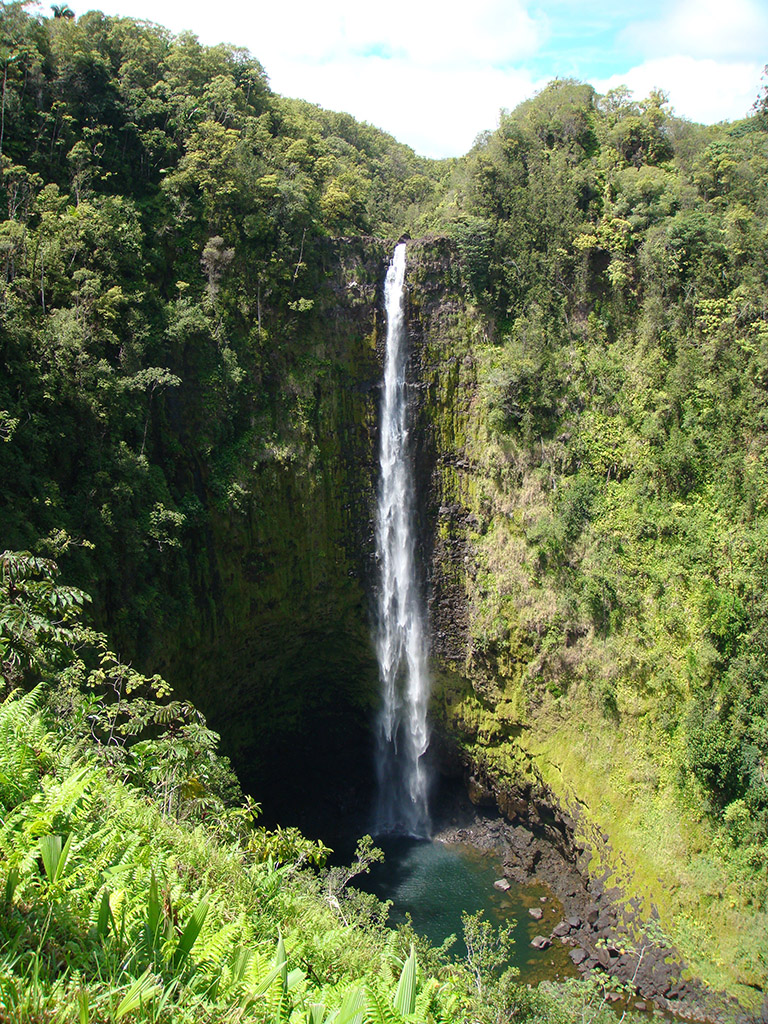 Making our way around the back of the island to the sleepy town of Hilo (the wettest city in the US). We arrived at Hilo International Airport at 12.15pm. That gave Trent and I time to marvel at how good our timing was before jumping on a Helicopter that would take us out to see where the molten lava meets the ocean. This is a site to see, although we only saw snippets of molten lava in the ground at one point we actually saw the sheer speed at which the lava was moving underground as well as two lava flows coming together. Down at the ocean you saw huge amounts of smoke and explosions of the now black lava as it meets the water forming toxic gases you don't want to be downwind from. There were patches of trees that have turned red because the heat from the lava below is killing them. It's an amazing force of nature. The helicopter ride was awesome because as we later found out, we would never have been that close otherwise! 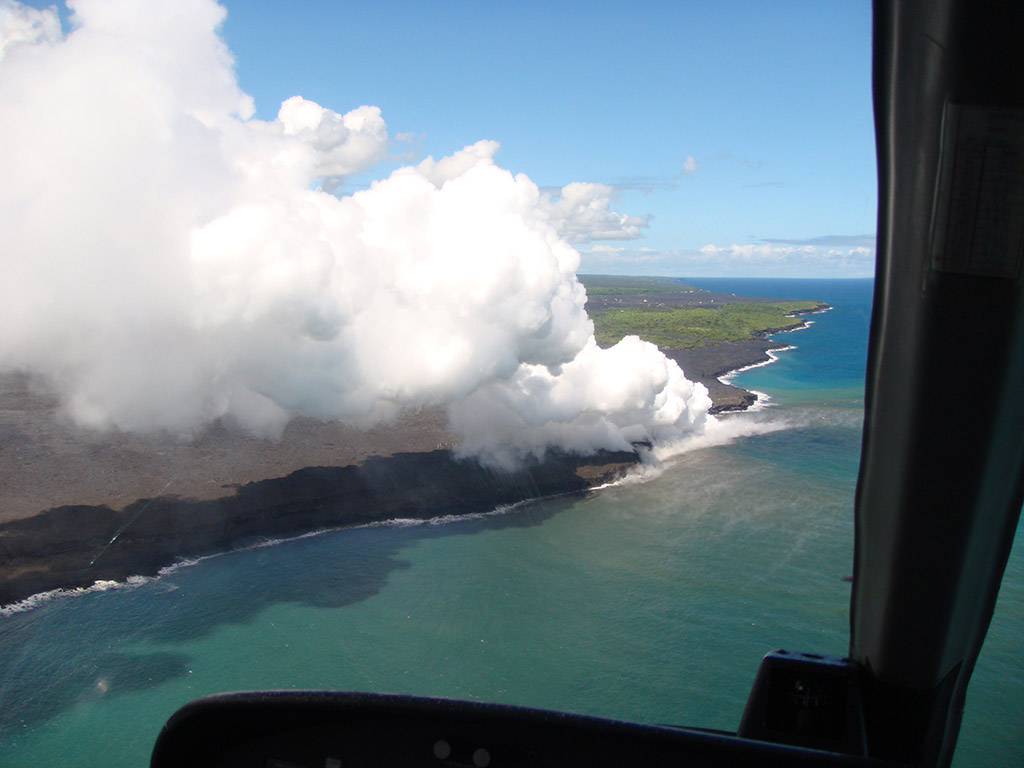 Now before I show you this I must explain, especially to my father, what has happened since we were last here about ten years ago. Recently the lava flow has changed, so where we saw the lava flowing into the ocean is no longer very active. This new lava flow actually falls outside the National Park. So what I'm getting at is we took a detour and didn't head straight to the National Park, we went and saw what's happening in the picture above from land. Also it's important to note that it is at twilight you actually see the glowing red where the lava meets the water (and we couldn't stay for that) in daytime if you get close enough you see the black lava exploding out of the water.... Still very cool.

Funny Moment: When we parked the car we were directed into a reverse park by one of the parks employee. We got out of the car and he said to Trent,

It might have been about 2.45pm, having only opened at 2pm, I thought it was funny, poor guy, is he that bored that he is judging people's parking jobs?

So this is the view from the ground..... 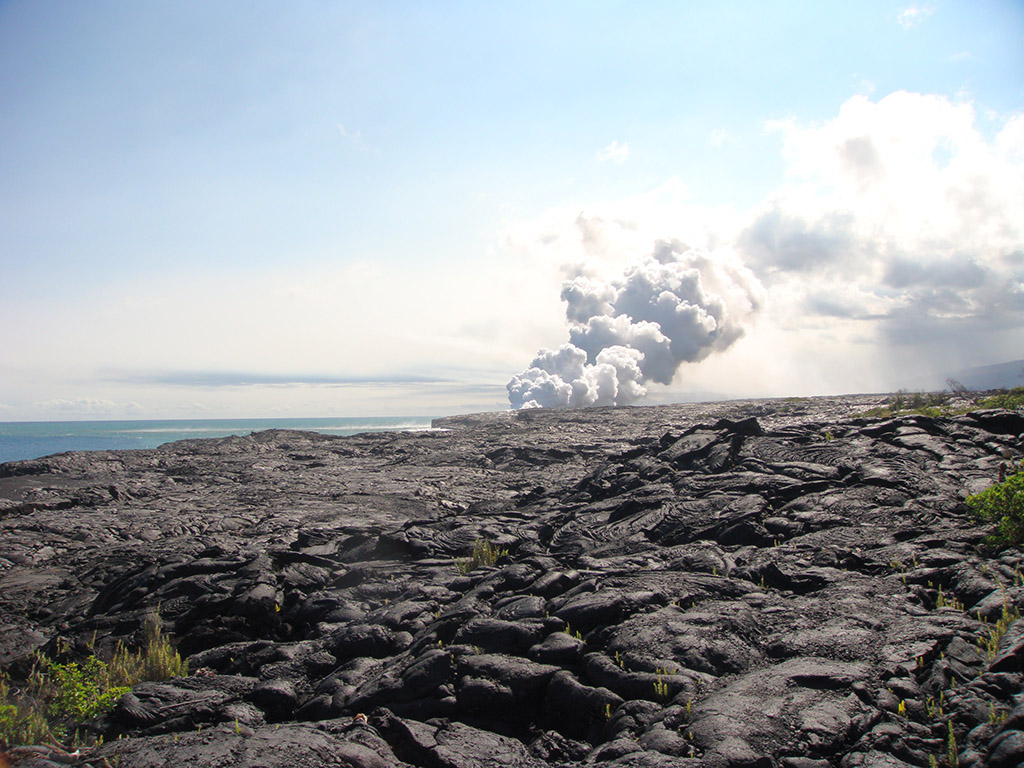 Yes, a lot of volcanic rock to walk across. The lava had stopped over the road. But this is recent flows, well recent being 1986 through 1990. It destroyed many homes. There is this guy that still lives out in the middle of nowhere that can no longer ride his motorcycle across the volcanic rock because it is now too hot. When we were driving in we saw a 'For Sale' sign and I was wondering what on earth was for sale, there was nothing but black rock, but in the distance down a driveway carved in the volcanic rock was a little oasis of trees and in the middle a little house. I wonder how long the 'For Sale' sign has been up...

We then drove again to the Volcano National Park. Now by this stage we were starting to run out of time. It was 5pm, we were just over halfway around the island and we had to get the car back by 7pm. We started driving around the crater rim, knowing that we weren't able to drive down to the water again and we found that a major section of the cater rim road was now closed. At the museum we found out that it was because of some recent (March-April) activity which has basically made the hole in the crater a significant amount larger than before. Anyway, this is the view from the crater.... 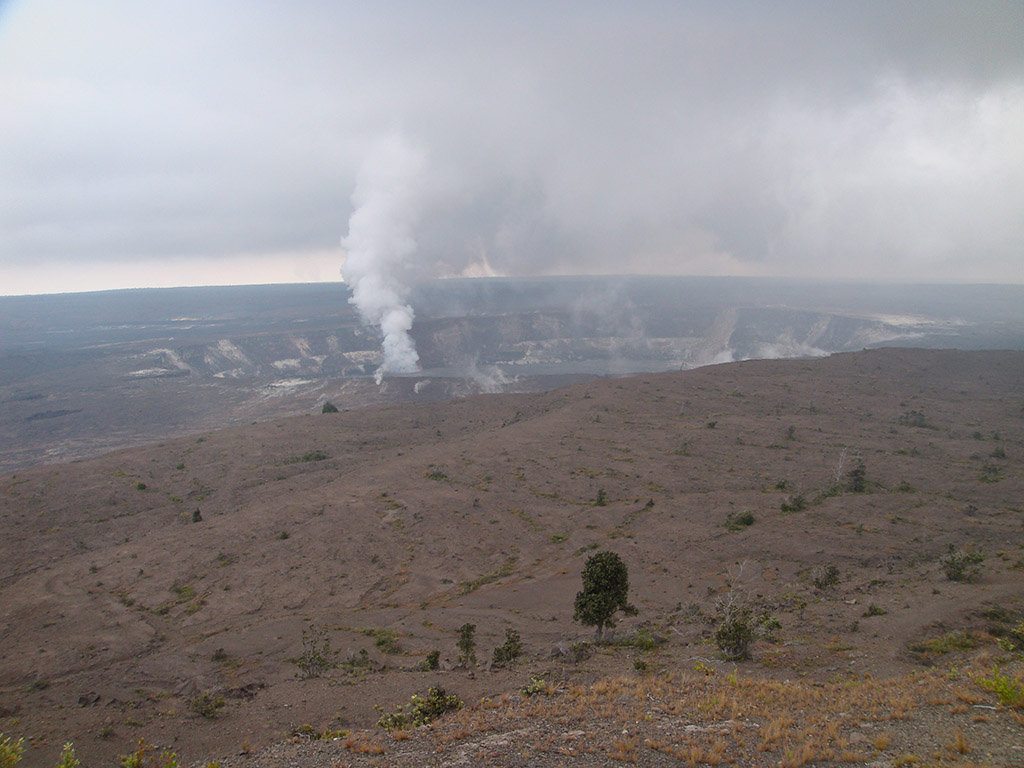 Like something from outer space. The land is SO baron. There is pretty much nothing as far as the eye can see and in the middle hazardous gases spilling into the atmosphere. There was definitely a smell in the air around here. So sadly this was the closest we got to the Volcano because of the road closures, my picture from 10 years ago is still the best picture I have of this area, but I can't wait to do a comparison when I get back home.

So now we were left with long ride home that wasn't the most pleasant journey. For starters we were on a time limit and getting stuck behind leisurely driving locals that Trent couldn't overtake on the winding roads was quite problematic. That and there was no certainty how much further we had to go and the lack of overtaking opportunities for at least 25 miles (yes I am talking in miles now, for the time being) and the need of fuel, Trent was not the happiest of campers. At 7pm we were 10 miles from the airport and our Hotel is about 4 miles beyond that. We managed to arrive at the Hotel just after 7.15pm.

When everything was calm we went and had dinner to celebrate Trent and Sue... Homeowners and Landlords. I had some delicious lamb with macadamia nuts and then vanilla cheesecake for dessert. A beautiful meal but tipping in America... so annoying.

So after this awesome timing in the morning we almost had a massive fail in the afternoon. There was certainly more that I would like to have seen and done, I could have used another day but I stand by my choice, Friday was going to be a LAZY day hanging around the Hotel.