My chair was right underneath one of the arms for the shade and the birdies liked to sit there. I should have known something was up when I flipped over the cushion to sit down.

So I changed seats and not five minutes later the same thing happened to Mum. It was pretty obvious what had happened but our waiter was an ass in every possible way and did nothing, then charged us for three full buffets at 53 Euros each when all Mum and I had was Fried eggs off the a la carte menu and a coffee. He was not in our good books, neither were the cute little birds.

Jonno met with us after breakfast and we headed by ferry straight to the Peggy Guggenheim Collection. And yes, I would loved to have had a house like hers on the waterfront, the art aside (which was amazing) the house would have been beautiful to live in. So this is the first modern art museum I’ve been in all trip, vivid colours were back, abstract art, Picasso’s craziness and almost a whole room of Pollock (because you aren’t a modern museum without that one =S). Jonno and I personally liked the Dutch tourist who covered up the dick on the statue outside with their 6 Euro booklet… Adding to art.

Back to S.Marco’s Square and Jonno left us for a while, we needed to go back to the Hotel to make sure we didn’t need to checkin online for tomorrow’s flight. After a drink we were back in the swam of locusts (I’m sorry I meant tourists) being ushered around S.Marco’s Basilica.

This city is strange, you can watch as the tourists swam in of a morning, boat after boat after boat. You can see them following the leader around the attractions and some of the laneways but take one wrong turn, end up somewhere you weren’t meant to be, or walk into an attraction that no tour group has time for and the place goes next to silent. Of a night when all the people exit then the city is yours again and you can have a good shot of counting the people in S.Marco’s Square accurately.

This is what happened when we entered Doge’s Palace. We didn’t feel at all like we were at the mercy of the crowd. Free to walk around at our own pace, which was quick, very quick. Personally I liked the Ballroom and the all-in-one city/state building. Your courthouses with your prisons across the bridge of sighs, it was very handy. I liked all the tourists taking pictures of the Bridge of Sighs even though it is surrounded by scaffolding.

Actually that’s a gripe that in my haste to write these Venezia blogs I’ve forgotten about, you can barely take a decent picture here right now, everything is being held up by scaffolding. Now I know its there for a reason but it annoys me that it is used to plaster advertisements all over the city. I don’t need to come back here but I feel I must because I missed something whilst focussing on the latest Bvlgari ad.

Back to the Hotel and another quick change later Jonno and I were heading over to the Venezia Casino. Home of the 67th Venice Film Festival which happened (by a very happy coincidence) to be opening tonight. My dear friend had done his research too and managed to get us tickets to the first public screening of the Festival, but first we needed to check out the action. The red carpet and all that. Jonno gave me his bag and jacket and went off with his long lens to take pictures. I was stuck in the crowd, trying to see who they were screaming about but with little success. 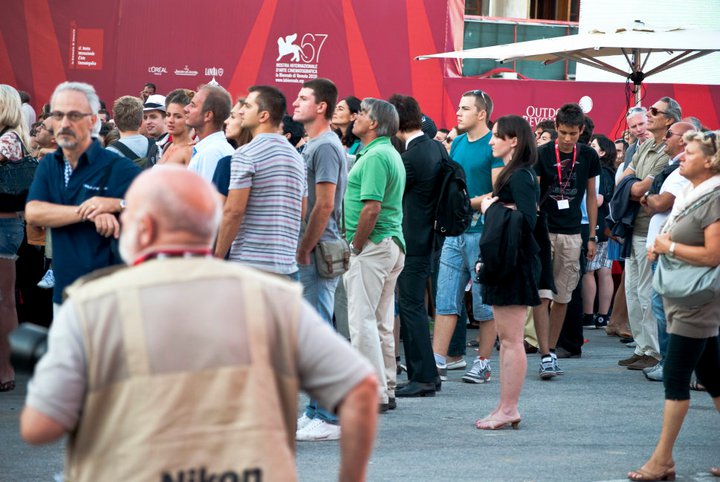 I did see some pretty dresses, this chick that loved to throw her hair around and spent WAY too long on the carpet and a lot of penguin suits. It wasn’t until Jonno started going through his pictures that I saw Tarantino and Natalie Portman, alas only in picture form. Here's a picture of Jonno and I, because I bet you would much rather see a picture of us than Tarantino and Natalie Portman 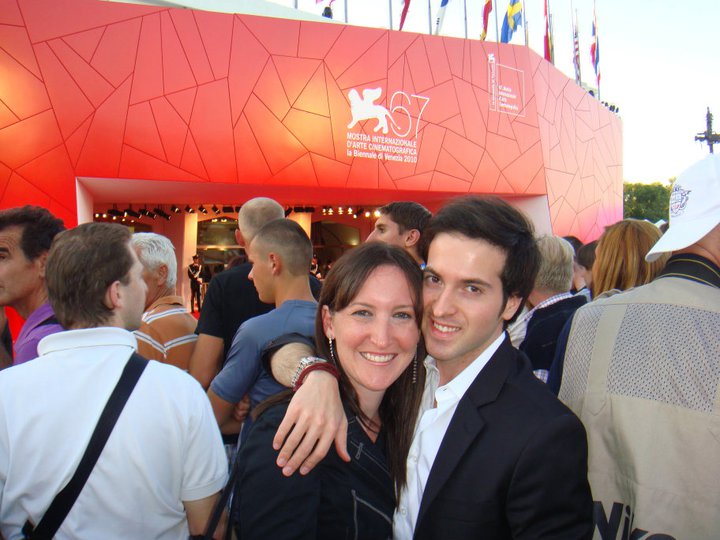 With them all safely inside the Casino we had about an hour to burn before our screening. Food time, but besides the Panini stores from the Festival there wasn’t a lot of food around, so we walked for a bit, soon stumbling on a pastry shop that served pizza slices and sweet goodness. Sold.

They let us in! YAY! It’s a circus tent =S Can’t say I was expecting that until I was standing outside it. It is a huge temporary cinema setup, easily fits about 1000 people and I think they overdid the sound a bit because in parts the music was to the point where it was too loud. The movie was Black Swan, done by the Director of Requiem for a Dream and starring Natalie Portman. It was a bizarre film about a ballet company putting on Swan Lake and the Swan Queen basically descending into madness. There was a stunningly beautiful part at the end of the film where as she turns she grows wings and when she stops she is normal but her shadow is that of the swan.

But why go for one movie when you can have two? The opening night for the public is always a double feature and after about 10 minutes you were back inside for the next one. But we were tired, it had been a LONG day, we stood on the side to decide if we were staying or leaving and all I remember was this war scene turned into a crappy martial arts film (the martial arts were brilliant though). I didn’t want Black Swan to be tainted by association and as much as Jonno wanted to stay we left about 5-10 minutes into the film. It was already 11pm.

A quick walk around to see what was happening at the main venue (nothing) and we headed for the ferry. I heard and then saw it was there so we rush to catch it. There was a guy checking that you were scanning the card at the entrance to the dock. My card worked, Jonno’s did not. I had to watch the ferry leave as Jonno bought a ticket. The guy giving me the look of are-you-getting-on? I shrugged and my feet cursed Jonno for his apparent use of the wrong day pass. Fortunately that was not the last ferry, another came 15-20 minutes later and shortly after we were back on the other side. We finished the evening with Gelati and photos in S.Marco’s Square (everything else had pretty much closed). It was one crazy day from start and finish and I was glad to finally find my bed (I know, I’m glad to find my bed every night, but this one in particular).

By Boat, By Air