For starters one cannot predict the weather here. Yesterday and last night was cold, like cold in my jumper cold. The converse came out of the bag for dinner and everything. So we were prepared for the worst today but after a quick breakie stop at a local cafe we began to realise what we had prepared for wasn’t happening. It was hot again, not uber hot just hot enough for me to wish I was wearing my thongs.

But powered on we did, weaving through the streets of Venezia to the other side of the island to catch our ferry. Now this is where I am going to say that maps of Venice, street signs in Venice… suck. The map that was given by the Hotel has no street names, the scale isn’t accurate, half the streets aren’t on it… Well you get the point. But kudos to Dad, he knew where he was going and did not look at the map once. We began to question him but he wouldn’t sway and low and behold he found water.

Now Dad was ahead, looking pretty smug. The hey-I-was-right-and-you-were-wrong look, standing by the ferries in the water. The rest of us walk out of the lane and I was the first to notice our little problem. We had found water and ferries, but we were not 100 metres from our Hotel. WE HAD DONE A LOOP AND ENDED UP EXACTLY WHERE WE STARTED! And it was all Dad’s fault. Mr-I-am-awesome-at-directions. BRILLIANT!

But did Dad realise what had happened? Oh no, it wasn’t until we started laughing, pointing out this wee little problem of ours that he finally clicked. Yeah, twas a very funny moment. This was good though, I could go back to the Hotel, get changed into thongs… YES!

So take two eventually happened and I was navigating this time around. I got to the middle of island confidentially but then hesitated on a left or right hand turn. Dad led us right (low and behold it should have been left) and a little while later we were lost again. Every time we saw a church or piazza we were trying to find it on the map and eventually we found water… ON THE OTHER SIDE! Just no where near the ferry and to go north we had to go back inland. Oh it was an epic start to the morning. I don’t think we saw the ferry until around 12 and we had begun our day at 930am.

First stop Murano Island. The one that makes the glass you see EVERYWHERE around here (especially on Venezia). Walked into a glass blowing demonstration, a couple of trinkets bought by Jonno, into the city square and by this time I was STARVING having only eaten a doughnut for breakfast. One Murano bead later (big spender) and the disappointment of finding a shop closed when Mum and I liked something in the window we were off to Burano.

Burano is to Lace what Murano is to Glass. Very pretty but it was (and possibly still is) an old fishing village where the women paint the houses in all different colours, bright, really bright paint. So our challenge for the day was to find a house that matched with what we were wearing. Since Dad was in a multi-coloured check and Jonno was in grey this was Mum and I... 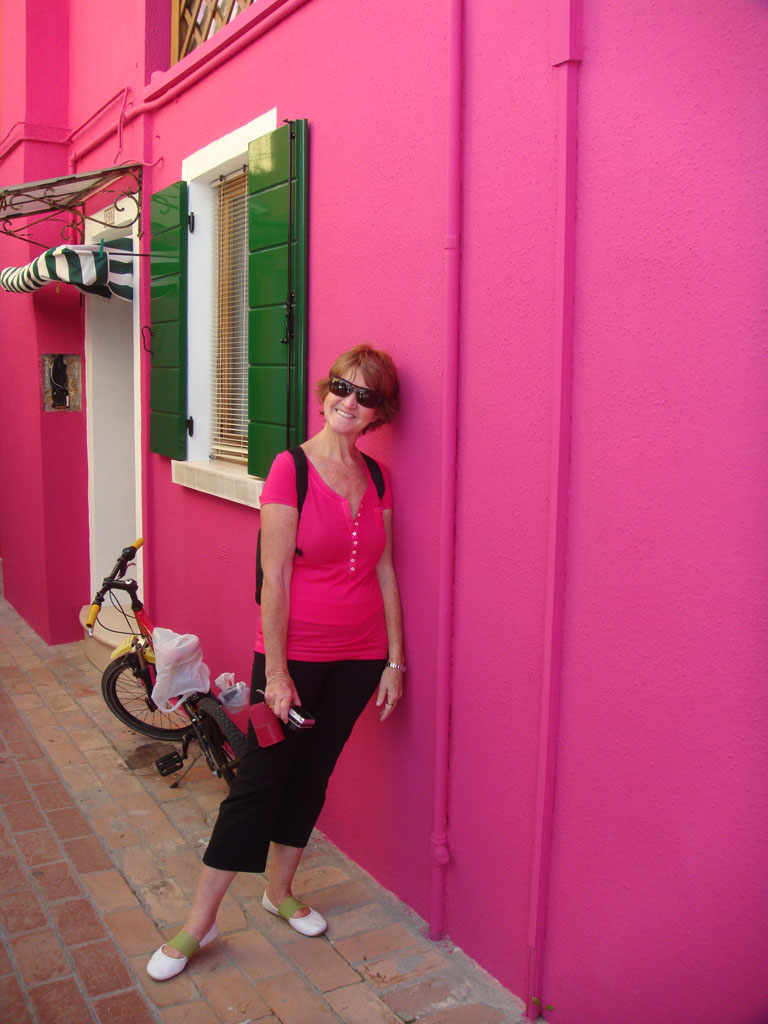 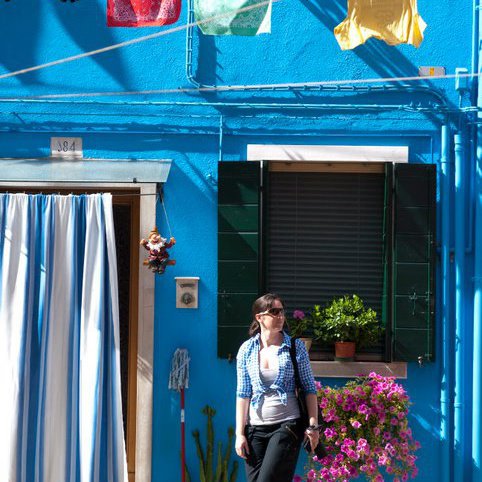 Ferry back was uneventful. I think we all kind of fell asleep at some point. Jonno brushed up on some of his french when trying to explain to two elderly ladies that the ferry doesn’t go to S.Marco, they have to get off now. Finding our way back to the Hotel only involved one wrong turn this time, and that was because we walked into a piazza and there were two signs for S.Marco, the one behind us that we didn’t see was the right direction, the other started what could have a vicious cycle that ended back at the Ferry. Lucky we caught that one. Funny though how we didn’t see ANY signs this morning and the elusive Hospital that our Concierge talked about had signage everywhere!

Now as if this day wasn’t jammed packed enough we thought of making the most of our Ferry pass for 12 hours. We had decided to go to Lido for dinner, that was before we found an invitation in our pigeon hole at the Hotel inviting us to an exclusive Rooftop Party to celebrate the opening of the Venice Film Festival. The party started early, but Hotel guests were allowed from 930pm. AND we were going to try and fit in a Gondola ride? Suddenly the night was insane.

Out and about at 7 and after the first Gondola guy didn’t want to negotiate we moved on planning to do a Gondola ride (because you have to if in Venice) the next morning. But it was quiet and twilight, we thought we would give it one last shot in another area. 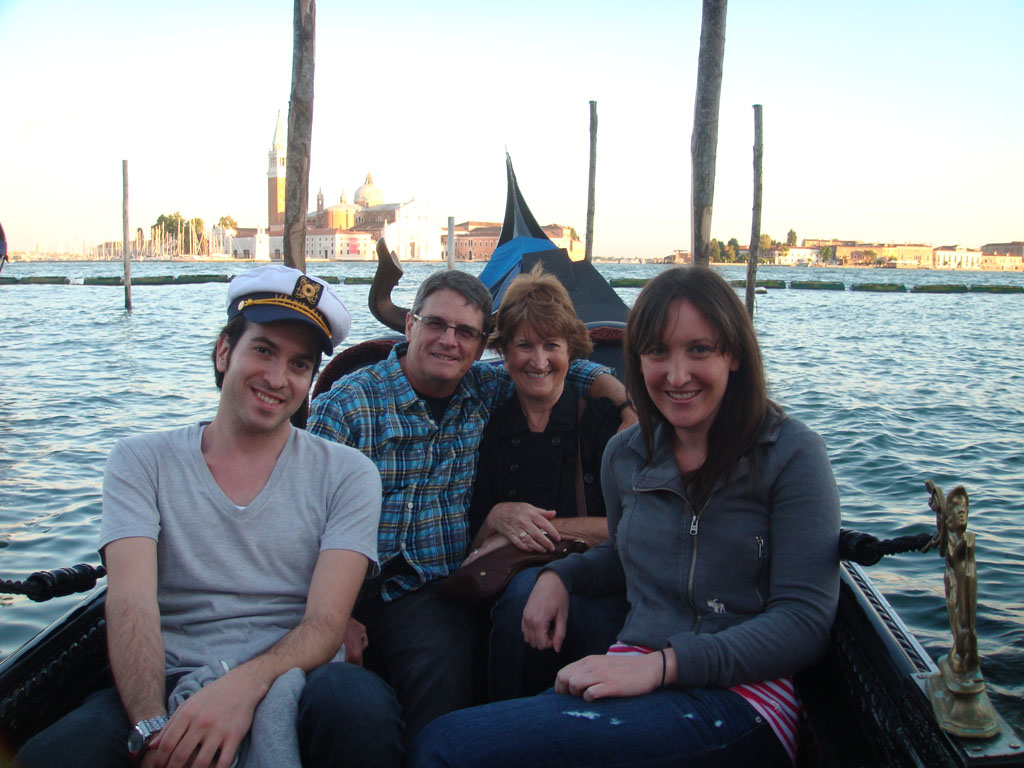 So cool. The guy took us into the small canals to the Grande Canal, under the Rialto bridge and back through the smaller ones to near our Hotel (and conveniently the ferry to Lido). He gave a little history tour as we went and the four of us had a great time.

About the only thing we saw in Lido was the main street and the restaurant that had been recommended by the Hotel (on the main street). The pizza was yum but not as good as the Brick Oven experience, Buffalo Mozzarella with Cut Tomatoes and Basil. They replaced the stem of the tomato with basil leaves which looked quite effective.

Back to the other side of the water and the DJ was pumping on the roof of our Hotel, we could hear it from below. I smiled knowing that soon I would be up there too. After a quick change for everyone we were on the roof, most people had left but the drinks were still being served. We had managed to get Jonno into the party too which was awesome. The dancefloor was looking a little sad with only three girls dancing, Dad said I was allowed to dance if I wanted to. Jonno and I both confirmed that it looked pretty sad, so we grabbed some free dessert (chocolate mouse with raspberry coulis) from the buffet and a drink and hung around admiring the view.

How many people can say they were at a party with free food and drinks on top of a Hotel right next to S.Marco’s Square in Venice? How surprising it was to have this wonderful experience and if it wasn’t for being up there that night we would never have known that that area is where breakfast is usually served. At around midnight we made it back to the room. I don’t remember turning on my computer.