Too long my friends, too long. 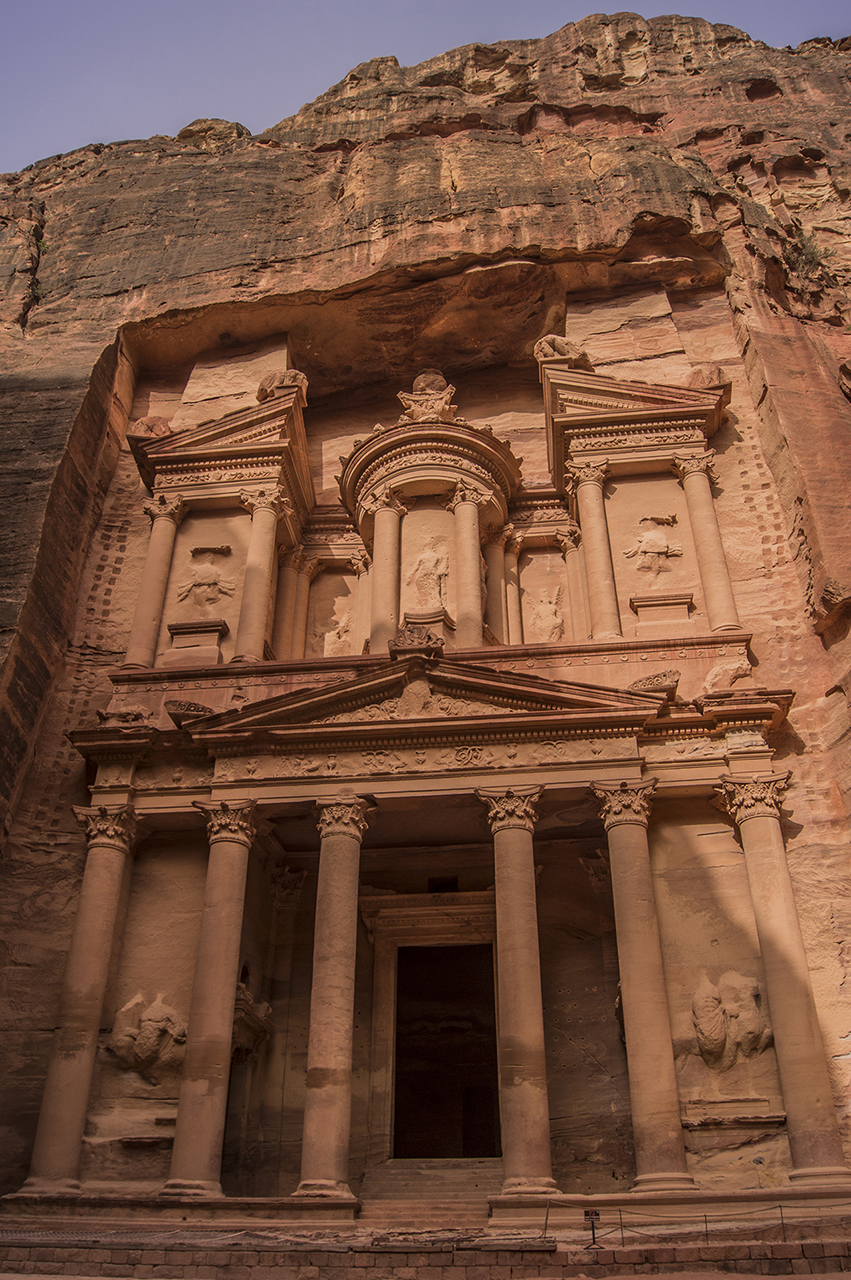 But Petra spans well beyond the Treasury building, an entire civilisation lived in the city of caves. Our great tour guide for the first part of the day, Ali, took us off-the-beaten-track after the Treasury into a 'No Climbing' area. He said if your friends with the guards it is never an issue (he was correct) and so here we are diving in and out of caves used for homes and tombs (and sometimes both) looking down onto the main city strip. One such cave even had a skylight :) 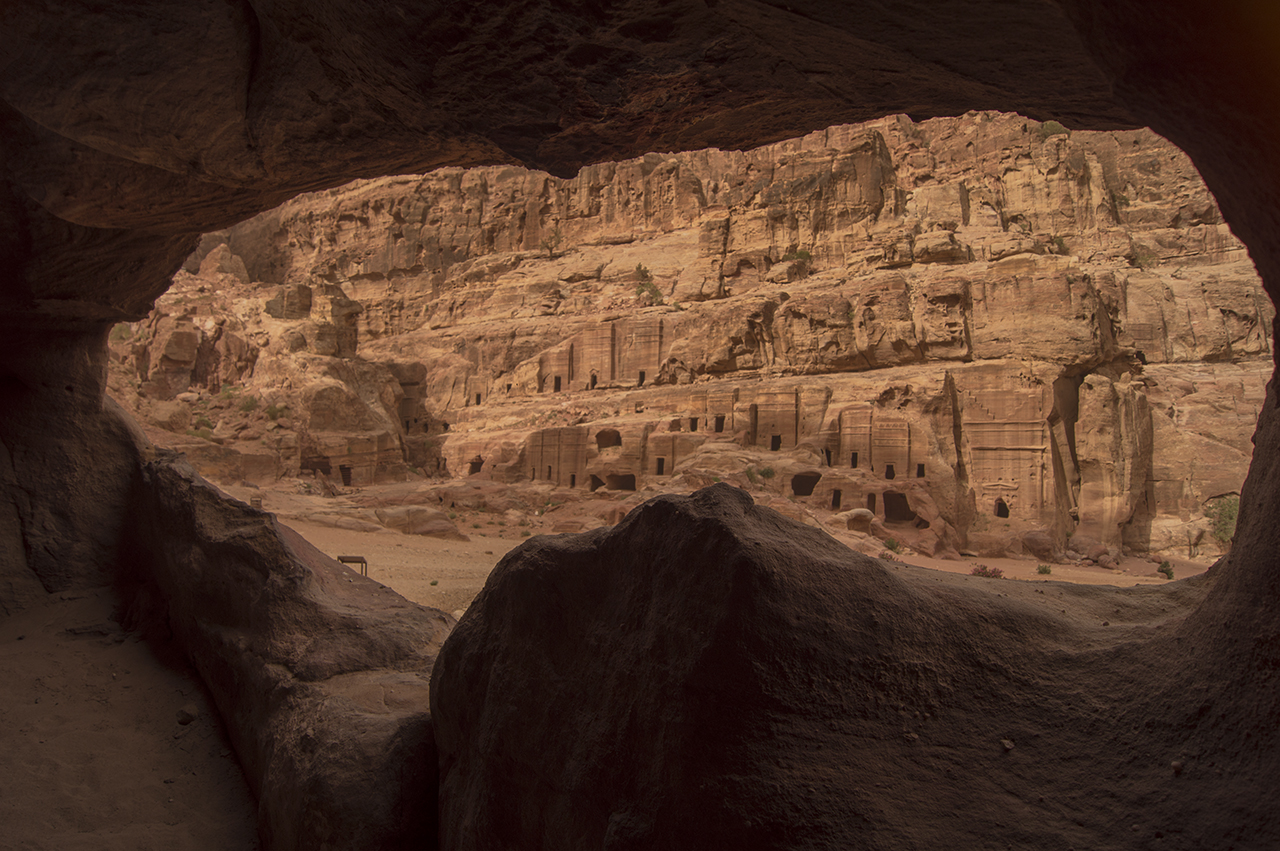 On our backcountry travels we were introduced to a local who goes scavenging through the caves to find artifacts. Dad and I held in our hands coins from BC. Before Christ! Then he wanted money from us to take a photo, or to buy them. We managed to take a photo for free with the assistance of our guide but gave the coins back to the man.

Still in the backcountry we stopped at the most amazing, naturally coloured cave home and tomb. See for yourself... 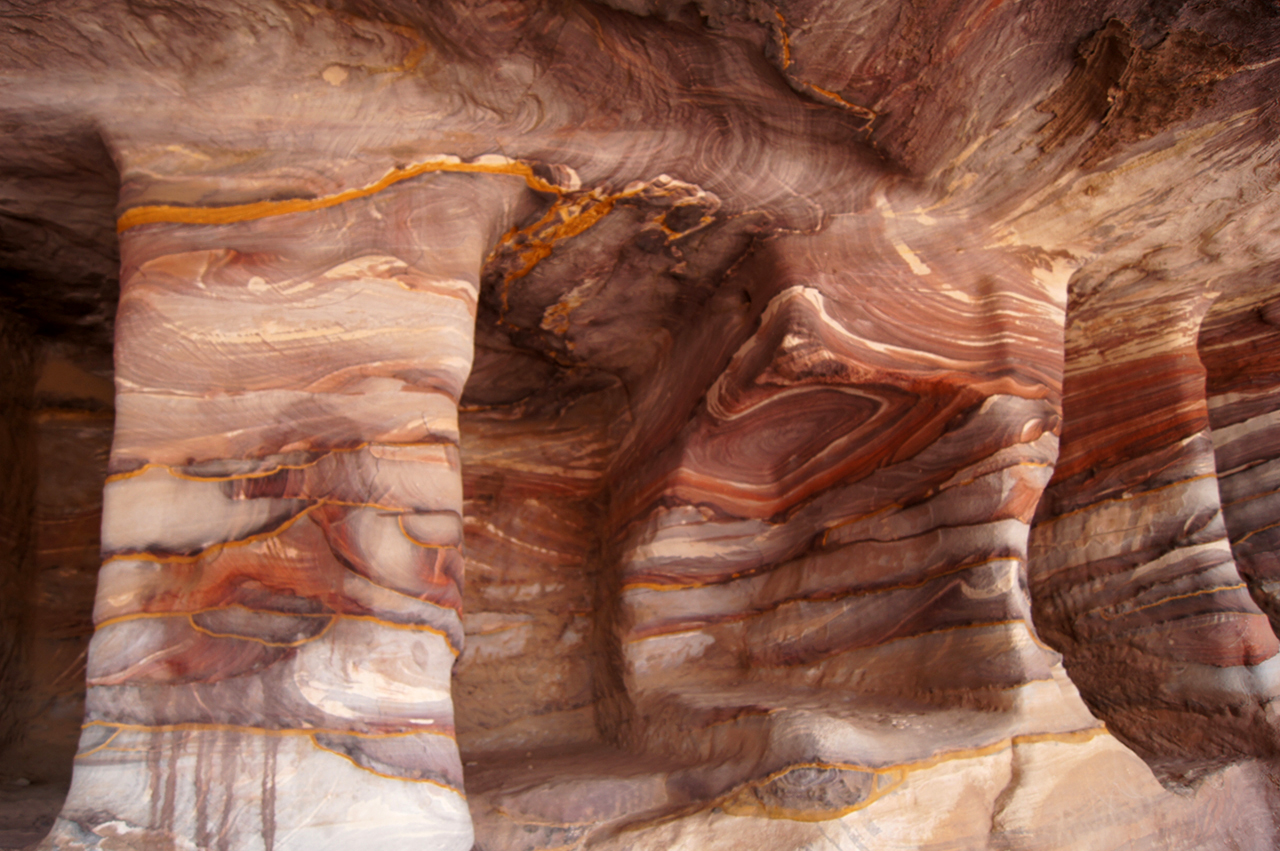 One angry and very loud donkey later, across from the Roman Columns, we were saying goodbye to our Petra tour guide who had taught us so much in such a short space of time. It was now only 930am, the rest of the day in Petra was ours. I knew where I was heading, I just needed to convince the others.

The Monastery. 800 steps up after walking approx. 5km already in the morning. The perfect plan was in place until the day before, Mum would relax and Dad would try and follow me up the steps. But we didn't factor in the sleazy. Al (Jordan tour guide, not Petra tour guide) made it very clear the day before that we had to stick together. Fear of God was placed in us all as he went into detail on what scams are running in the Petra area. By the end of the convesation we knew the going rate for a chariot, donkey and camel, how the 'Casanovas' try to separate the women from the men. We also knew that the Monastery was an all or nothing thing.

I was set, Dad was set. In ways that can only be described as taking one for the team, Mum agreed to give it a try. To say it was tough for Mum would be an understatement, it was getting hotter, she had to stop often (preferrably in shade and with a rock to sit on), and more than once she believed she wouldn't make it to the top. This would be where the tears fell in Petra. I became the scout for the team, going ahead, seeking shade, sometimes back-tracking so Mum and Dad would know what's up ahead. That was until I was so close to the Monastery that I could taste victory, reserving a shady rock with a killer view for Mum's arrival. Note: the first picture of the blog is taken at the Monastery. Slowly and surely wins the race and a few minutes later Mum turns the last corner of the trail, sees me, sees the Monastery and all the hard work became worth it. So proud of Mum!

And just for some perspective on the elevation, this was taken about 15 minutes downhill from the Monastery... 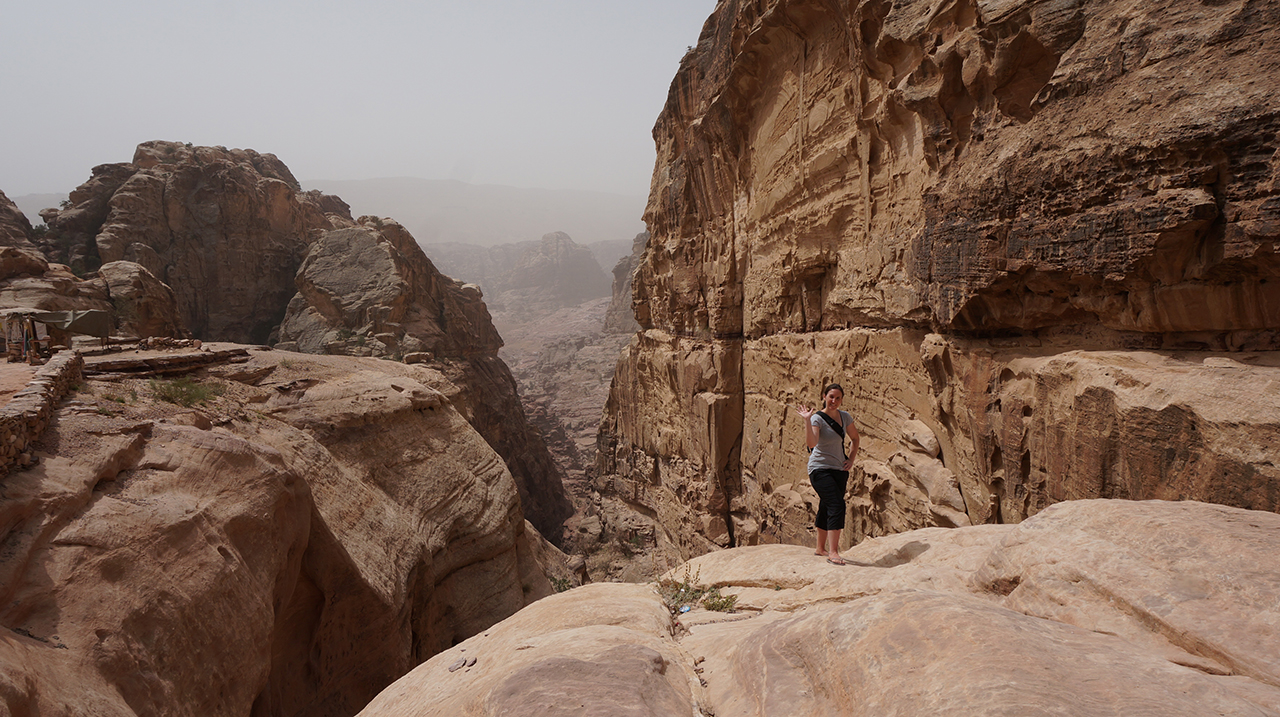 With the Monastery conquered and a cold drink later we made the slightly faster trip back down the mountain. We all agreed that with the time left in the day making our way back to the Hotel (which was conveniently across the road from Petra's entrance) would not be a mean feat at all, in fact, the worst of the day was over (that being the Monastery). WRONG! Factor in uphill, blaring sun that pushed the temps above 30 and only scattered shade and that 5km back to the entrance and it almost tipped the scale into brutal punishment.

In this heat there was no way I'd wear enclosed shoes, so I survived the entire day wearing Havaianas (because how easy are they to wash?). My feet bore the brunt of the (at least) 12km we hiked. I guess I wanted Petra to leave its mark on me and I on it. And it did. I was so mesmorised by the view walking back that I miss stepped and a nasty rock took a chunk of skin off the side of my big toe. The blood quickly pooled under my toes as thoughts pooled in my head.

Crap.
My feet are filthy.
Still 2 hours from a shower.
Clean... Sanitise.

That last one came in the form of alcohol based, antibaterial hand gel (with moisturiser) from Mum's handbag statsh (along with a band-aid). I knew it would hurt but I wasn't expecting the fire of the sun to light up my toe. Suddenly I was the family member asking for an extra couple of minutes before moving on. 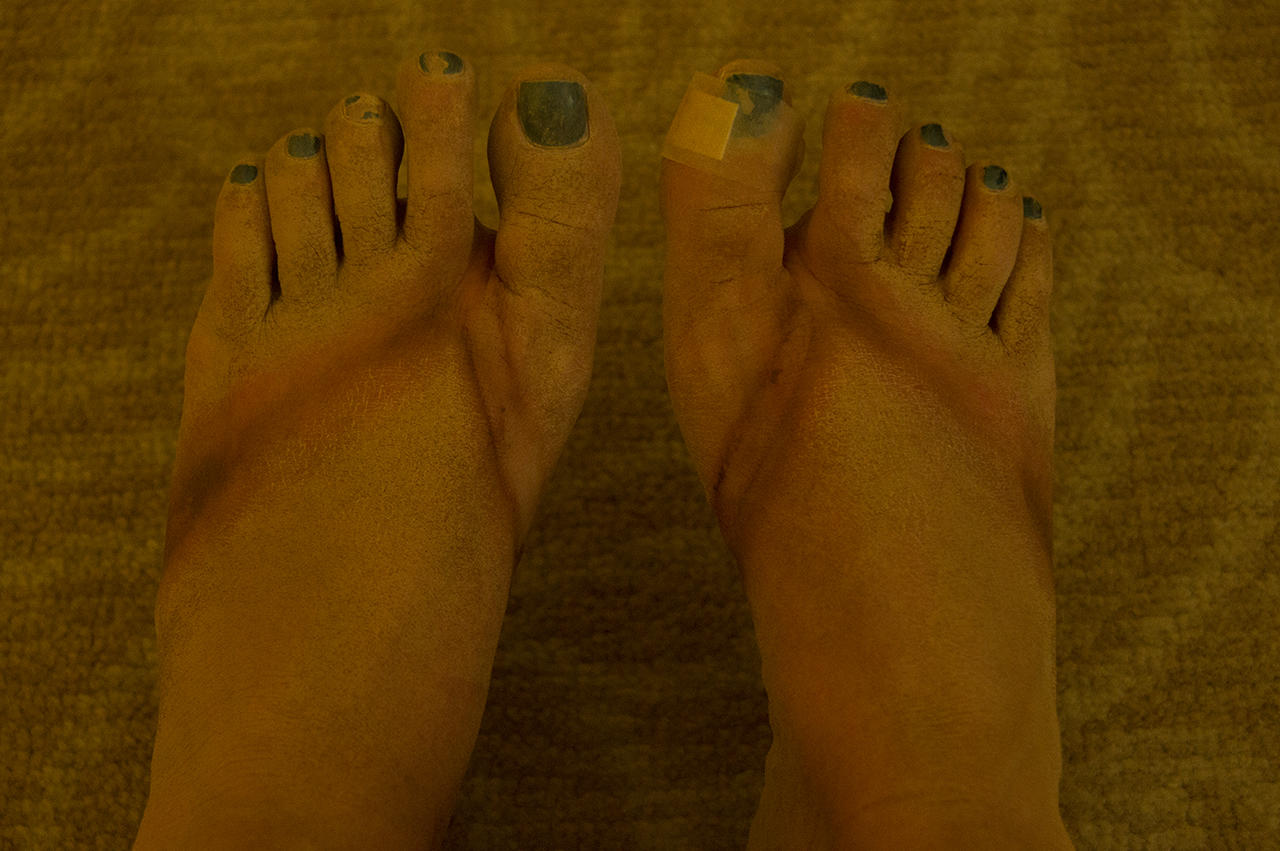 Petra left one hell of an impression on everyone, Mum and Dad likened it to Machu Picchu and I once again likened it to nothing. It is a must see in everyone's lifetime and I whole heartheadly agree with Al (as in tour guide of Jordan, not Ali, tour guide of Petra) when he said:

"I would love to travel back in time and find out how they lived." - Al

And just to throw in one more awe inspiring piccie, this is the view from the Siq (narrow gorge) as you come upon the Treasury. Too awesome for words: 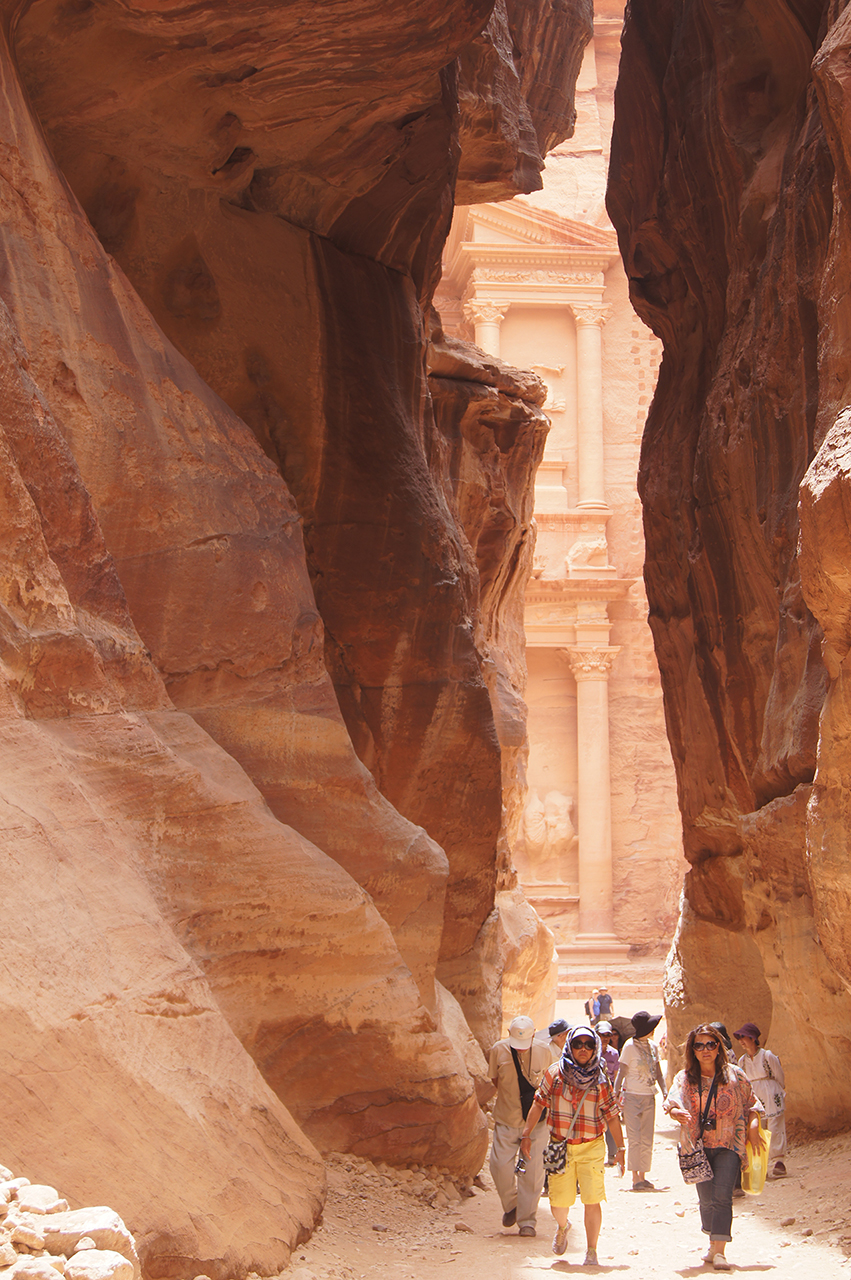 There wasn't nearly enough time to recover as we were heading to a Bedouin camp for dinner. We were tired and even before our arrival they had mishandled a simple request: We were taking a cake to celebrate my birthday and they called the tour operator who questioned why with our tour guide. It's a cake people, you still make dessert, there is just as much chance of us getting food poisoning from your food as it is from the cake.

So we get there to the camp and we are the ONLY people there (Al had warned us that he rarely sees more than 5 guests at this camp). Anyhow, we bought our own wine and asked for glasses, next thing we know the tour operator is back on the phone with Al questioning why. Wine and cake people, wine and cake. It all became very clear a little while later when Al told us that the tour operator was also the owner of the camp. No wonder we are here with more friendly service staff than the three of us!

Anyhow, the food was delicious. We were taught how to make bread which was a little bit of fun and had our stuff of chicken and rice. When it came to dessert we decided that without Al there to share the cake with us it wasn't the same so we postponed, eating the camps coconut dessert instead. Happy Birthday was sung, the staff pulled me up for a dance, they tried to get grumpy Dad to dance or sing (he did neither), so I sang very briefly, they sung and by the end of the night there was even a marriage proposal (joking one of course). So it was fun, just would have been better if there were more people at the camp and they had been more accommodating on the wine and cake.

On the road to the Monastery

Playing rap music whilst riding your donkey does not automatically make you the coolest person on the steps. It is a tourist deterent, or perhaps you are aiming for a niche market.

Watch your footing, watch the steps, watch the donkey poo and remember that last one becomes decidedly more difficult the more people and donkeys trek up to the Monastery. In other words, more avoidance necessary on the downhill stretch.

1 dinar for everything still does not make me want to buy anything you have to offer.

Not all walking surfaces are created equal

To walk in Petra one must understand the finer points of desert surfaces. Small rocks in sand are greater than sand but not as good as a rocky surface. Rocky surfaces cannot complete with Roman pavement which is then trumped by the Swiss made pavement.

Rubbing Salt on the Wound

An evening on the Rum