So, down to the last few hours here in Europe. Just over four weeks has gone by and it was almost time to start our extended journey home, but before that we needed to have one more last swim in the Four Seasons pool, it’s just a shame that after all the good weather we have had that the clouds would sprinkle on us then. It’s like Ade said back at home though, the one place you want to be when it starts raining is in the water, and we were.

Eventually it was packing time and just as we are going through things a sms from Mr Jonno appears. He is grounded, there is a strike for planes and trains in France and in London. CRAP. Are we going anywhere today? Will we have to spend an extra night in FS Provence (I wouldn’t complain about that but now in hindsight that would have been a DAMN shame). Quickly Dad was on the phone to Concierge to check and FORTUNATELY (though there were no guarantees until we were on the plane that because we were flying overseas direct things were still in operation for us. Unlucky for Jonno that he had to spend an extra night in Nice, missing out on Fashion’s Night Out in Paris.

Start Rant
Nice airport’s security is the slowest, crappiest I’ve been in for a VERY long time. The girl in front of me was snogging her boyfriend whilst we waited in a line that didn’t move, she also didn’t believe in deodorant I guessed from the smell (and the French Greenpeace sticker on her laptop). In front of her was some drunk old French dude who’s eau du toilette was eau du alcohol (what the hell, it’s two in the afternoon). And that my friends was before another old French dude decides to push in front of us and take his sweet bugger time taking of his jacket, taking out his coins, taking off his belt. He had pushed in 10 minutes ago and we had stood in the line all twiddling our thumbs, you would think that he could have been more prepared.
End Rant

Then my belt looked like a snake in my bag (I saw it on the screen and thought ‘that’s pretty funny’), got a few questions about it but the guy was happy to let me through… Do I look like a reptile smuggler to you? Apparently not. Good to know. After that episode we demolished the remains of the pringles and just as I buy a cola calipso from the store the place decides to board so here I am trying to eat an ICE ice cream as quickly as humanly possible only to find out that they were boarding from the back and we were in the last section. I was reminded by Mum that someone always has it worse and when I thought of Jonno spending an extra night in Nice I was glad to be on my plane.

I was not glad at the space on the Airbus A330. The TV screen was in my face and that was before the seat in front was pushed back. I got my own revenge a few hours later when they turned off the lights and I was reading. Turned on my light and because the guy in front had his seat so far back it shone directly onto him. I don’t think he liked that.

The plan was to sleep. Like that happened. I was coked up (the Cola variety and not the other) and ready for something to happen. It was a bitch I was stuck in a plane seat because if I’d have had some decent space I would have been bouncing off walls.

I didn’t write this in an earlier blog, blame the fact that inevitably when you try to remember everything you tend to forget something. When we were flying into Dubai on that uber long trip from Sydney out the window we could see the city, towering skyscrapers everywhere contrasting against the flat desert and then you double take. You see Babel (I’m sorry I mean Burj Dubai… crap I mean Burj Khalifa) towering over everything. You wonder if what you are looking at is possible, is real. It’s staggering and that is just a thought from the plane. At 1230am, taxing to the terminal, there it was again, in flashes, you see you couldn’t see the top 100 floors or so, it was like all the lights were out, but every now and then the lights would flash up like a sign (I’m here, planes beware) before disappearing into the night’s sky again like a magic trick. Trying to train yourself to look, to believe how high the damn thing is, is something that will take days. Even when driving through the city to our Hotel the flashes and glimpses were skipping beats. As we drive along the 7 lane each way highway surrounded by huge building after huge building my first thought was ‘It’s like Vegas - Minus Gambling and with significantly less alcohol… FUN!’ And no people that FUN is not sarcasm as you will find out over the coming blogs.

We are staying down in the Jumeirah complex, the Beach Hotel to be exact. We arrive at around 2am, towels and oj offered as we go through the extended version of checkin, but the guy was so friendly, his name was Malik and he showed us all the way up to his room. An ex-boss of mine works at the Hotel and put in a good word for us. We might be on the 4th floor but we are in a one bedroom suite with enough room for a kitchenette, a bar, a four seat dining table (with wine, huge fruit bowl, chocolate and pralines), lounges and a cartwheel and that was because we went out on to the balcony, before the curtains were pulled back. Our balcony is on the side of the Hotel (all suites run up the side of the Hotel) and in the distance? The city and Babel (I’m so calling it that from now on). Out the window on the other side? The Burj Al Arab which, even with it’s light’s off takes your breathe away.

Welcome to Dubai, complete with rubber ducky in the bathroom (I want him). 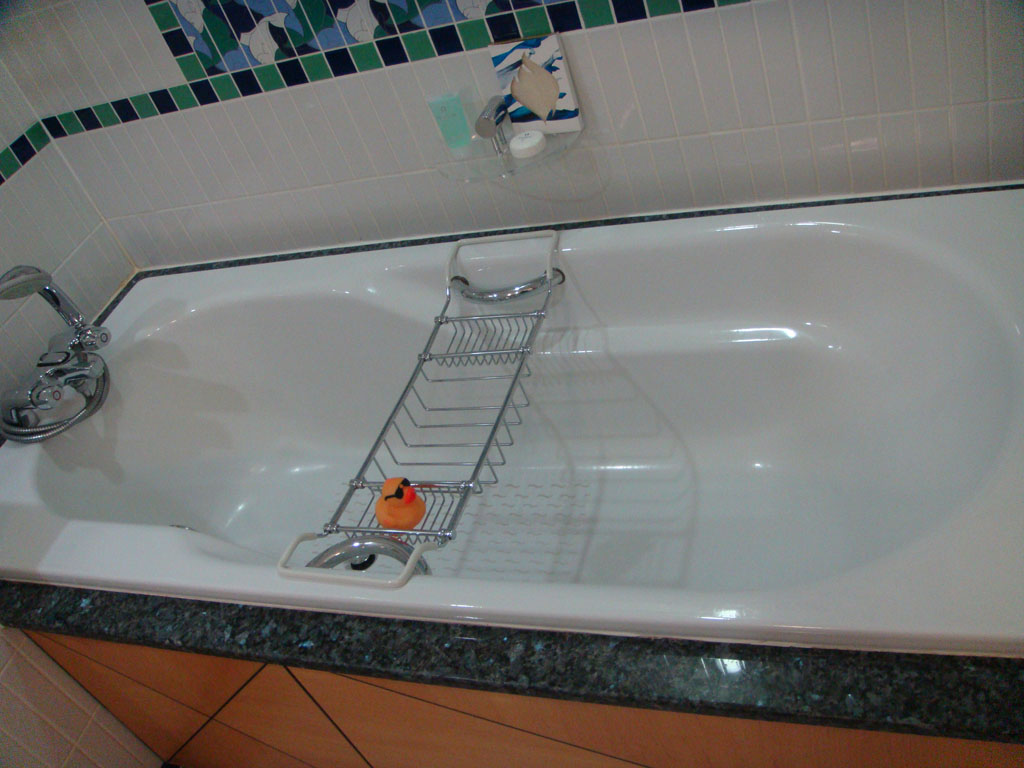 ***Wow. Now I’m only one day behind. I never expected to write two blogs tonight. It’s 1am. I guess when things roll, they just keep going =)

You might be behind a curtain stuffing your face like I am but cultural respect goes a long way.…