Since there was nowhere to be in the morning I took my sweet time. Stroll to the beach for a few happy snaps, went to the lap pool (this time making sure that I had an umbrella) and started lazing the morning away which was very easy to do. I think I finally left at about 3pm or 150 pages into my book. I had to get ready to hit the town.

On the Hotel’s recommendation I hired a taxi (I had my own personal driver, he was so cool) for under $50 for 4 hours (including tip, I was very generous in RMB) and headed to the Cable Car. The first station of the Cable Car is 625m up and it’s a very steep ride. There weren’t many tourists around and what I really mean is there weren’t many Westerners, mostly Muslim families and a guy that clearly bought his three wives for a bit of a treat (the wives were all dress in black, one with her whole face covered). The material looked heavy and on a hot afternoon I had to wonder what that was like. The first station had an amazing view looking out onto the south part of Langkawi, or at least I think it was south, my sense of direction might be completely askew. The Hotel is on the West side of Langkawi and from the vantage point I could just make out the beach that the Hotel sits on. By the time I reached the second station I was up in the clouds with the view below. You could see the clouds rushing by you, cool and nuts. Up the top is a curved sky walk suspended above the cliffs, complete with all assorted weather warnings of rain, thunder and lightning.

I was down the bottom with a lot of time to spare before dinner, my taxi driver was there and he suggested I walk around for a bit (there were some cheesy tourist shops to look at). Anyhow a little while later and my wallet intact we headed over to a place called BonTon for dinner (this was on the recommendation of Aidi).

Aidi: laughs “No, they just have many.”

This place is not near anything, it’s inland and I wasn’t concerned because of where the recommendation was from, but seriously if I had have been going in blind I would have been slightly concerned. From the street it looked no more than a dingy farming area with a couple of buildings but boy that changed quickly. Once inside it opened up to this very funky resort that I can’t even begin to describe. Aidi hit it on the nose, this was my style to a tee.

The little dogs and cats were running around having fun. Oh, I should explain, the owners use the Hotel as a refuge for dogs and cats, so cool. I was the first person in the restaurant (Cable Car closed at 6 and I had to have dinner at 630). I ordered a Pineapple Caphrinha which was just the start of me mixing flavours that evening.

Entrée was Haloumi crusted with pistachio with a green salad, absolutely delicious and looked so funky on the plate. Main was chicken with sticky rice, pineapple with chilli the flavours mixed together to form something new and was easily the most memorable meal of the trip. The owner was such a character, he wore a WWF t-shirt and told me I must have been a naughty child when growing up because I didn’t eat my greens. I reminded him that I just ate the salad and then he convinced me to have not only chocolate ice cream for dessert, but a chocolate brownie as well. 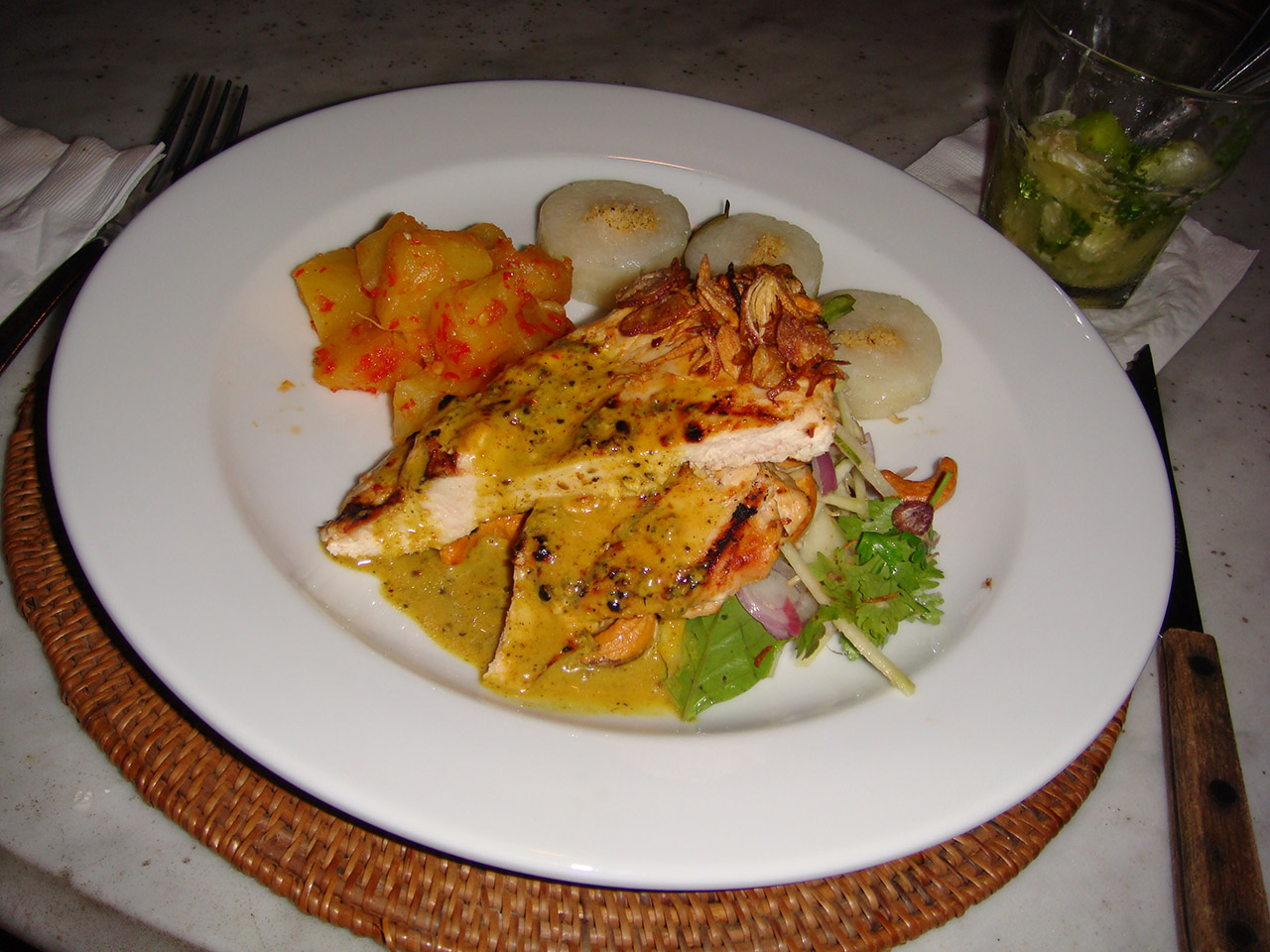 Sunset over rice fields, the quiet serenity of a near empty restaurant, the food and the cats: It was a great night.

October 2007 - Singapore & Langkawi So, I’m sipping a Pina Colada looking out over the water, on…

October 2007 - Singapore & Langkawi Today started with a quick bowl of cornflakes and the Mangrove Tour. Myself…