NB. Writing this was next to impossible.

Earlier that morning we had scouted out our meeting place down near the Vatican Museum. I had hoped when watching the hundreds of people queuing to enter that tonight was going to happen. Months of researching and planning and although I was quietly confident I didn’t want to hope without a little doubt. But I wouldn’t find out until later, there were hours to fill in before then and another place to be.

And the other place to be was where we would find the queue.

St Peter’s Basilica. We queued from the back of the Piazza for the security check, which didn’t take half as long as I thought, then we were more than less able to enter. 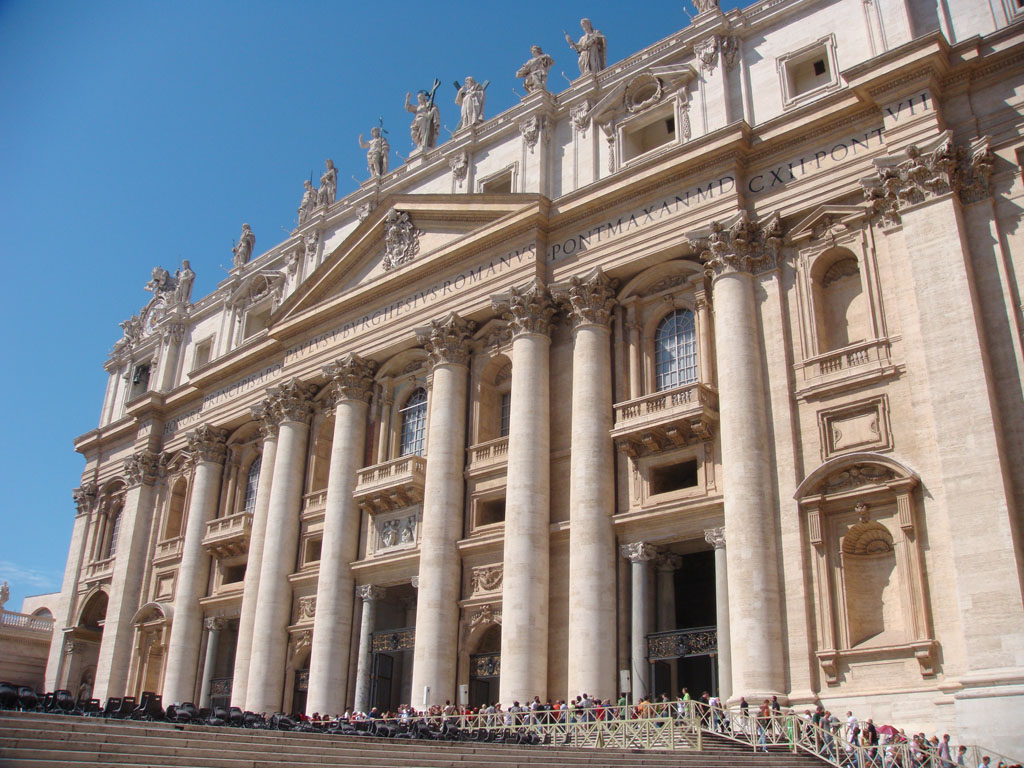 The church had a LOT of money. They also had a Pope that said sure, take the stone from the Colosseum to build it. Priceless thing torn apart to build another priceless thing. It blurs the lines that’s for sure. Once again I’m going to opt for photos to show its grandeur (and the Swiss Guard in the prissy uniforms that do nothing to show how hard core they really are). 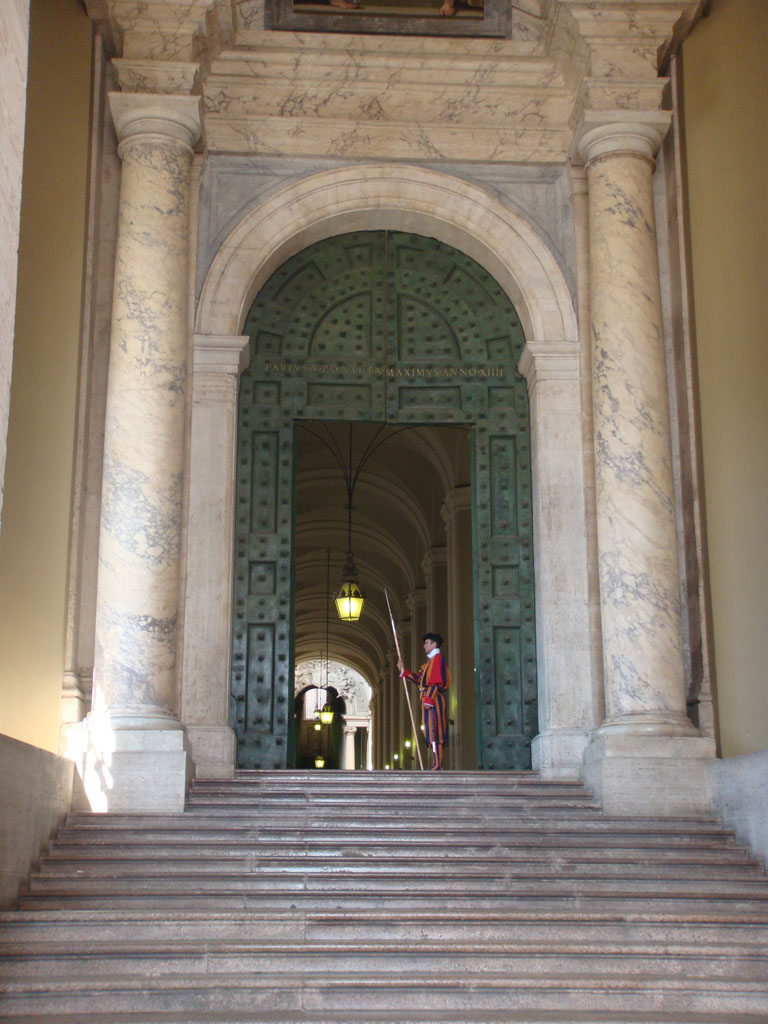 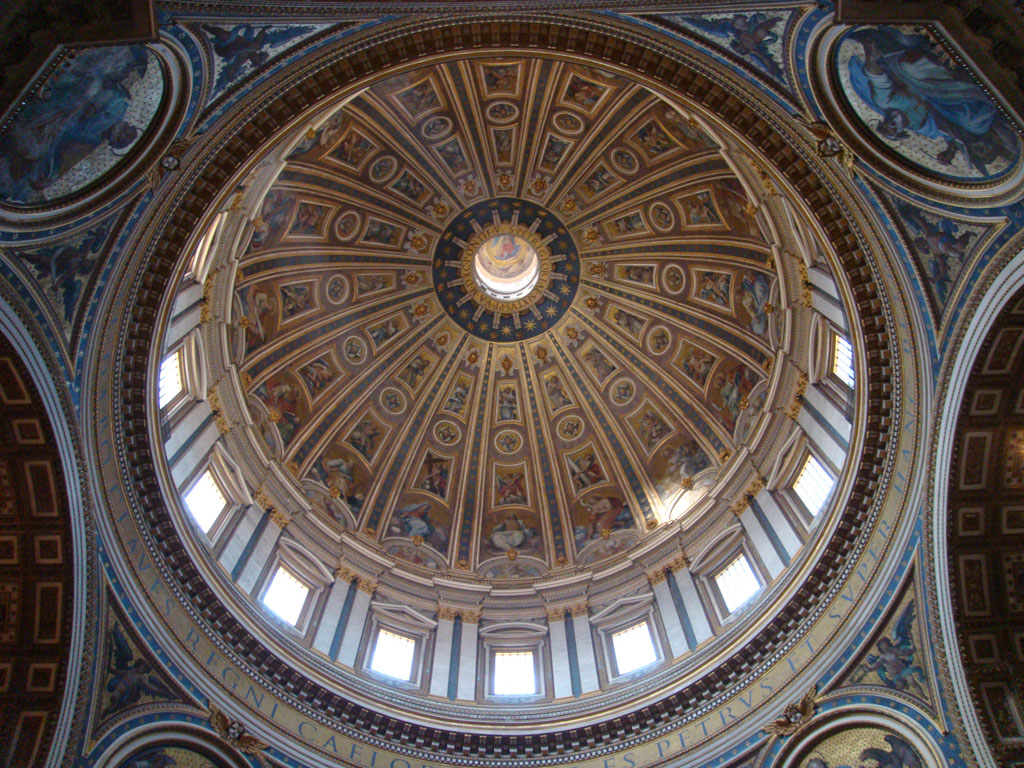 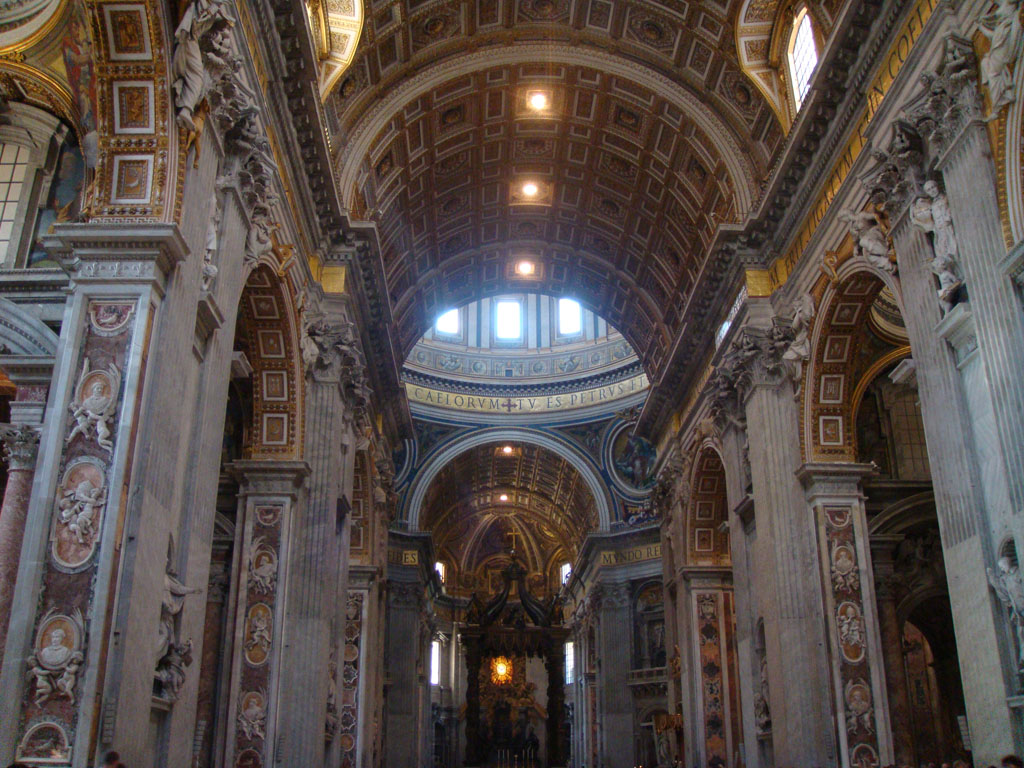 Now, we needed to find the Dome, well we needed to find that queue of people. At first it was bad, we were out in the direct sunlight in the middle of the day and MAN it was hot. None of us had water but the queue seemed to be moving along. Inside the doors and shade was found, a little further on still in the shade but back outside the queue stops. We spent a decent hour waiting to buy our tickets from ONE ticket office. We laughed at two american girls trying to bat their eyelids at the security guard to skip the queue. With a smile on his face he sent them packing, Dad told him good job.

Even if you take the elevator to the Dome it is still 320 steps to the top and Mum is still bringing up that fact…not that the steps bothered her but they were narrow and airless (what you would expect of a building completed in the 17th century). We reached the top and admired Rome for up on high. See picture here. 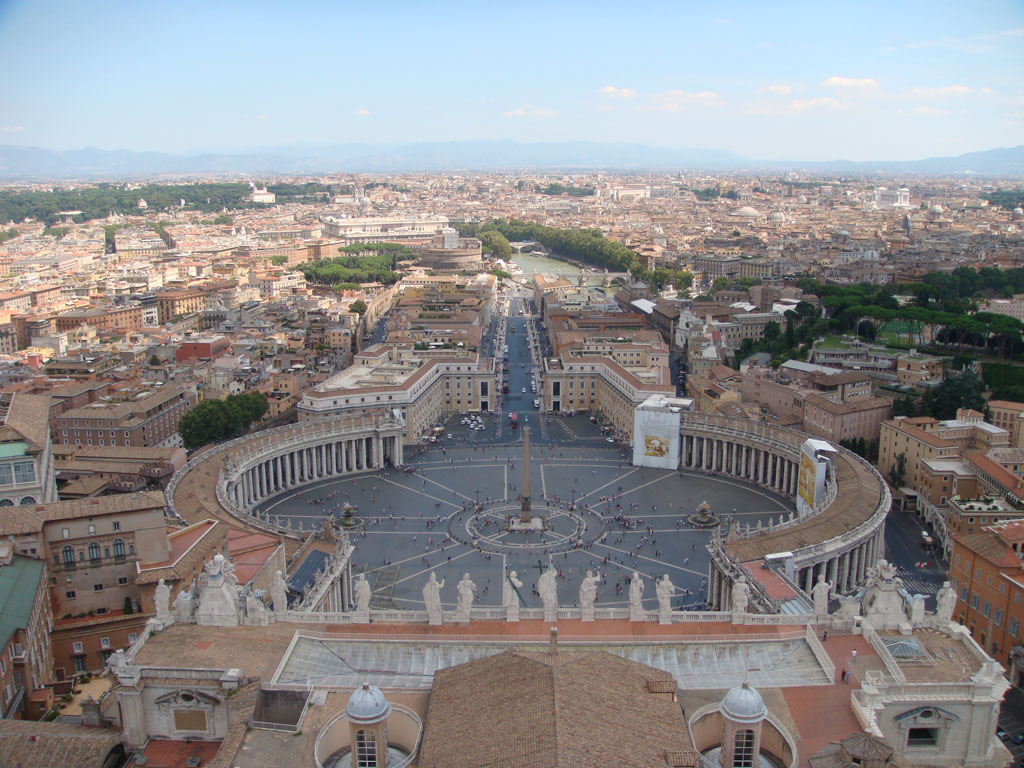 Back closer to the ground and we headed back to the Hotel for a granny nap, via Via Veneto for a spot of lunch and for a place that is called Sweetbites, it wasn’t very sweet. The people that worked there clearly loved their jobs. One girl must not have started work yet and was in front of us nearly crying on her phone whilst smoking a cigerette, there was something weird happening between the waiters and the people in the shop next door, they ran out of at least two things whilst we were there and one of two waiters was sent to the supermarket. How do I know all this? Because we waited FOREVER to get our food (and Mum and I only wanted Gelato).

615pm - Standing outside the tour office which was all closed up, another couple clearly waiting for the same tour as us. We waited about ten minutes before being joined by our tour guide and the tour owner/operator.

655pm - We are standing outside the entrance to the Vatican Museum, the crowds have all but disappeared and we are the only people standing outside. The bolt slides. The giant brass doors open, we are ushered inside, the doors close.

A family of 4 from Calgary, a gay couple from the states, the 3 of us, a new tour guide for the company and his wife (so he could familiarise himself with the timing), one tour guide and one security guard. That was it people. We stood in the enormous entrance area as they told us this tour would include areas currently closed to the masses.

Our tour guide was an amazingly enthusiastic American. Jay, who made every part of the museum come alive.

It began with a walk down the long corridor, the old Vatican Library, the cupboards on either side that used to house the books that were now two floors below us and strictly controlled. Jay was a man on a mission, he knew exactly where we wanted to be so he’s fast walking down the corridor giving us a low down on what was happening in the frescoes above our head. Pope did this, they did this, Pope retaliates, they retaliate, New Pope, fixes an aquaduct, moves an obelisk (which was apparently ‘in’ thing for a pope to do for a while). Well you get my point, years of history in a few seconds.

He stopped then only to point out pictures of christian families, on coins and the like from before the time that Christianity was legal. Next was some artefacts from Pompeii, glass bottles and the like. Jay is not one for taking things out of context, he’d have preferred to see them left in Pompeii, I see his point and agree.

We hurried downstairs and all of a sudden walked out of the stairwell into the Sistine Chapel.

Silence, absolute silence. Jaws drop, necks crane up and the realisation sinks in. We are the only people here. The eyes begin wandering from exquisite fresco to exquisite fresco, time slows to a halt, the careful shuffle of feet the only sound in the room. This lasted for at least five minutes, though it felt more like ten.

Like a story unfolding before our eyes Jay begins to explain the frescoes that run around the walls. Speaking of the Florentines, the Pope(s) probably plural, the things that seem out of place on the wall. Then he speaks of conclave, of the Crying Room that sits on the left side of the alter, the place a newly elected pope retires to after accepting. Jay says he has been in there once, five different sizes of red shoes, three sizes of white robes all lined up like they were ready for goldilocks to try on. We lift our heads to the Last Judgement, what Michelangelo thought would be his last work, Jay spoke of the sinners, the saints, that there are no females in hell, that is was censored (the alternative was to pull it down), that it was pulled down and redone by Michelangelo because he wasn’t satisfied. Jay said that the idea the pound of flesh is Michelangelo’s self portrait is merely a 20th century rumour, as there has been no evidence prior to that point suggesting it is… I refer to the skin of a man being held in the middle of the frescoe. To tell you the truth The Last Judgment is, well beautiful, but depressing, it doesn’t seem to be a celebration of faith, more the heavy burden it carries.

In daylight the use of photography is strictly forbidden and you will get kicked out of the Sistine Chapel if you even raise your camera. At night the security guard sat in the front corner, waiting patiently for Jay to finish. We were in there for at least half an hour AND no one stopped us taking pictures (discreetly). After he finished with the Last Judgement he moved to the roof, pointed to the corners where you can actually see the blackened walls that haven’t been cleaned or suffered water damage. We then move to the back of the room and he runs through each of the pictures along the ceiling, Michelangelo’s pictures of the book of Genesis, including God creates Adam and drunken Noah. Brain overloaded and we were only about 40 mins in. 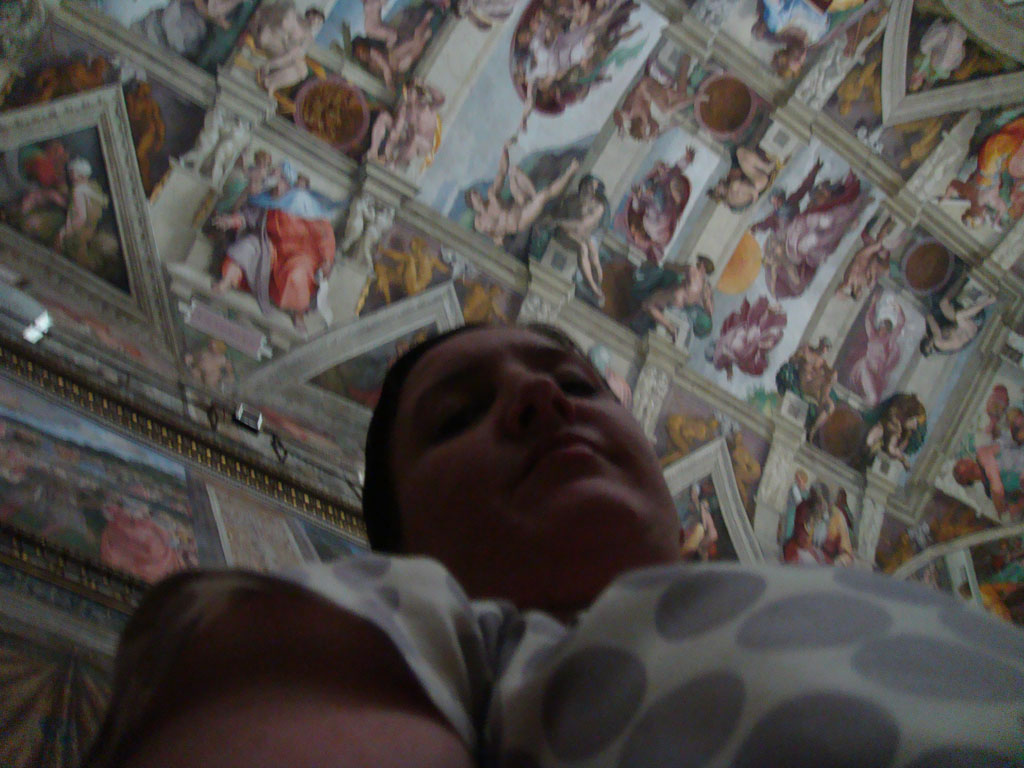 The point of all this was simple. I need to find me a book and I need to read up on all this.

With a last look at this amazing site we left the Sistine Chapel and headed for the Raphael Rooms, which we walked straight through, heading for the Nicolline Chapel. Jay explained that it had been closed to the public for a couple of years due to an unsteady floor and that he had only been in the Chapel about twenty times. Seriously it is tiny, like anymore than the dozen people in there would have made it cramped. Jay told us the story of St Laurence, when told to bring the riches of the church, he brings people, saying that they are the riches of the church, only to get slow burnt on a hot grill until dead (nice). At the end of the story which forms from six pictures on the wall he notices something that he had never seen before in the last picture, St Laurence in his cell before death, converting a prisoner, needless to say Jay was very excited. He was also excited about the graffiti on the wall. I said that some of it looked Japanese, but he corrected, it was mathematics, about four hundred years ago people were writing on the walls of the chapel mathematical problems and there is was (almost) as clear as day.

We took the Raphael Rooms with gusto, more brain overload. We moved into the uberly long corridor that housed the map room. The corridors were dark, only minimal lighting was used and with no one ahead or behind you it was a rather haunting feeling, not that I didn’t love every second of it, because I NEED to see more museums like this (no people, after closing, sun setting). 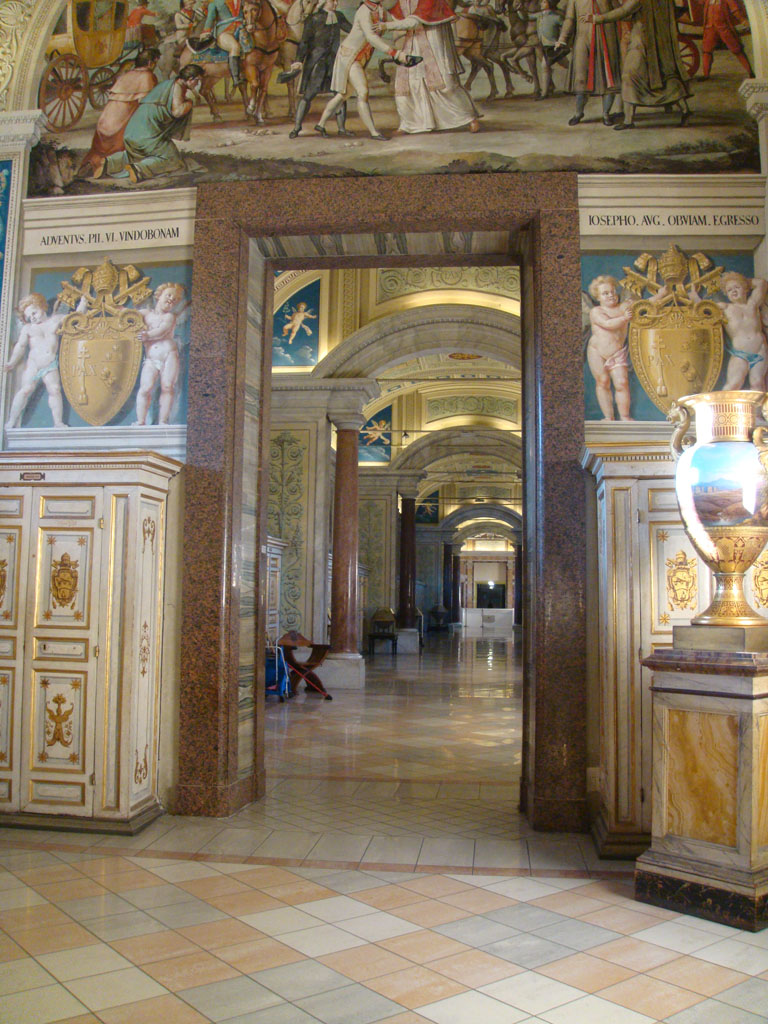 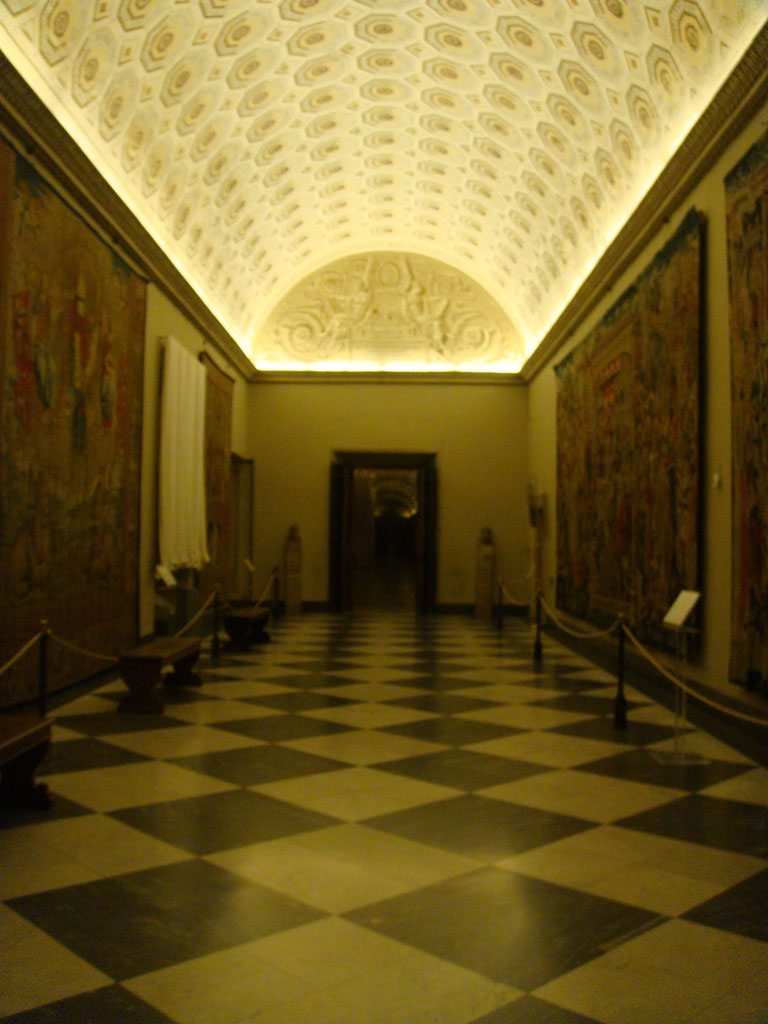 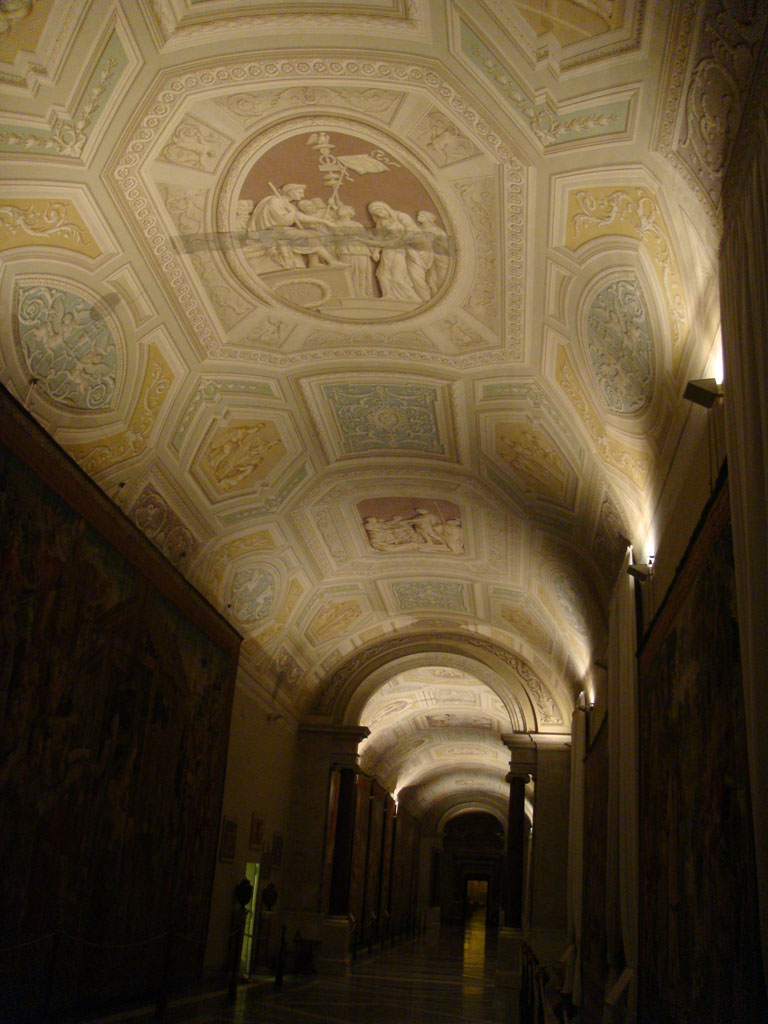 Jay said he had never spoken so much in the map rooms and that someone should have been taping him. Clearly he was thinking this was one of his best tours =) I’ll give him that. We moved into the statue room and the Gatekeeper with all the keys to lock the doors (and let me tell you, there are many) was behind now with the security guard, or time was almost up.

But just before we finished we saw this….. 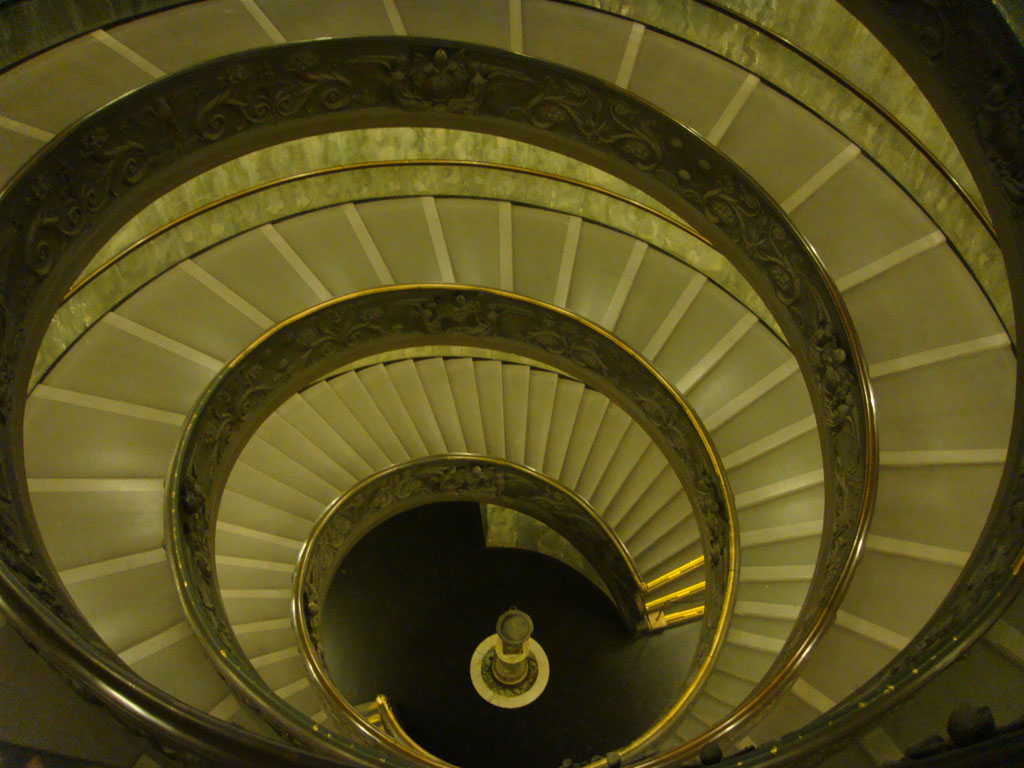 Like I said NO ONE there. We got into the plushest elevator I have ever been in with enough bench seating for the twelve of us and shortly after that we walked through the exit, the bolt sliding behind us.

I can’t tell you how amazing this was, all I can say is spend the extra money and do it. The corridors were dark and empty, the souvenir shops along the way were unmanned, we saw a handful of cleaners and nothing more. It is truly one of those experiences that leaves you awestruck, speechless (well not entirely but I can tell you this was the most difficult blog to write).

We sat on the steps of St Peter’s Square afterwards, trying to absorb, comprehend what we had seen.

Chasing the Daylight Away