I figure the only way to describe is to litter the page with pictures again. By the way it wasn't us driving this... that would have been hairy and stressful and we never would have appreciated everything that was to see, so we had a driver, his name was Joseph and he took us around in a Mercedes E Class for the day.

So here is the view you see after coming over the mountain top and onto the Amalfi Coast. 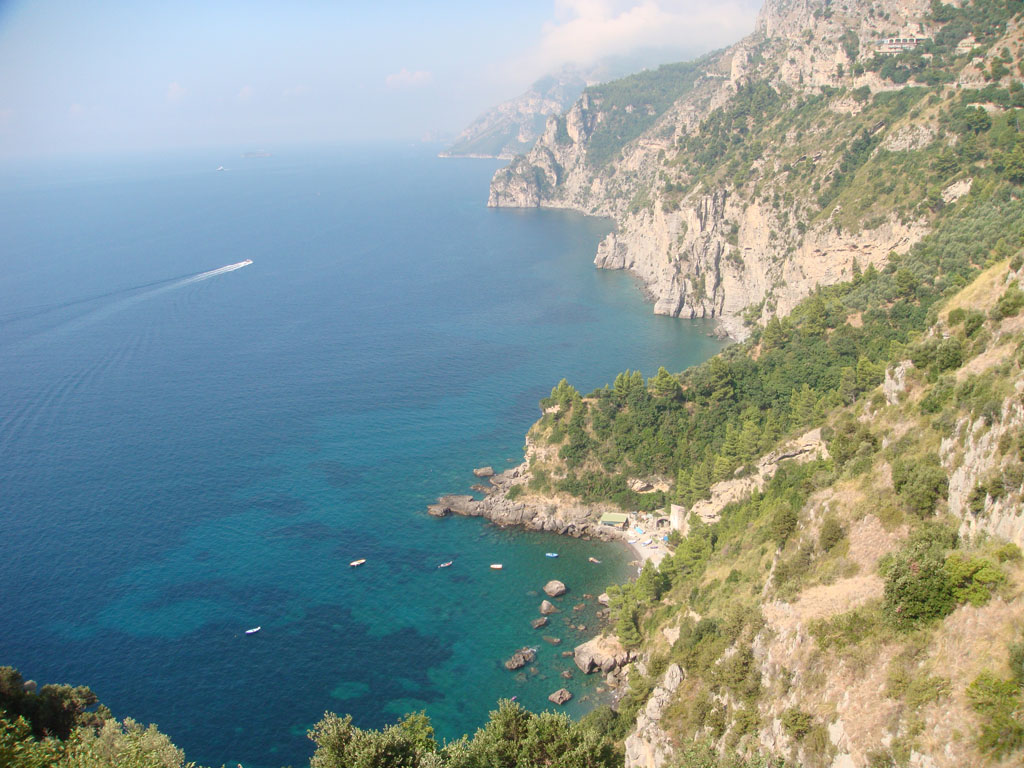 300 steps down to reach tiny, deserted beaches... Needless to say we didn't do that.

Keep driving around the coastline and you hit the first of the three most popular towns on the Amalfi Coast. 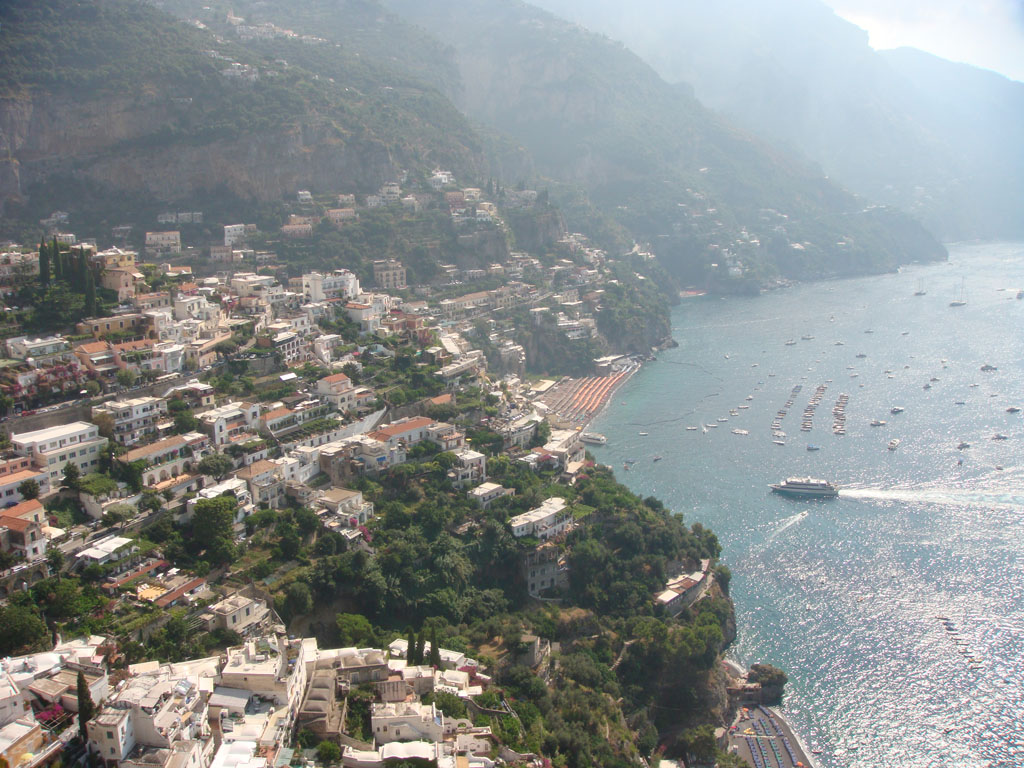 This is Positano, a picturesque seaside town/city. One way in, one way out and a lot of pedestrian lanes in-between. At first we actually drove around Positano to stop off at a ceramics store just after it (Mum and I were on the shop for some less touristy ceramics, we were successful). We left when Mum and Dad were tossing up on whether to buy a VERY special original tabletop for the backyard. With that on our mind we headed down to Positano where our driver parked in a tiny parking station where the poor guys working there would spend their day shuffling cars. It was still a decent 15 min walk through the laneways and the people down to the beach and that my friends was the closest parking that I saw (there wasn't a lot of it either) I honestly can't imagine what would have happened if we had driven ourselves. There is no space on the roads, for parking or driving and certainly no mega storey carparks.

I insisted on a walk across the black, rocky sand to dip my feet in the Mediterranean which was refreshing considering the +30 degrees at that time. Mum was starting to feel unwell from all the winding roads, so we sat a while and lapped things up, then had a drink in this hole in the wall cafe in one of the laneways... There was a lot of them around. I marvelled at the private and public beaches sitting next to one another, the umbrellas all in pretty rows and the number of inflatable goodies you can buy to enjoy your time in the water.

btw side note I average seeing one person EVERY DAY wearing a Spongebob Squarepants t-shirt. It's unbelieveably strange and a different person each day... boys, girls. Maybe the Italian's do have them in their wardrobe after all =S

Back in the car and back to the Ceramics store where we bought the table top. 10-12 weeks to make and deliver and I couldn't take a photo of what it will look like but trust me... It's stunning. Like I said to Mum if I had my own place (I wouldn't be on this trip but) I would so have bought one for myself.

Five years later - That table never made it outside instead it is downstairs in the alcove of the family home and it is like I said, STUNNING. In many years time it could be the only thing my brother and I fight over inheriting (but then again I was there, so my claim is greater and this blog is proof).

So no more reversing, onwards and upwards and downwards for Mum. Positano to Almafi was not a good ride for Mum. For those that don't know she has never been good with winding roads and although she took a travel sickness pill that morning, by the time we reached the next town of Amalfi she was wondering how she was going to make it back, let alone onto the next village. Dad even suggested cutting it short. I admit to saying nothing because I knew full well what was ahead, but we'll get to that in a second (obviously Mum soldiered on). 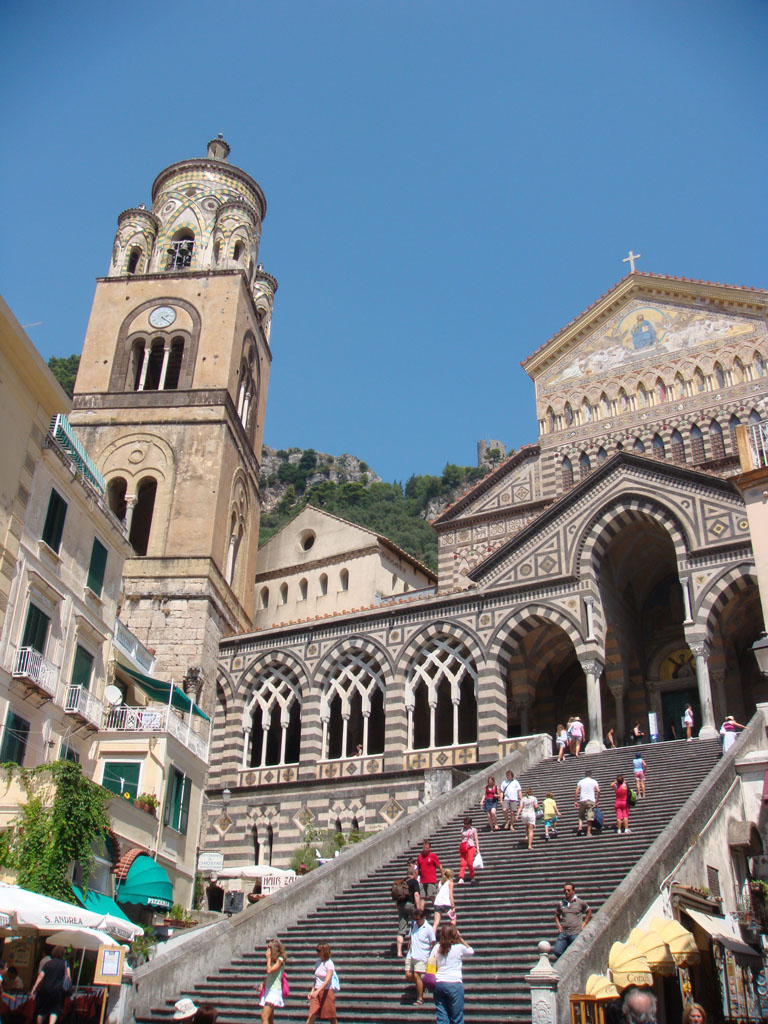 To possibly everyone's relief but mine Amalfi was quite flat. Private Beach area out the front and areas to dock your boat. This time the car made it right down to the water, so there wasn't as much of a view. There was however a very impressive Il Duomo in the main square of the town, about 25 metres from the waterfront.

We sat in a little restaurant on the square to have some Gelato (seriously I'm averaging one a day here... it's SOOOO good). The lady was wonderful, was insistent that we all have more than one flavour each and even suggested flavours when we weren't sure and then gave Mum and Dad a free sample of Limoncello Gelato (which I have to say was pretty amazing). We got chatting and she said the owner of the restaurants Grandmother makes all the Gelato upstairs... they had no less than twenty flavours on offer and all the ones I got to try were delicious.

Meanwhile whilst enjoying the flavour that only a true Italian gelato has these Musicians turn up out of nowhere. Cello, Guitar, Tamborine. Italians in the restaurant next to us had started singing, so they made their way over and started improvising with them. They then teamed up and sang all those Italian classics and by the end of it the singers (who were just people having lunch at the table diagonal to us) were all up dancing. Brilliant.

Next was an Asian Couple taking their wedding photos. Mum was commenting on how tall they were and she was right, the man was tall, but then we saw these... 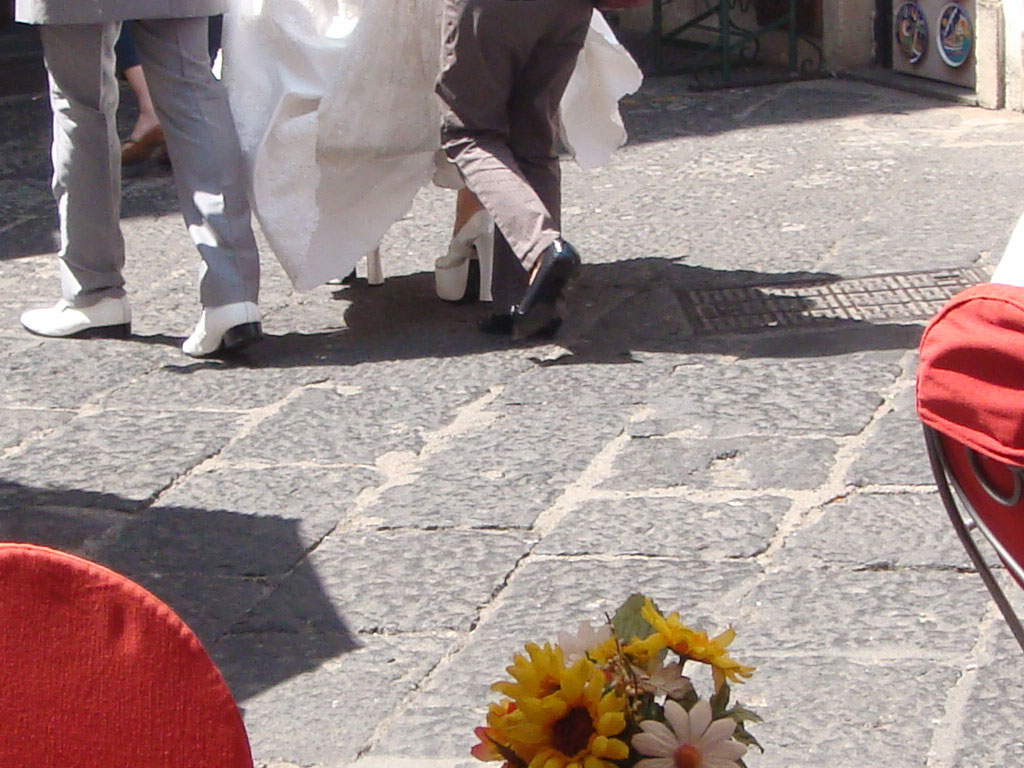 Look closely people because the Bride is wearing... STRIPPER HEELS! 7 inch by the looks of things and the Hubbie might be in for more than he bargained for on his wedding night. Mum and I were in hysterics and Dad couldn't figure out how she was walking in them... The answer was simple, she had a pole to lean on... of sorts.

Anyhow moving on. Like I said Mum felt a lot better after the Amalfi stop and decided to be a trooper and keep going. Next stop would be Ravello, about 7km from Amalfi and up in the mountains, I was a little concerned but everything ended up next to perfect.

Now anytime I had seen a picture of Ravello it was always in the same spot, in the Villa de Rufolo and even though Joseph recommended another Villa, I knew exactly where we were heading... 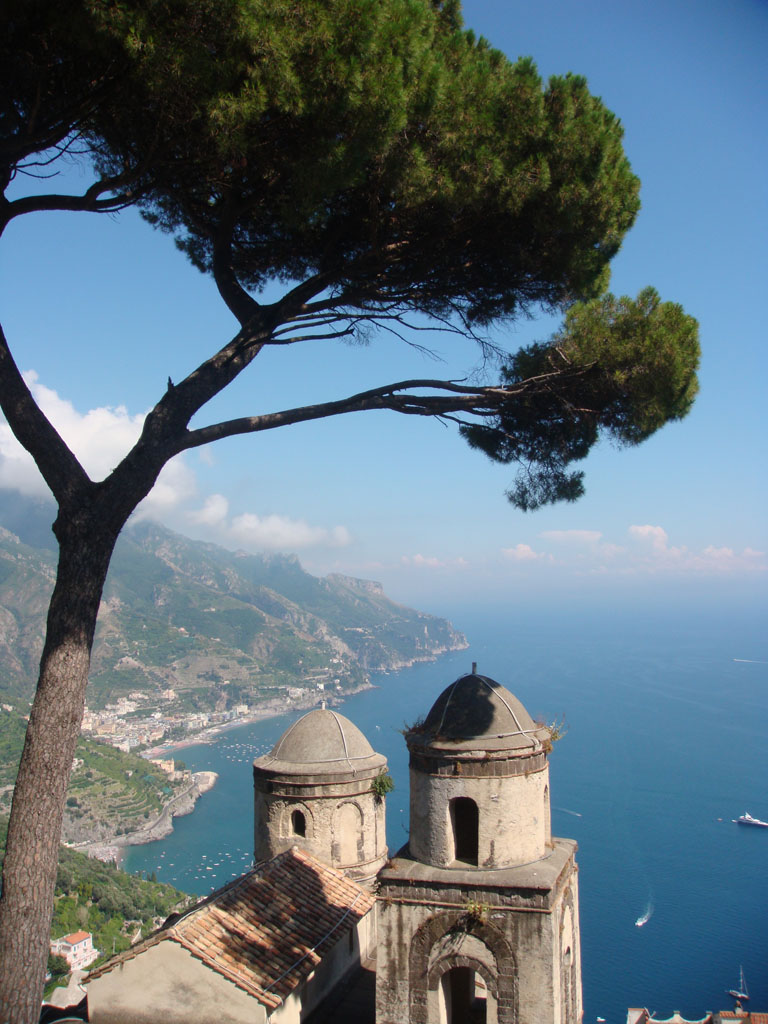 The gardens were gorgeous, the view breathtaking. They have a Classical Music Festival that runs for three months and uses the Villa as a setting. Lets just say this sh1ts on the Open Air Cinema and Mrs Macquarie Chair. Imagine this... 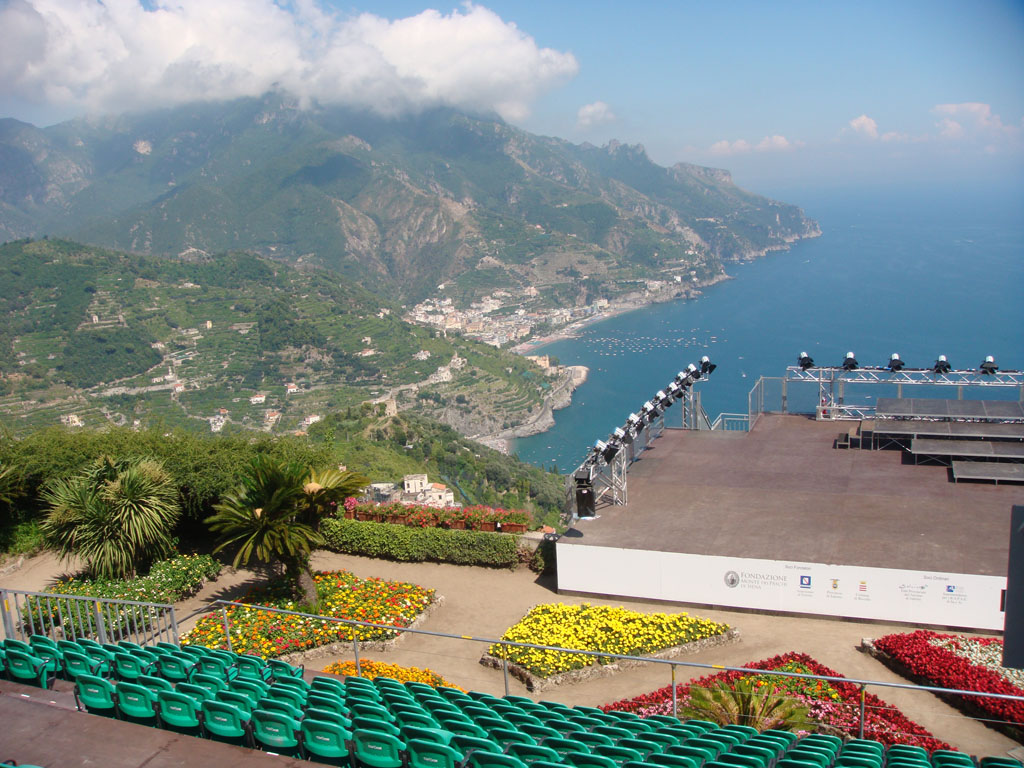 Ravello was beautiful, quaint and the air was so nice and cool. Mum said she wished we had spent less time at the other places and more time there. I would have to agree.

We all (especially Mum) made it safely back to the Hotel an hour and a half or so later. It might have been 6pm but I wanted to go for a swim. It seemed stupid to me that we were in such a beautiful spot and I hadn't gone for a swim, so I went up to the pool expecting to see no one and was surprised when it looked like half the Hotel was still by the pool soaking up the last couple of hours of sunlight. Had a quick swim and headed back to the room, cracked open a bottle of bubbly that had been left for us on our arrival and watched the sunset in a bathrobe looking out on to the water.

By this stage we were all BUGGERED so we thought go up to the bar, order a snack. We headed upstairs, no makeup, air dried hair. To say I looked heinous was an understatement. Oh I have forgot to mention that all of us seem to have caught something on the plane, runny noses, sneezing, generally feeling like crap. Who gets sick like this when its 30 degrees outside!?! Go away sickness, you will take NOTHING away from my holiday. But back to the bar... problem... no snacks, and we were so not going to the main restaurant seeing as the food was average and we were not dressed for the moment, so on the Concierge's recommendation we headed out.

They had closed off the main street of Sorrento to car traffic, so it was actually very nice to get out and enjoy our last evening. We made it to the restaurant. Now there seemed to be two areas for the same restaurant, one very, very casual and the other more like a restaurant. We think we were meant to be shown into the restaurant when instead we ended up in the other. Dad and I were just hungry but Mum was 100% committed. We stayed, 2 pizzas, 2 litre bottles of water, soup and a main meal later we were barely 30 Euro out of pocket and that I thought made up for being directed into the wrong side of the restaurant. Let's just say it wouldn't be a place a five-star Hotel Concierge would recommend.

Another Coconut Gelato later we were back in the room beginning to pack. Tomorrow Roma.

The Isle of Capri