Of course that required a stop at New York, New York to go on the rollercoaster (again). So $14 got me one ride and if I had have known that there was no longer a rollercoaster on top of the Stratosphere I would have gone for the $25 all day pass. It was just as good as I remember it, the view was great on this very clear day and the corkscrew into the flip over… Still gold.

Got down to the Excalibur and went inside to have a look around. It was just after 10am and it was already hot, hot, hot outside. Excalibur was nothing special, I merely did a walk through, next was the Luxor and that has seen better days. The Atrium where all these rides were before and was the hussle and bussle of the Hotel was next to deserted. There was some construction happening and hopefully that was to bring the Hotel back to its glory days. The Human Body exhibit was advertised as using real human bodies with a disclaimer below saying that they can’t guarantee the use of real bodies in the exhibit. Funny.

I wasn’t heading out to find shops today but to stay in the air conditioning I moved from the Excalibur to the Mandalay Bay via the moving walkways. Between the Luxor and Mandalay Bay there are a little group of shops which were pretty cool to look at. Urban Outfitters took a bit of time as I found a t-shirt that said “Barak da House”, a Domo-Kun, a super deformed Simpson’s character that I gave to Trent. There was also all these cool Star Wars figurines but sadly the coolest, Darth Vader was sold out. I bought a water at Starbucks that cost me $4.71 (crazy). I could go out on the street and buy ice cold water for $1 (which Trent later figured out was quite the money making business as they would buy water for less than 50 cents).

From the Mandalay Bay I went and had a look at the Four Seasons, it was SO quiet down there. Less craziness than the rest of The Strip. Since I made it down to the very bottom of The Strip (well at least for now, there’s a couple of vacant blocks down there) I turned around and started making my way back to the Bellagio to see if Trent wanted to head out at 2pm. I stopped off at the M&M store and got my 22 different colours of M&Ms and then continued up to Planet Hollywood and looked inside the Miracle Mile Shops. Not as good as The Forum Shops or Fashion Mall, but it wasted an hour. 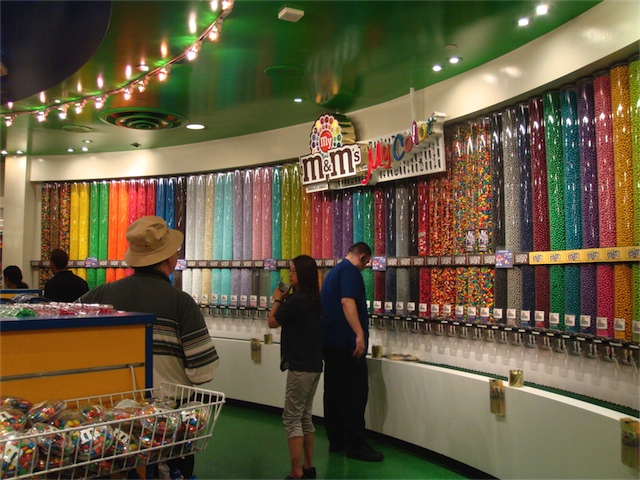 Met Trent back in the room and padded his blisters to head out to Stratosphere. At first the plan was to catch ‘The Deuce’ bus that runs down The Strip but we got to the bus stop outside the Flamingo, stinking hot and the next bus that comes along was packed so instead of sweating it out at the bus stop we started walking. As we were walking we saw an entry to the Monorail that runs behind The Strip and thought if it got us near Stratosphere then that was the way to go.

It dropped us about two blocks away at the Sahara Hotel. The whole area just felt deserted. Along the no shade street to Stratosphere was lined with tattoo and piercing shops, a dingy wedding chapel next door to a tux and dress rental (oh so classy).

To get to the Tower you have to buy your ticket then walk ALL the way through all their crappy little shops. Around and around you go before you get to Security. A metal detector and bag check later you are standing in front of a green screen to have your picture taken (forced, fortunately the purchase of the photo was not). It might have been popular in its day but there were no queues today, straight up in the lift. Great view of Vegas but not something you need to do more than once. 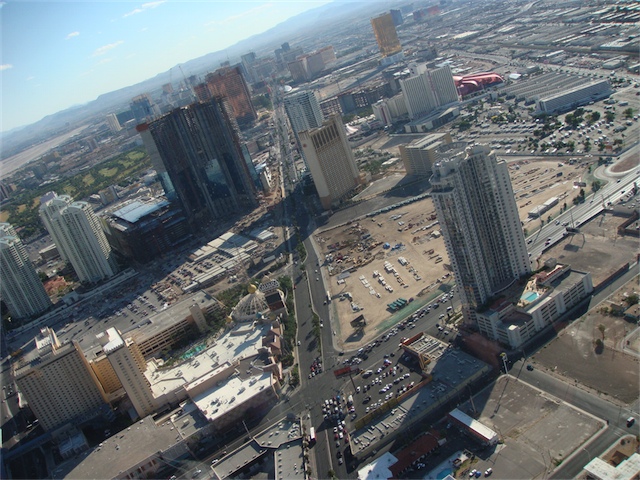 I left Trent to look at the Nascar Exhibition in the Sahara and I headed back to the Hotel to start getting ready for the moment I had been looking forward to the most on this entire trip, I was going to see ‘O’ again.

At 7pm we headed down to the theatre, conveniently located inside our Hotel. Awesome seats about halfway back in the first section on the aisle. Spoke to this nice Canadian guy sitting next to me. He was asking about our states and territories and off the top of my head I said seven states, two territories. Then I listed them and realised it was six. Hehe oops, Trent was laughing and he assured me that off bat he would have known that it was only six.

Anyhow, let the show begin. From the Clowns pushing through the crowd with a gigantic inflatable ring, the hand that beckons the audience into the adventure through the curtain, the curtain that flies into the centre of the stage and exits through the back; to the Russian Swings and the High Diving, the clowns on the rooftop; the piano sinking into the water and the curtain flying out of a basket in the middle of the stage. I was in heaven again and it was hard to believe that it was 8 years ago since I had seen it. Even sitting in row H we got a little spray from the rain scene, though not as much as the front row that became a gag in the clown skits.

There were some things I noticed, they were mixing the music, so although the music was the same as the original soundtrack it wasn’t in the same order and the tracks were cut into pieces. Fortunately my absolute favourite part (the sinking piano) remained the same. The Ship that used to have a bunch of guys trapeze and use parallel bars, sadly this piece was changed and included women. The first time I saw it the stunts were amazing, they were everywhere switching between catchers and the bars, this was very average, it was almost like they were new people that weren’t as confident as the original guys. The Russians Swings however was much better than I remembered. Just Stunning.

I was so happy afterwards, as a whole it was just as good as I remembered. I was mesmerised, it remains the best show I have EVER seen. KA was good but ‘O’ is still in a class of its own. The best part of all was that Trent now understood why the family was raving, he thought it was great too (especially the staging). His favourite part was the High Dive and he loved how the stage pieces sinking deep for the diving to rising to the top to allow people to walk on the stage like there was no water below and everything inbetween.

We hadn’t had dinner so we went to Trent’s suggestion of Spargo at Caesar’s Palace where I had a delicious Pepperoni Pizza and Trent had Ravioli. I also had this great Bellini, probably the best I have ever tasted. We sat and talked about ‘O’ and Cirque Du Soleil, the perfect ending for a great evening and the final night in Vegas.

We walked back to the Hotel where I was going to place some money on a Roulette table but everything was packed and I wasn’t that motivated. It had been a long day of walking and even before I got to ‘O’ my feet were screaming at me. So I went back upstairs and packed my bag with all my shopping. I think I need to get another bag for the trip home. It’s now probably up around the 28kg mark ☺